Political Calculations
Unexpectedly Intriguing!
June 19, 2017
Roiling Under the Surface with the S&P 500 in Week 2 of June 2017

The Federal Reserve surprised no one with the announcement that its Federal Open Market Committee (FOMC) had voted to hike U.S. short term interest rates by a quarter point.

For our dividend futures-based model for forecasting the S&P 500, investors appeared fully focused on 2017-Q2 in setting stock prices on the day of the Fed's announcement, which given the influence that the Fed has over the future expectations of investors, was to be expected. 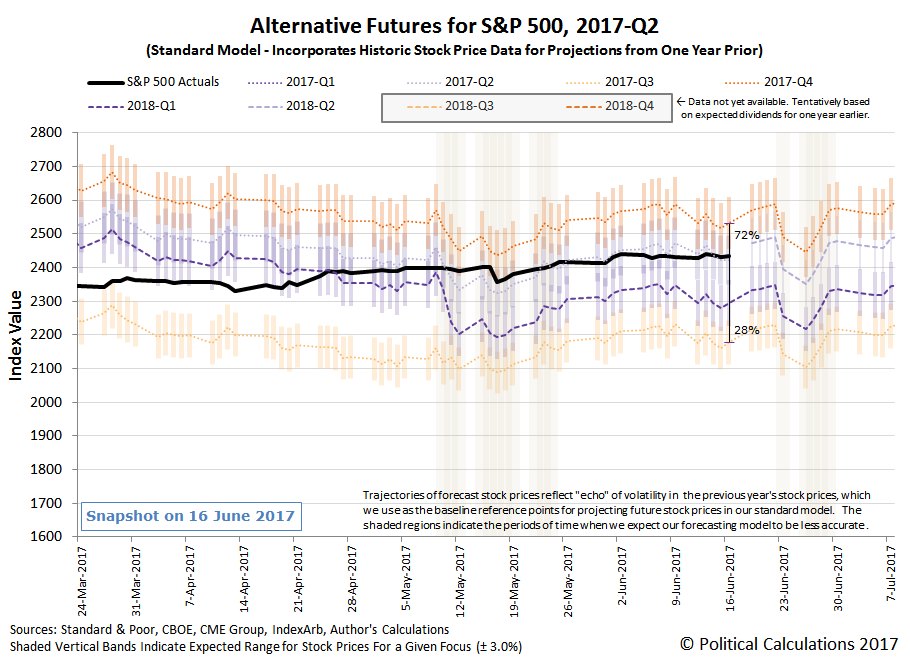 But what happened after that is somewhat telling. Although the top line number for the value of the S&P 500 didn't change much, the action of stock prices in the days following the announcement combined with the week's major economic news (and to be honest, in the weeks preceding the announcement) suggest a division within the component companies that make up the index has intensified over what we observed in Week 1 of June 2017.

Where there that gets interesting is that what the S&P 500 is communicating about the expected timing of the Fed's next rate hike action is very different from what other futures-based models are communicating.

Our model suggests that investors are currently betting on 2017-Q4 as the likely timing for the Fed's next rate hike, currently giving about a 72% probability of that being the case, with the remainder banking on the Fed taking action in 2017-Q3. CME Group's Fedwatch model however is currently giving almost the opposite odds between the two quarters, with an 84% probability that the FOMC will act to hike its Federal Funds Rate at the conclusion of its 20 September 2017 meeting.

Update 2:30 PM EDT: We stand corrected, where we appear to have gotten our wires crossed in reading the FedWatch FFR futures! According to CNBC, "Market expectations for a September rate hike are just 13 percent, according to the CME Group's FedWatch tool." That's a lot closer to what the dividend futures are telling us.

It will be fun to watch how both indicators evolve over the next several weeks. From the perspective of our dividend futures-based model, it will take some substantial good economic news to boost the odds that the Fed will next hike interest rates in September 2017, which would be accompanied by a decline in stock prices. Conversely, if that news is bad and the Fed is compelled to delay its next action until later in 2017, then the S&P 500 would find itself drifing sideways to slightly higher in the weeks ahead.

Right now, we think that the context of the current market environment from the major market news stories of the second full week of June 2017 are supporting what dividend futures appear to be anticipating for the future for the S&P 500, but here they are so you can judge for yourself.

For a succinct summary of the week's positives and negatives for the economy, be sure to check out Barry Ritholtz' latest!