How likely is it that the U.S. economy will go into recession sometime in the next year?

The combination of rising short term interest rates and falling yields for long term bonds is often considered to be a harbinger of recession in the U.S. economy. And with the Fed having left its Zero Interest Rate Policy behind while the yields on long-term U.S. Treasuries have been falling in recent weeks, we thought it was time to dust off the version of the Recession Probability Track visualization tool that we introduced in September 2007 to indicate the odds that the U.S. economy would be in recession up to a year later.

Back then, the historical data we showed in our Recession Probability Track indicated that the odds of a recession beginning in the next year had already peaked back at 50% back on 4 April 2007, which is to say that it was signaling that there was at least even odds of the U.S. having a recession begin by 4 April 2008. As it turned out, the National Bureau of Economic Research determined that the U.S. economy expanded all the way through December 2007, before beginning to contract into recession in January 2008, where what we now call the "Great Recession" is considered to have begun in December 2007, coinciding with the peak of the preceding period of economic expansion, marking Month 0 of the recession that would last until the NBER determined that it bottomed in June 2009.

The last time we showed the Recession Probability Track was 6 November 2008. Just over a month later, the Fed would implement its Zero Interest Rate Policy, which would render the Recession Probability Track useless as a recession prediction tool for the next 7 years, until the Fed stopped holding its thumb on the zero end of the scale in December 2015.

Today, some four small interest rate hikes later, the Fed can still be considered to be applying pressure at that end of the scale, but not so much as to prevent the Recession Probability Track from registering a non-zero probability.... 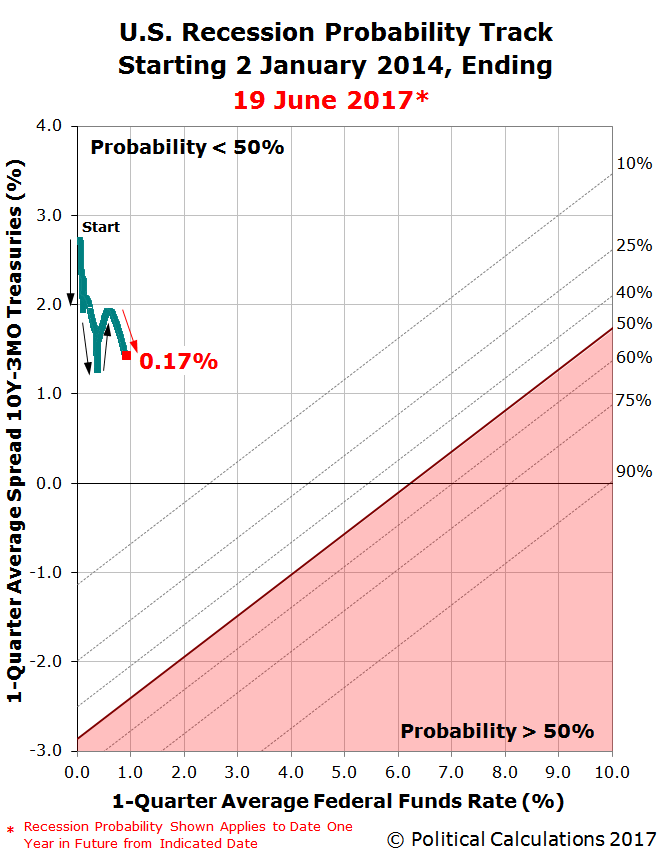 At 0.17%, we find that there's very little probability of what the NBER might someday declare to be a full-blown recession breaking out in the U.S. economy sometime between now and 19 June 2018. At least, not one propositioned on Jonathan Wright's yield curve-based recession forecasting model, which factors in the one-quarter average spread between the 10-year and 3-month constant maturity U.S. Treasuries and the corresponding one-quarter average level of the Federal Funds Rate. If you'd like to do that math for yourself, we have also built a very popular tool to help with that!

That doesn't mean however that the U.S. economy might escape without experiencing some level of distress. As we saw from mid-2014 through 2016 in oil and gas production states in particular, along with some other states whose major industries are linked to the health of that sector of the economy, it is possible for some degree of significant economic contraction to occur without leading to a national recession.

For other takes on the same data trends and what it might mean for the prospects of a U.S. recession, be sure to check out Kevin Erdmann's thoughts on the flattening yield curve and Joshua Brown's perception that flattening is not threatening, as well as Mike Shedlock's contrarian speculation from a month ago.

Finally, we should also note that China has seen its yield curve invert in recent months, where our recession forecasting tool has become increasingly popular among readers there, even though it wasn't specifically designed to consider China's economic situation and history, so we don't know how well it might work for assessing that nation's recession odds.