There is a surprising story that is flying under the radar in almost all of the reporting on the United States' trade with China in April 2017. To see what we mean, here is are some key excerpts from a recent news report following the U.S. Census Bureau's reporting of its foreign trade balance data for the month (emphasis ours):

The U.S. trade deficit widened more than expected in April amid a surge in cellphone imports, suggesting trade could be a drag on economic growth in the second quarter....

Exports to China increased 2.2 percent, but the value of goods shipped to Mexico and Canada dropped 10.3 percent and 9.0 percent, respectively. Exports to Germany tumbled 13.3 percent....

The country imported 229 million barrels of oil in April, the smallest amount since October 2016. Imports of goods from China jumped 9.6 percent. Imports from Germany fell 4.1 percent.

The politically sensitive U.S.-China trade deficit increased 12.4 percent to $27.6 billion in April, while the trade gap with Germany rose 4.3 percent to $5.5 billion.

We selected these particular excerpts because we want to focus in on two aspects of the reporting.

If you read the article in full, you would never know that U.S. exports to China increased in April 2017 by 20.8% over their April 2016 level, which is faster that the 13.6% year over year rate of growth for China's exports to the U.S. 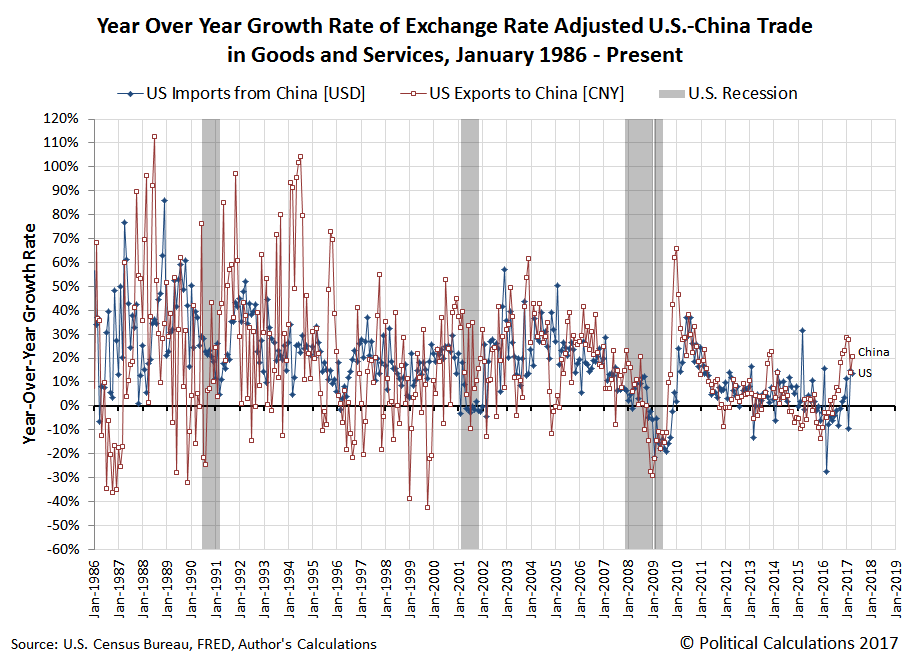 Despite the U.S.' faster rate of export growth, the U.S.-China trade deficit widened because the base value of the goods and services that China exports to the U.S. is nearly four times as large as the value of what the U.S. exports to China. If however the U.S. can continue to grow its exports to China at a faster rate than it grows its imports, that gap will narrow.

That brings us to oil, which has recently become a major export product for the U.S. economy, where China is becoming a very large consumer. [If you're reading this article on a site that republishes our RSS news feed, please either click here to access a static copy of the interactive image showing the volume of oil exported from the U.S. to China in each month from January 1993 through March 2017 below, or just click through to the version of the article that appears our site.] 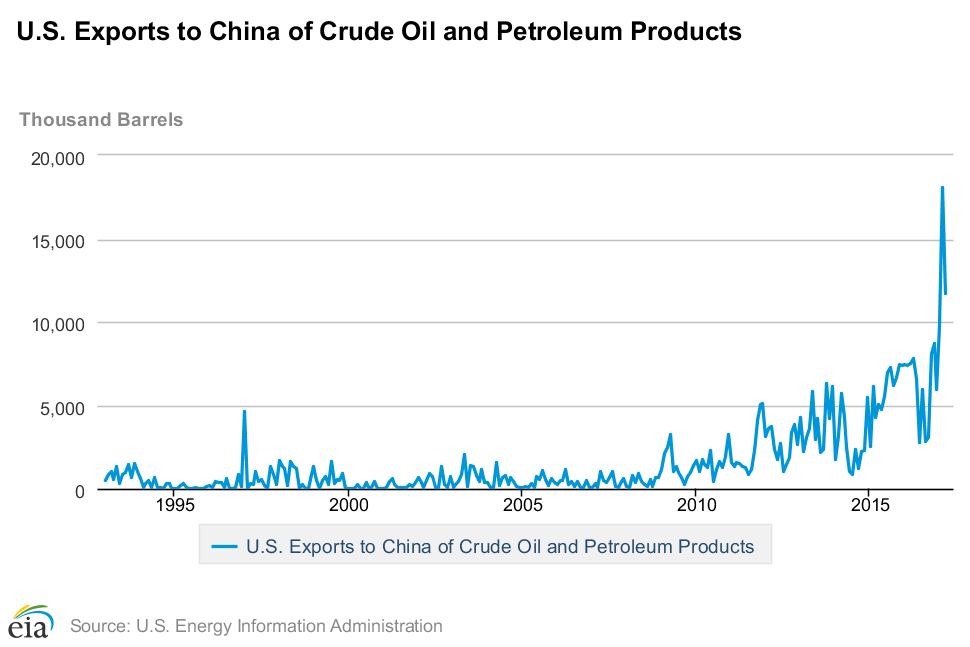 If you go back to the article we quoted at the beginning of this analysis, since it only discusses U.S. oil imports without any mention of U.S. oil exports, you might never know that that increased U.S. exports of oil to China accounted for 43% of the $1.2 billion year over year increase in the value of the U.S.' total exports to that nation for April 2017.

And that's the hidden story in U.S.-China trade. In becoming a major oil-exporting nation over the last year, the U.S. has the means to significantly shrink its trade deficit with China, thanks to that nation's growing appetite as the world's largest consumer of petroleum and other hydrocarbon products, where oil has the potential to replace soybeans as the U.S.' top export product to China.

That new trade can also provide a more direct indication of the relative health of China's economy, which we'll explore in greater detail in the future.