The U.S. government passed a unique milestone in May 2017, where it has now cumulatively borrowed more than $1 trillion from the public since President Obama was sworn into office in January 2009, just so it can loan the money back out to Americans who need to borrow money to go to college in the form of Federal Direct Student Loans. 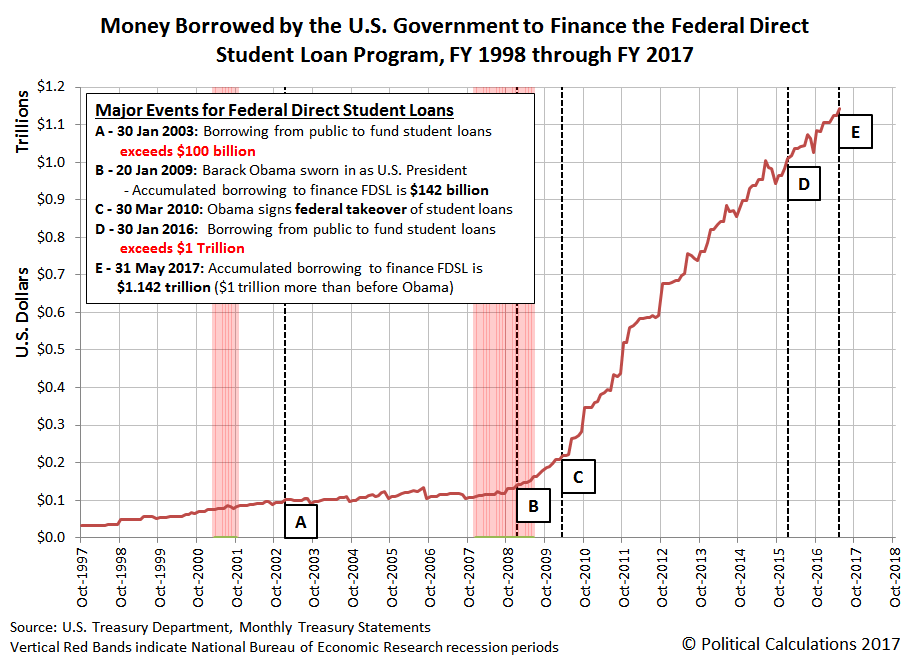 President Obama is directly responsible for this state of affairs. After being sworn into office on 20 January 2009, his first major domestic policy act was to sign the American Recovery and Reinvestment Act of 2009 into law on 17 February 2009 in an attempt to jump start a U.S. economy that had fallen into deep recession. Better known as the "Stimulus Bill", the act boosted the subsidy amount and quantity of Pell Grants paid to low and middle income-earning Americans attending college, but not by enough to cover more than one-third of the average annual cost of a university education, where American students who received these grants would then have to make up the difference through taking out student loans that are subsidized by the U.S. government.

Then, on 30 March 2010, President Obama signed the Health Care and Education Reconciliation Act of 2010, which resulted in the U.S. government taking over the student loan industry from the private sector.

President Barack Obama signed a law Tuesday that he said will end subsidies for banks that guarantee federal student loans, saving $68 billion over 11 years by making loans directly through the U.S. Department of Education.

The overhaul of the student loan industry is part of the Health Care and Education Reconciliation Act of 2010, which was passed by Congress to reform the nation's health care system.

According to the White House, starting July 1 all federal student loans will be direct loans administered through private companies that have performance-based contracts with the DOE.

At present, the law appears set to fail on delivering these promised savings to U.S. taxpayers. For that portion of the story, please scroll down and click through!...