Where have all the jobs for teens in America gone? That's a question that was just asked in Redondo Beach, California on 6 June 2017:

While it may have been a rite of passage for previous generations, but more and more teenagers are spurring summer jobs for more schooling, according to the Bureau of Labor Statistics.

Traditionally, July is the month with the highest teen employment participation rate because school is out of session, are many sports and extracurricular activities, but the number has been decreasing dramatically in recent years. In July 2016, for instance, the teen labor force participation rate was 43.2 percent, down almost 30 percentage points from the high point of 71.8 percent in July 1978 and 10 percentage points from a decade ago, according to the BLS.

While the report shows that close to half of teens are working during the summer, that number is significantly lower than previous generations. Several reasons have popped up to explain the decline in teen workforce participation, including more older workers working past retirement age to more low-skill immigrants taking jobs that would otherwise go to teens, to teens foregoing jobs because of the low pay.

We'll stop there because neither the California journalist reporting the story, nor the BLS analyst who wrote the report that the journalist is citing, ever mention the phrase "minimum wage", which is a very remarkable omission, particularly for the BLS.

Unfortunately, Bloomberg's reporting on the topic isn't much better:

Why aren't teens working? Lots of theories have been offered: They're being crowded out of the workforce by older Americans, now working past 65 at the highest rates in more than 50 years. Immigrants are competing with teens for jobs; a 2012 study found that less educated immigrants affected employment for U.S. native-born teenagers far more than for native-born adults. Parents are pushing kids to volunteer and sign up for extracurricular activities instead of working, to impress college admission counselors. College-bound teens aren't looking for work because the money doesn't go as far as it used to. "Teen earnings are low and pay little toward the costs of college," the BLS noted this year. The federal minimum wage is $7.25 an hour. Elite private universities charge tuition of more than $50,000.

Just as a quick aside, isn't that just a completely bizarre juxtaposition in those last two sentences? As if attending an "elite private university" was a common occurrence when in reality, over 70% of Americans in college are enrolled in much less costly public universities? What an elitist snob!

But at least they mentioned the minimum wage when discussing teen summer jobs, which puts them well ahead of both the Redondo Beach Patch and the Bureau of Labor Statistics in the February 2017 edition of its Monthly Labor Review.

Let's do a quick comparison between the job market that adults (Age 20 and older) see and the one that teenagers (Age 16-19) see. And better still, let's make it more local for the Redondo Beach journalists, where we'll just look at California's labor force and employment statistics for these demographic groups, which presents the data as rolling twelve month averages to control for annual seasonality in the data. Let's first look at the Age 20 and up group's employment situation in the state for the period from January 2004 through April 2017: 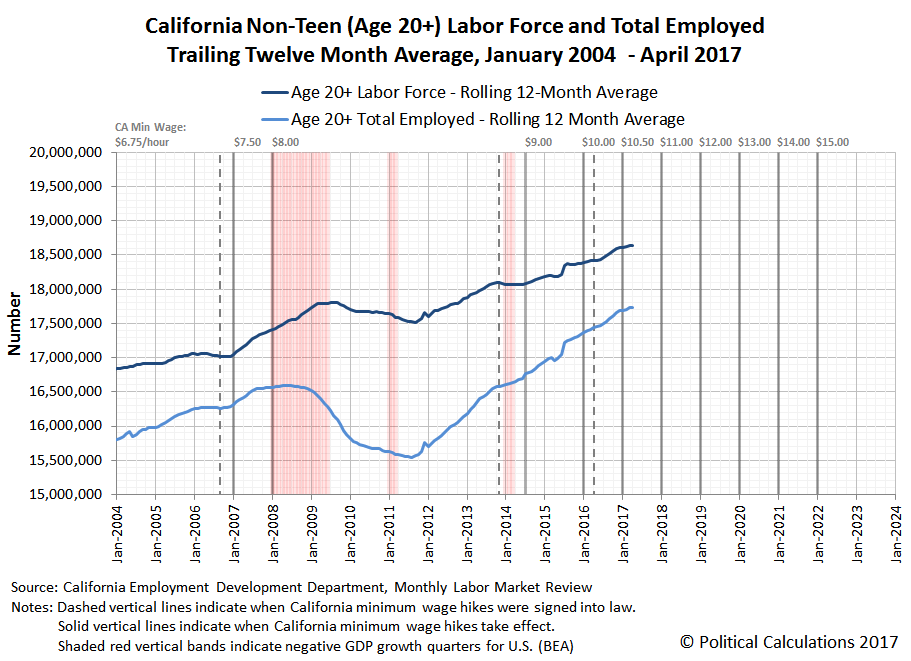 In this chart, we can see that California's adult labor force has been affected by things like recessions, but is pretty unaffected by minimum wage hikes. Next, let's focus in on just California's noninstitutionalized population of working age (16 to 19 years old) residents, whose total population in the state has largely ranged between 2.0 and 2.2 million from 2004 through the present: 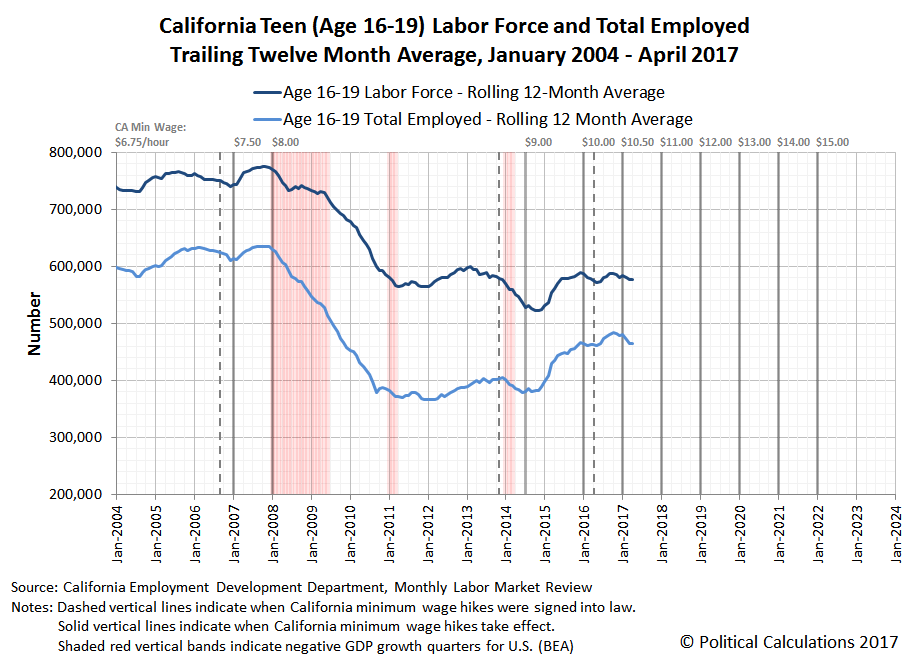 In this chart, we see that whenever minimum wage increase are approved or are implemented, adverse trends in teen employment levels follow. But then, that's what we should expect to happen whenever the cost of hiring the least educated, least skilled and least experienced portion of the U.S. workforce is arbitrarily increased by legislative whims.

It's the sort of thing that carries a social cost for the communities where teens live. Bloomberg's snobbish reporting on the topic was partially redeemed with the following observations:

All this studying has obvious benefits, but a single-minded focus on education has disadvantages, too. A summer job can help teenagers grow up as it expands their experience beyond school and home. Working teens learn how to manage money, deal with bosses, and get along with co-workers of all ages.

A summer job can even save lives. In a study released last month by the National Bureau of Economic Research, researchers analyzed the effects of two Chicago programs providing students with part-time jobs along with mentors for the summer. The programs had little apparent effect on the teens' later employment or education—a big concern in itself—but arrests for violent crime plunged, by 42 percent for one program and 33 percent for the other, an effect felt for at least a year after the programs ended. If teens got nothing else out of the jobs programs, the researchers suggested, they were at least "learning to better avoid or manage conflict."

Those kinds of real life lessons are all too lacking in far too many of today's schools and college campuses.