Over the last two weeks spanning the middle of 2017, the S&P 500 has mostly gone sideways even as its components have become more schizophrenic. The analysts at Deutsch Bank have an intriguing hypothesis about why that is (via ZeroHedge, we've added the highlighted links to the referenced figures):

Looking at the transition from "low-volatility, high-dividend shares to high-volatility, low-dividend shares", the German bank says that in recent months, shares with low volatility and high dividends are seen as alternatives to bond investment. Amid falling interest rates, risk-taking money had not been satisfied with investing only in defensive stocks as an alternative to bonds, but had also been investing in technology stocks.

Interest rates (investment yields) have trended back downward since 2H of last December, prompting greater risk-taking (see chart above), and "amid the slowdown in corporate earnings growth, the market focused on technology stocks like FAANG with robust fundamentals."

This is why tech shares offered the best return in the Jan-May period, something which as Bank of America showed yesterday has led to the best outperformance for the mutual fund industry since 2009. As shown in Figure 32, the volatility of excess returns in US technology stocks was around one-third that of defensive stocks. Technology shares had lower dividend yields than defensive stocks, but the difference was tiny, comparing with the scale of excess returns in line with price movements (Figure 32). We see that technology shares had the lowest risk and highest returns this year through May. The financial sector largely underperformed due to the low interest rate.

Inversely - and obviously - rising long-term rates have an adverse effect on excess liquidity, damaging the P/Es of US technology shares, which were in the front-line of risk-taking (Figure 31).

The FAANG stocks of Facebook (NASDAQ: FB), Apple (NASDAQ: AAPL), Amazon.com Inc. (NASDAQ: AMZN), Netflix Inc. (NASDAQ: NFLX) and Alphabet (formerly Google, NASDAQ: GOOGL) are those that had previously been driving the Nasdaq index (Index: IXIC) to record highs, which thanks to their large market caps and overlap with the S&P 500 (Index: INX), have provided momentum for that stock market index as well.

Until the last month, when the S&P 500's upward growth has largely stalled out as a result of the downward pressure provided by the FAANG stocks, which have offset positive factors that have boosted other stocks, particularly those of banks and other financial firms.

From our perspective, this dynamic is leading investors to shift their forward looking focus from 2017-Q4 toward the nearer term future of 2017-Q3, although we would estimate that they are still placing a heavier emphasis on 2017-Q4 in setting their expectations while making their investment decisions. 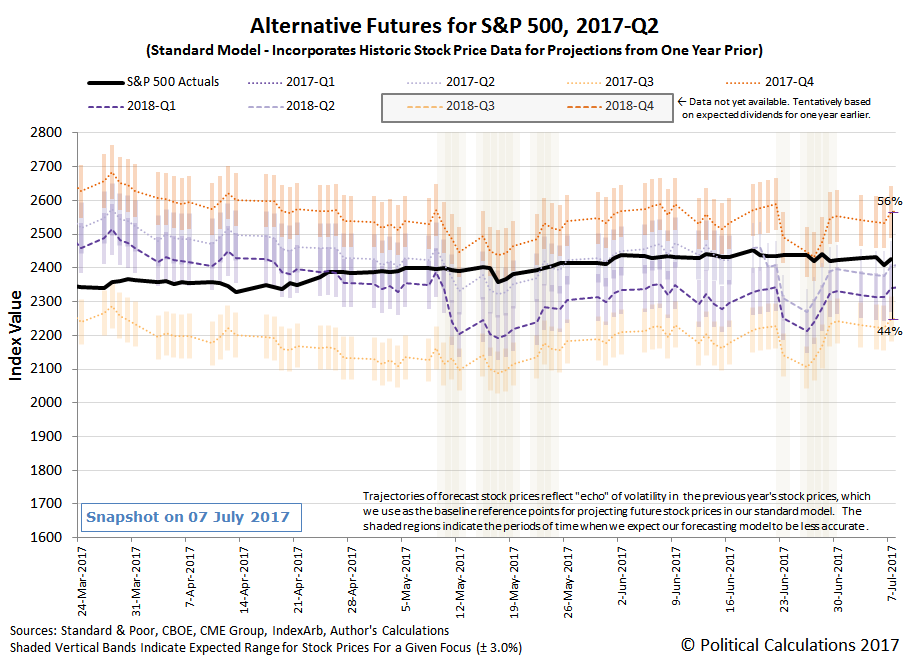 That dichotomy is reflected in the news headlines that caught our attention during Week 4 of June 2017, where you'll see a lot of major figures at the Fed trying to push investors to look at the nearer term future, while Week 1 of July 2017 saw something of a respite. There's more good stuff at the bottom of this post, and since they're here for our historic reference, we recommend scanning through them quickly and scrolling down to the bottom....

Meanwhile, Barry Ritholtz listed the economic pluses and minuses for both Week 4 of June 2017 and Week 1 of July 2017.

Finally, just because we're now in 2017-Q3, here's what the alternative futures for the S&P 500 look like for the quarter now underway. 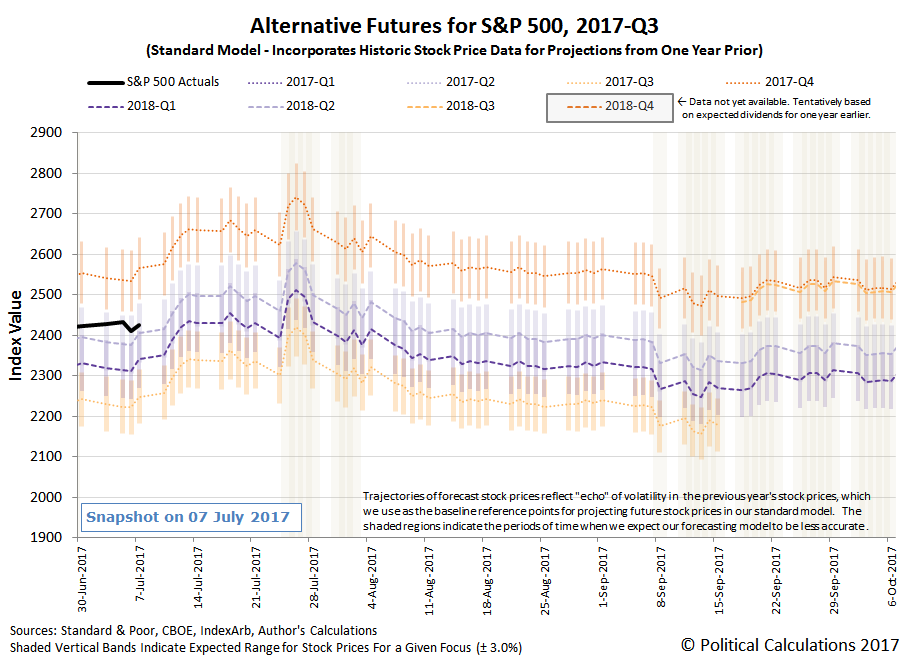 Remember that each indicated trajectory corresponds to investors focusing upon the indicated future quarters - when they split their attention, as we believe they are now with 2017-Q3 and 2017-Q4, the actual trajectory of the S&P 500 will fall in between the two quarters.

The alternative future trajectories shown will also change as the expectations for dividends to be paid out in each future quarter change. Other than that, since we use historic stock prices as the base reference points for projecting future stock prices, we also have to take account of the echoes of their past volatility, where we anticipate that our dividend futures-based forecasting model will overshoot actual stock prices during the last week of July, and will understate future stock prices in the second through fifth weeks of September 2017.