Political Calculations
Unexpectedly Intriguing!
July 17, 2017
The Fed Shifts the Future Focus for the S&P 500 in Week 2 of July 2017

In the second week of July 2017, Fed Chair Janet Yellen may very well have single-handedly reversed the momentum for short term interest rate hikes at the U.S. Federal Reserve.

Writing at Real Investment Advice, Lance Roberts had perhaps the best summary of what happened when the Fed's Yellen testified before the U.S. Congress on Tuesday, 11 July 2017:

As I noted in yesterday's missive, Yellen's recent testimony on Capitol Hill sent robots frantically chasing asset prices on Thursday even before testimony began. The catalyst was the release of prepared testimony which included this one single sentence:

"Because the neutral rate is currently quite low by historical standards, the federal funds rate would not have to rise all that much further to get to a neutral policy stance."

And on that statement, doves flew and algorithms kicked into to add risk exposure to portfolios. Why? Because she just said that rates will remain low forever. As my partner, Michael Lebowitz, noted yesterday:

"Per Janet Yellen’s comment, the 'neutral policy stance' is another way of saying that the Fed funds rate is appropriate or near appropriate given current and expected future economic conditions.

Two weeks ago, several fed officials were working hard to set the expectation that the Fed would hike its Federal Funds Rate again at its upcoming September 2017 meeting, in the current quarter of 2017-Q3, where investors were split between that quarter and 2017-Q4 as being the most likely timing for the Fed's next move to increase U.S. short term interest rates.

But after Yellen's congressional testimony, investors are betting that won't act to increase interest rates again until the first quarter of 2018 (2018-Q1), at the earliest.

We've been paying attention to CME Group's FedWatch Tool, which uses Fed Fund futures to anticipate the level that the Federal Funds Rate set by the Fed will be on the dates when the Fed meets. In the following chart, which we've animated, we'll scroll through what those futures indicate the probabilities for how the rate will be set after its upcoming September 2017, December 2017 and March 2018 meetings.

With the Federal Funds Rate currently set between 100 and 125 basis points (bps), the CME FedWatch tool is indicating that the market is betting that the Fed will hold its rate at that level through the end of 2017, where increasing it by a quarter percentage point only becomes the most probable outcome after its 21 March 2018 meeting, and even then, it gives only 45% odds of it doing so.

At least, as of when we took a snapshot of the data on 14 July 2017. There is a lot of time between then and now where a lot can happen.

Now, the cool part is that because the Fed influences how far forward in time investors are willing to look ahead, we can use the information provided by CME's FedWatch tool to identify just how far forward. And given what we've found out in the last week, it is very much in the ballpark of 2018-Q1, which would appear to match what our dividend futures-based model for forecasting the value of the S&P 500 suggests. 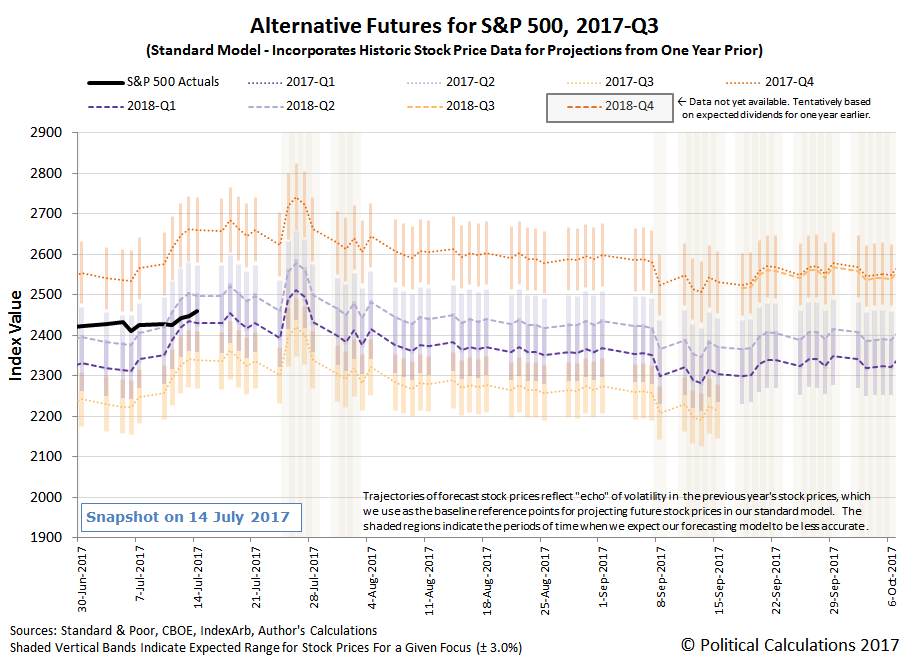 If that holds, unless 2017-Q3's earnings season is accompanied by significant dividend increases, we may be near the peak for the S&P 500 in the quarter.

Of course, it's possible that new information about business conditions in the U.S. or the efforts of more hawkish Fed officials might succeed in directing investors to refocus their attention on points of time in the nearer term future, which would affect stock prices correspondingly, but for now, we think that the Fed is unlikely to shift the market's attention on the future in the absence of compelling data for it to do so.

Meanwhile, the news headlines for Week 2 of July 2017 back up what the FedWatch tool indicates about the future focus of investors.

Elsewhere, Barry Ritholtz captured the pluses and minuses for the U.S. and global economy in Week 2 of July 2017.