There's a really exciting story developing in the international trade between the United States and China, two of the world's largest trading partners.

Here, the legalization of oil exports in 2016 from the United States has subsequently led to a rather dramatic surge in exports of petroleum products from the U.S. to China in 2017.

The upward trend seems to be picking up speed. In April and May, imports surged to more than 180,000 barrels per day on average.

In February, China became the biggest buyer of U.S. crude oil, surpassing Canada, at a time when OPEC was scaling back its output, according to Bloomberg.

China's own falling production, political uncertainty in the Middle East – on which China has long depended for fuel – and the cheaper price of US oil have contributed to the increase in imports.

According to the U.S. Census Bureau's data on international trade, China imported nearly $496 million of U.S. crude oil, refined oil and other petroleum derived products in May 2017, which was more than double the $214 million of these goods that it imported from the U.S. in May 2016. Altogether, these petroleum exports accounted for 5.2% of all the oil that the U.S. exported to all other countries during May 2017, and 4.9% of the value of all the goods and services that the U.S. exported to China during the month.

That's a pretty remarkable development when you consider that most of these petroleum product exports are loaded on container ships at growing U.S. port facilities in Texas and Louisiana, where it then must pass through the recently enlarged Panama Canal before transiting the Pacific Ocean to reach Chinese ports.

The chart below shows what those new U.S. exports are doing for the exchange rate-adjusted year-over-year growth rates of U.S.-China trade. 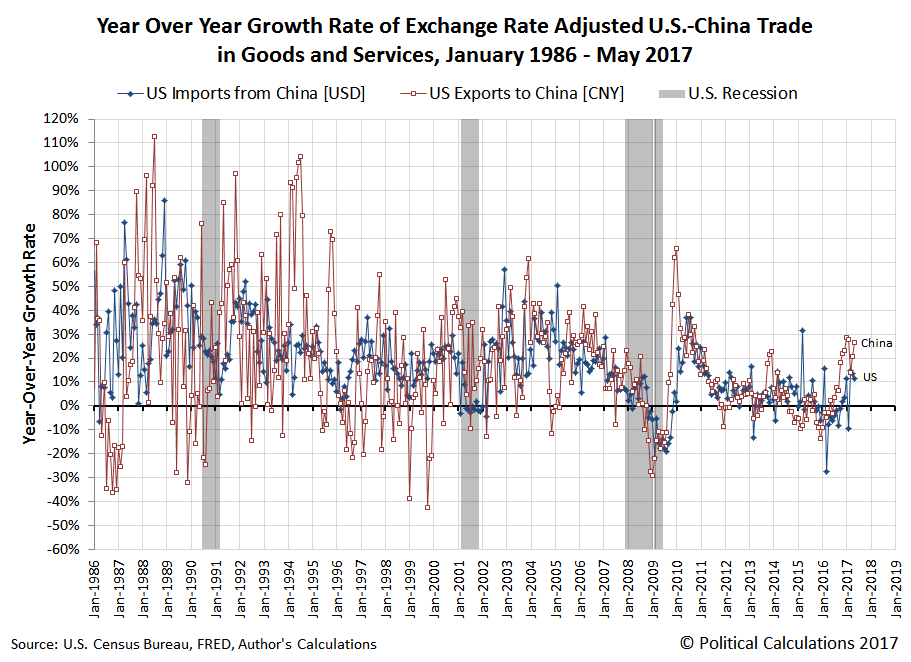 The downside to the U.S.' oil exports to China is that it's skewing the year over year growth rate of trade from the U.S. to China upward, which makes the growth rate data less directly useful as a measure of the relative health of the Chinese economy. That's especially true because China is largely substituting U.S. oil products for those produced by other countries, so its economy is not necessarily growing as much as U.S. export data might suggest.

We can however somewhat compensate for that effect by substituting the U.S. to China oil export data from 2016 for each month in 2017, where if we do that, we find that China's economy still appears to be growing fairly robustly in 2017, if at a slightly slower pace than indicated by the unadjusted growth rates shown in the previous chart. 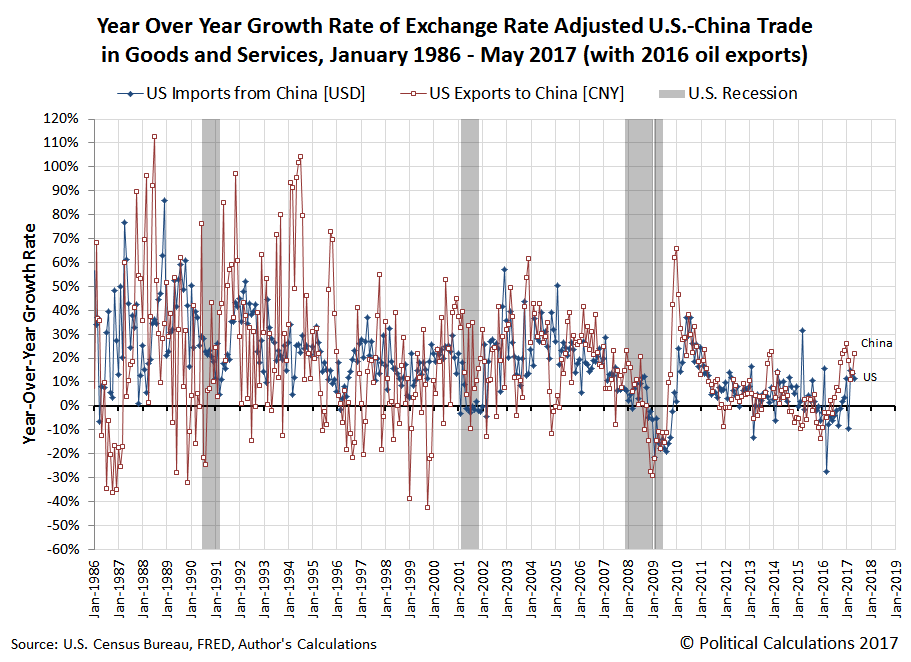 At the same time, the growth of U.S. imports from China suggests that the U.S. economy has likewise grown through the first five months of 2017.