The fourth week of August 2017 provided an almost textbook example of how stock prices behave when investor expectations are closely aligned with the signals being sent by the economy's major players.

Specifically, we're referring to what appears to be a very strong focus by investors on the distant future quarter of 2018-Q2 in setting the week's stock prices. In the latest update to our chart showing the alternate trajectories that the S&P 500 would be most likely to take when investors are focused on different points of time in the future, we find that the trajectory associated with 2018-Q2 most closely corresponds with the actual trajectory that the index took throughout Week 4 of August 2017. 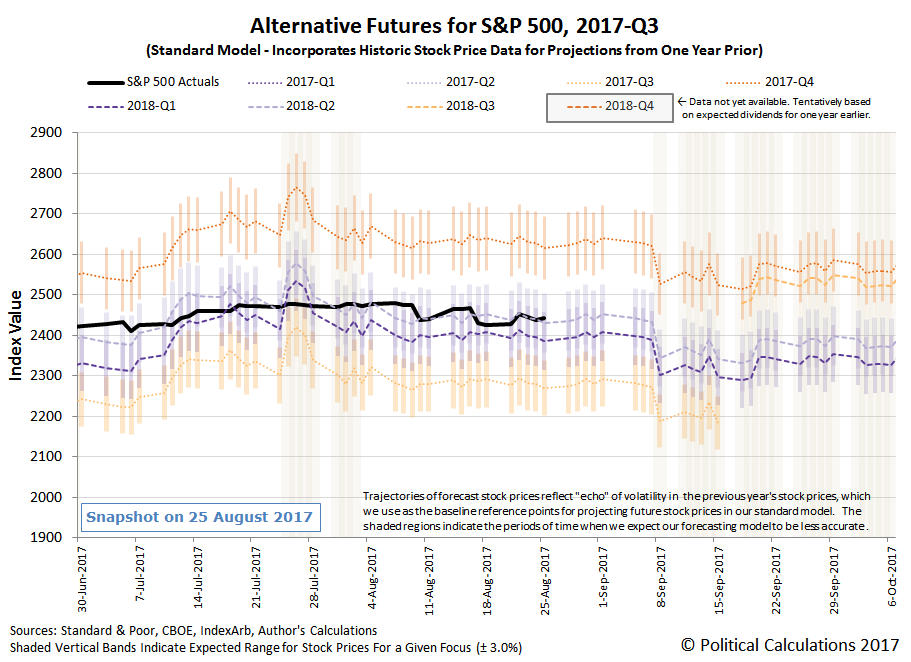 With the Federal Reserve's annual Jackson Hole vacation/meeting going on during this week, the statements being issued by Fed officials would draw close attention by investors looking for any potential changes for what to expect in the central bank's monetary policies in upcoming quarters, where the main messages coming out from the week is to expect no major changes until sometime in the first half of 2018, and most likely, in 2018-Q2.

That assessment is mirrored in the probability of changes in the Federal Funds Rate being announced at various points of time in the future, as given by the CME Group's FedWatch tool. The table below summarizes the snapshot of what those probabilities are as of the close of trading on Friday, 25 August 2017.

For additional context, the expectation that the Fed's next change in short term U.S. interest rates won't happen until 2018 is also strongly suggested in the week's market-moving news headlines.

At The Big Picture, Barry Ritholtz summarizes the positives and negatives for the U.S. economy and markets in Week 4 of August 2017.

As new information becomes available, investor expectations for the future will shift accordingly, and so will stock prices. It's the random part of the nature for how stock prices work.