Since the end of the first quarter of 2016, the trajectory of the S&P 500 with respect to its trailing year dividends per share has mostly behaved in an orderly manner. 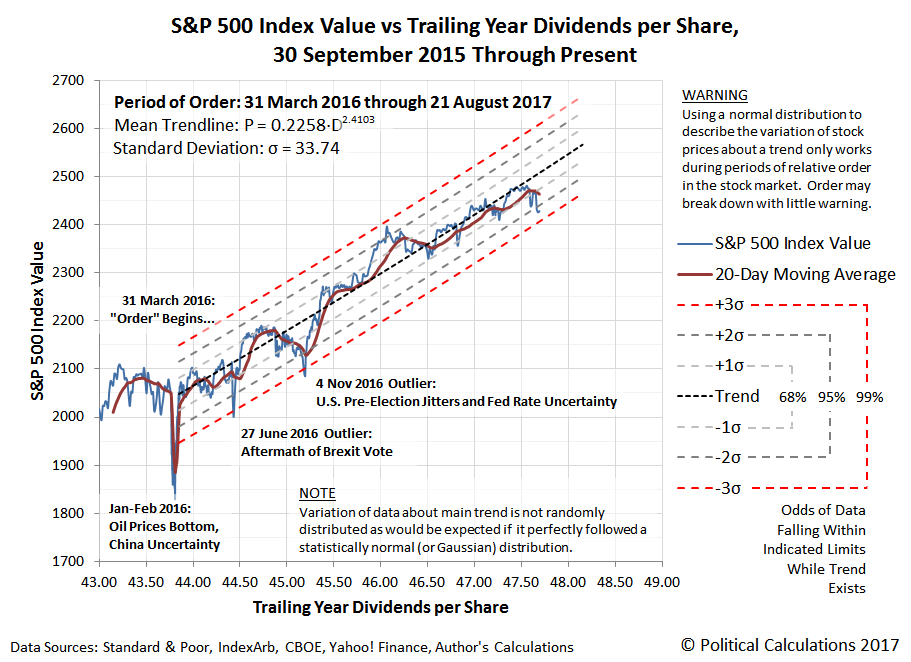 Since the current period of relative order began on 31 March 2016, we've had two episodes where we've seen statistical outliers in the data, which coincided with the 27 June 2016 outcome of the Brexit vote in the United Kingdom and the 4 November 2016 "pre-election jitters" that the market had when it was widely believed that Hillary Clinton would become the U.S. President.

Aside from those outlier episodes, the variation of stock prices about its mean trend curve with respect to trailing year dividends per share has largely followed a normal distribution, albeit with much less of a genuinely random walk than would be expected for such a relationship.

That relative order however now appears to be at risk of breaking down, where a downward move of 20 points, or rather, a drop of less than 1% of the current value of the S&P 500, would be all it would take for the current trend to either break down or register a new outlier episode.

Should order break down, it would mark a clear sell signal for investors, although one that would likely pale in comparison to the ultimate sell signal that this kind of analytical method would have generated if it had existed during the most significant event in U.S. stock market history.

On the other hand, if stock prices should only drop below the lower outer dashed red curve shown in the chart above for a short period of time, such a short decline could actually represent a buy signal for investors.

Which signal is being sent is something that investors would have to bet upon based upon their best guesses, where only the passage of time can definitively answer which scenario will be the one that plays out.

That does lead to some interesting questions. How would you as an investor place your bets to take advantage of this kind of information? Would you bet the house that such a move is only an outlier and that the trend will resume? And if reverting to the mean is not in the cards, how would you manage your investments to either maximize your returns or to minimize your losses to account for the potential of a sustained breakdown of order in the market?

Update 9:38 AM EDT: A partial answer, at least this morning, via Reuters... Wall Street opens higher on bargain hunting.