This will be our final report in the monthly series of median household income. We can no longer afford to provide these estimates given our current level of resources. We believe, as we hope you do, that these estimates provided an important new dimension regarding the economic situation of American households as we slowly climbed out of the Great Recession. The story continues but we must move on. Our hope is that someone will be able to continue this work. Should you or someone you know be interested please contact us.

Today, Political Calculations is ready to step in and fill the gap left behind by the original work of Sentier Research. We've developed an alternative method of estimating each month's median household income, which is based upon the monthly population and aggregate personal wage and salary income data reported by the U.S. Bureau of Economic Analysis. 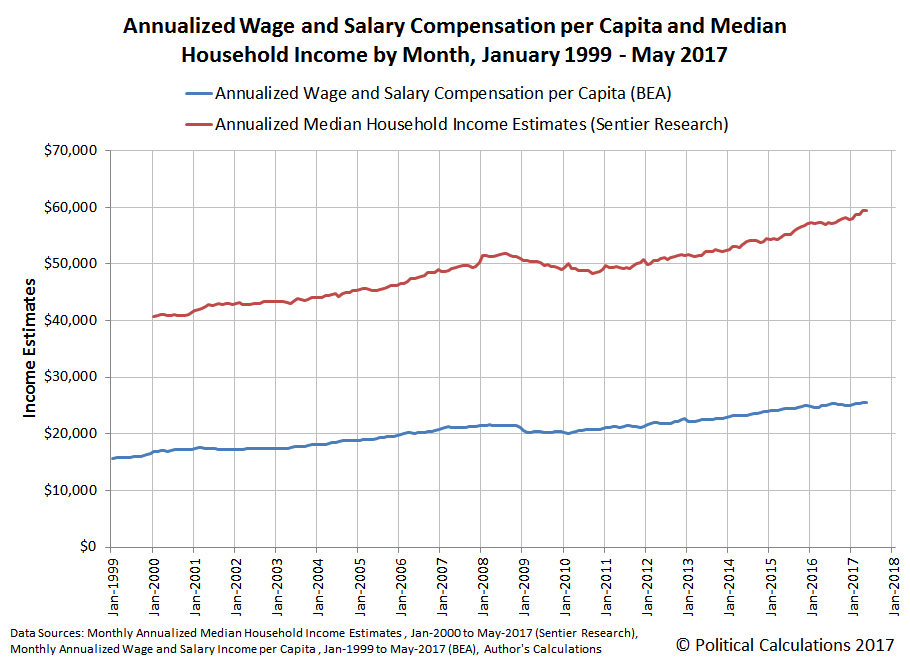 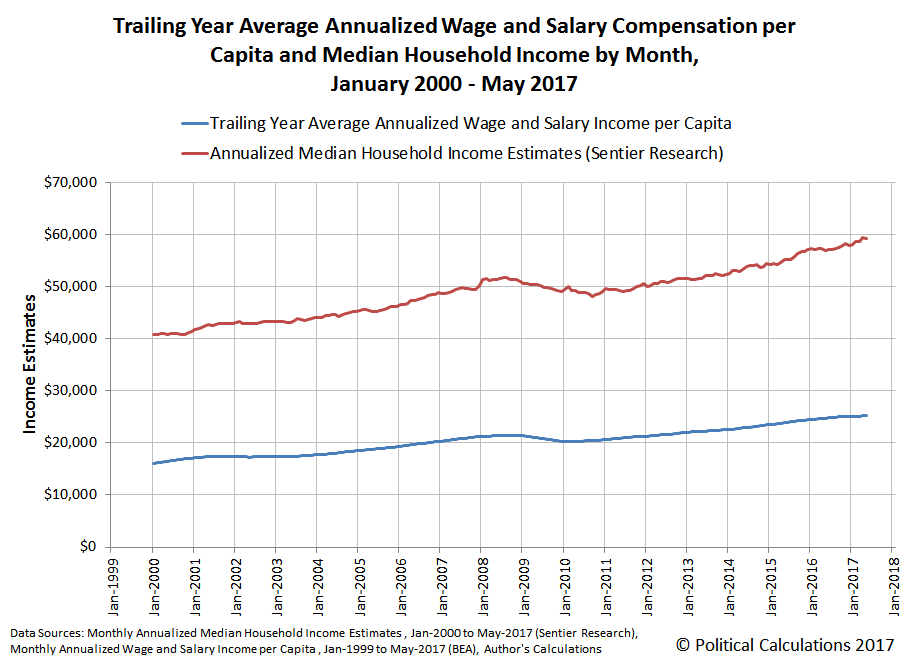 The next chart reveals the correlation that we discovered by plotting the Median Household Income data against the Trailing Year Average Wage and Salary per Capita. 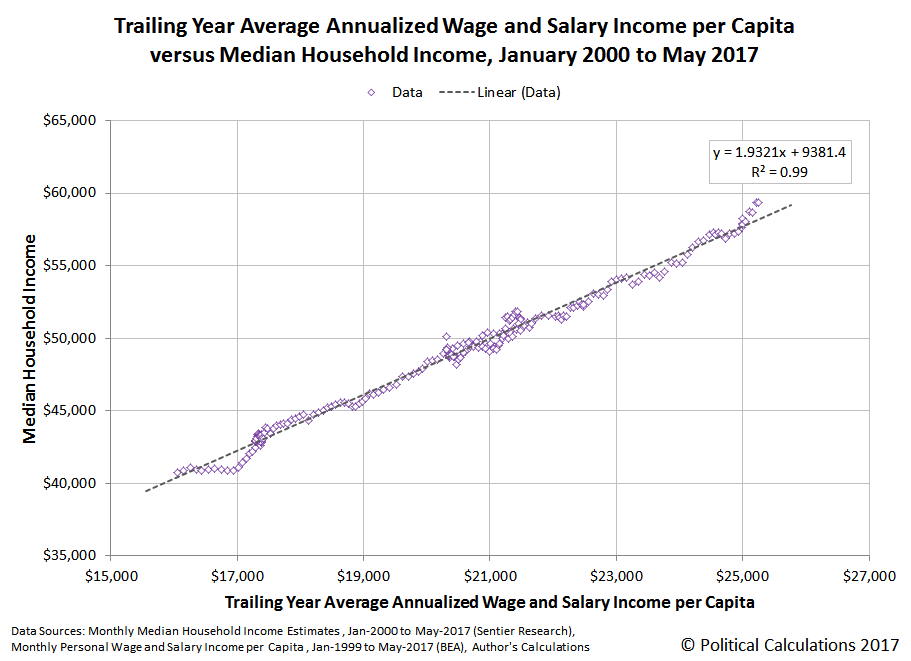 That large concentration of points that you see in the center of the linear trend is the rise and fall of incomes during the years leading up to, continuing through, and extending after the official period of the Great Recession, mainly between January 2006 and January 2011.

As linear regression analysis goes, what we see in the chart represents an outstanding result right out of the gate. So much so, that we've built a tool to do the indicated math. The default data in the following tool applies for June 2017 (if you're reading this article on a site that has republished our RSS news feed, please click through to our site to access a working version of the tool).

Our median household income estimate for June 2017 is $58,257. This figure is slightly higher than the estimate of $58,184 that our regression analysis indicates for May 2017. After accounting from month-over-month inflation, as measured by the Consumer Price Index, we find that there really hasn't been much of a significant change.

That May 2017 figure compares with Sentier's estimate for May 2017 of $59,345, which is about 2% higher than the value that we obtained with our method. Speaking of which, we found that 70% of Sentier's reported data for January 2000 through May 2017 falls within one standard deviation of our regression model trend, 96% is within two standard deviations, and all data points fall within three standard deviations. That pattern is consistent with the residual data following a standard normal, bell-curve type Gaussian distribution.

What that all means is that we can successfully estimate the Median Household Income figure that Sentier Research would have found using their methods with a relatively low margin of error, where our linear regression-derived estimate will almost always fall within 3% of the results of Sentier Research's median household income estimate, and within 1% just over two-thirds of the time. When you consider things like sampling errors and other statistical factors like compositional changes within U.S. households over time that would affect the accuracy of Sentier's income estimates, our results will very much be in the right ballpark.

If someone else picks up Sentier's mantle and methodology for generating monthly median household income estimates, we'll be happy to feature their work! Until then, we're happy to fill in the gap left behind by Sentier's exit from producing their median household income estimates, and in fact, because we've made a tool to do our math directly available to you, if the data is available, you don't even need to wait for us or anyone else to generate it. We just ask that you provide a link back to the original post or provide an appropriate citation when you write up your results so that others can take advantage of our tool.