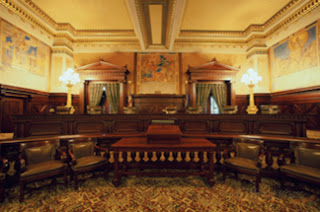 In Philadelphia, the city's controversial soda tax has reached the state of Pennsylvania's Supreme Court after being upheld in two lower state courts, but a new legal threat to the city's highly regressive tax may be gaining traction in an unlikely place: Chicago.

Like Philadelphia, the leaders of the city of Chicago have sought to impose a tax on the distribution of naturally and artificially-sweetened beverages within the city, regardless of their calorie content, which means that the tax applies to both regular and diet versions of sweetened beverages that are sold by local retailers, with the dedicated purpose of generating tax revenue for each city's coffers. While some soda tax supporters have claimed that imposing such a tax might produce public health benefits through reducing the consumption of calorie-laden sweetened beverages in favor of "healthier" drinks, and thus reducing the incidence of obesity-related conditions that are believed to be affected by soft drink consumption, the way that Philadelphia and Chicago have structured their sweetened beverage taxes to apply on the sales of both calorie-laden drinks and their closest low-and-no-calorie substitutes ensures that any such benefits will be minimal at best.

In addition, an early study has indicated that no statistically significant change in average individual caloric intake has been realized in Berkeley, the city that pioneered local soda taxes in the United States, which calls the claim of achievable health benefits through taxation into question, although additional studies will be needed to quantify what public health benefit, if any, might be realized from targeting taxes to this class of beverages and to determine if it in any way counteracts their additional economic negatives.

That discussion aside for now, Chicago's attempt to implement its soda tax has repeatedly run afoul of both Illinois' and federal law, for many of the same issues that have been raised in the challenge of the legality of Philadelphia's soda tax.

The rollout of a soda tax in Cook County, Illinois, has been a complete fiasco.

Much to the frustration of businesses and taxpayers in a county that includes Chicago, officials have repeatedly vacillated on applying the soda tax to purchases made with food stamps.

They haven't been able to decide how the tax will be administered or determine how much revenue the tax will generate....

County officials, however, had initially planned to tax distributors, who would pass along the cost in the final sale price of a sweetened beverage. Last Thursday they cancelled that plan when the Cook County Revenue Department pointed out the sales price would still be subject to a sales tax.

A tax on a tax is illegal in Illinois.

Philadelphia Court of Commons Pleas Judge Gary S. Glazer dismissed a lawsuit the American Beverage Association and local retailers and distributors filed against the City of Philadelphia Monday. The soda tax levies a 1.5 cent per ounce tax on distributors of sodas, diet sodas, juices and other sugar-sweetened beverages and is being used to fund pre-K programs, the renovation of recreation centers and to fill in holes in the city's budget....

The ABA and others argued the tax was unconstitutional mostly for two reasons. First that it violated the state's uniformity clause by favoring distributors that sell high-priced lower-volume beverages (a $5 Starbucks drink) will owe less than those who sell low-priced higher-volume beverages (a two-liter bottle of soda). Glazer compared the soda tax to taxes on alcohol and fuel, which can also lead to an unequal tax burden depending on how much they are sold for.

A second argument stated Pennsylvania already taxed soft drinks 6 percent as part of a different tax and that this tax would illegally duplicate the state tax. Glazer wrote Philly's soda tax was not duplicative of the Pennsylvania Beverage Tax because Philly's tax is levied on the distributor and that it was irrelevant that the tax would likely get passed on to consumers, therefore taxing the same subjects — those who purchase beverages — as the state tax.

An argument that SNAP benefits would be used to pay a sales tax was also thrown out by Glazer for the same reason: because the tax is collected on distributors.

The difference in legal outcomes for these cases may be attributed to whether the courts are willing to recognize the economic concept of tax incidence, which recognizes the difference between who is required by legal statute to pay a tax and who is really bearing the cost of paying the tax, where the actual economic burden of paying the tax is shifted in full or in part from one party to another.

What you can see in the Philadelphia court's decision is the deliberate dismissal of the concept of tax incidence, where the legality of its soda tax depends almost entirely upon the arbitrary disregard of that real world factor.

That's not the case in Chicago, where authorities have confirmed that taxing the distributors of sweetened beverages results in part or all of the tax being passed through to retail customers through the prices they pay, which is then subject to sales taxes, rendering that approach to taxing sweetened beverages to be illegal under that state's constitutional prohibition against imposing taxes on taxes.

The difference extends also to the way that recipients of SNAP (food stamp) benefits are now being subjected to Chicago's soda tax, where the city's attempted workaround to impose the tax without being duplicative appears to be in violation of federal policy.

The U.S. Dept. of Agriculture has warned Illinois government if Cook County continues to collect sweetened beverage taxes from food stamp recipients, it could lose millions in funding.

USDA is taking a hard line when assessing what constitutes a violation.

Say you're a SNAP client, you buy a soda, you are charged the tax but you get an immediate refund. You may think no harm, no foul, but Illinois Retail Merchants Association Vice President and General Counsel Tanya Triche Dawood disagrees.

The rule in question forbids food stamp clients from being charged any form of tax on the sweetened beverages. The county has offered merchants the immediate refund as a workaround, but Dawood said the prohibition is absolute and not curable by an immediate refund.

The federal rules for exempting SNAP benefits from state and local taxes applies to all goods eligible to be purchased using the charitable welfare benefits provided by the U.S. government. It does not just apply to sweetened beverages.

Where the situation with Chicago's soda tax creates legal jeopardy for Philadelphia's legal tax lies in the almost opposite ways in which public officials and judges in each jurisdiction are assessing the legality of the tax, which would appear to be a direct outcome of one jurisdiction's arbitrary dismissal of the economic concept of tax incidence and the other jurisdiction's acceptance of its legal applicability. While Pennsylvania's seven Supreme Court judges have yet to weigh in on Philadelphia's soda tax at this writing, should they allow the tax to continue, the wildly different judicial assessments and implementation of similar taxes and provision of welfare benefits in different states will likely result in the legality of state and local soda taxes being decided in federal courts.

The ball, as they say, is now in the hands of Pennsylvania's Supreme Court.