There really isn't anything much more boring than insurance, except perhaps discussions about insurance. 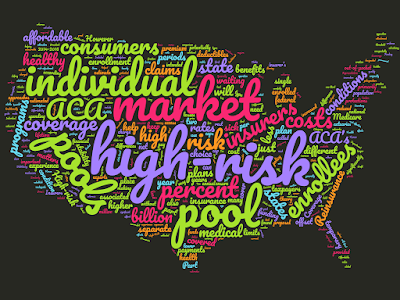 So that's why we're going to go meta and crank the knob of boringness all the way to 11 and discuss insurance for insurers, which is better known as reinsurance!

Reinsurance is a tool that insurance companies use to cover the cost of big payouts to their customers if they should experience an unexpectedly large number of claims or perhaps just some very large claims. Or both, as can often occur with a large scale natural disaster, such as a hurricane or an earthquake, where they can use their reinsurance policy to come up with the large sums of money that they need to pay out on short notice to make their customers whole.

It's a deadly dull business, but it's also a big business - and in the case of one of America's biggest billionaires, their main business.

We're thinking about reinsurance today because of the growing death spiral dynamic in Obamacare, where the original defects written into the law are contributing to adverse selection, where rising premiums are driving healthy Americans out of the market while the people who actually buy the Affordable Care Act's subsidized health insurance are the ones who need and use it more because they're sicker.

That dynamic is leading health insurers to adopt strategies that either boost their premiums to cover the cost of their sicker-than-average population of customers or to develop low quality health insurance coverage that is specifically designed to be undesirable to such customers as a way to screen them out in the market.

Part of the dilemma here is that the Affordable Care Act requires health insurers to sell health insurance to everyone, regardless of whether they have any costly pre-existing conditions, and then limits how much they can charge. That combination, combined with the death spiral dynamic, is a major reason why health insurers are increasingly leaving the Affordable Care Act's exchanges, where the cost of doing business is often greater than their revenue from the business.

This is where the concept of reinsurance might provide a solution to the problem of costly customer pools for health insurers. What if every customer was initially covered by health insurance policies as if they had no pre-existing condition, but which would make full payouts to the patient so that they could cover the actuarial lifetime cost of having a condition after being diagnosed? Including if they had costly and chronic conditions, which could involve big payouts for the insurers.

The kind of payouts that would be provided through reinsurance policies taken out by the health insurers themselves. Because the money is paid out to the policy holding customer, say into their Health Savings Account, both they and the health insurer would effectively never have to bother with their having a pre-existing condition again, because it has already been accounted for. The same would be true if they were to change health insurers, where the new health insurer could afford to disregard the costs of their pre-existing condition because the customer's previous insurer had already covered it.

It certainly would be better than the situation we have today, where Obamacare premiums and costs to U.S. taxpayers can only rise because of the Affordable Care Act's inherent death spiral problem. We would expect it to be a major part of any legislation that might be introduced to repair Obamacare's multitude of defects.