The fourth week of October 2017 retold much of the same story for the S&P 500 that every other week of the month has seen, with the index closing the week near or, as was the case this week, at a new record high value.

From our perspective, that mainly means that stock prices continued to track along the upper end of the range we first forecast back in early September, when we assumed that investors would be most likely to focus upon the distant future quarter of 2018-Q2 in setting current day stock prices. 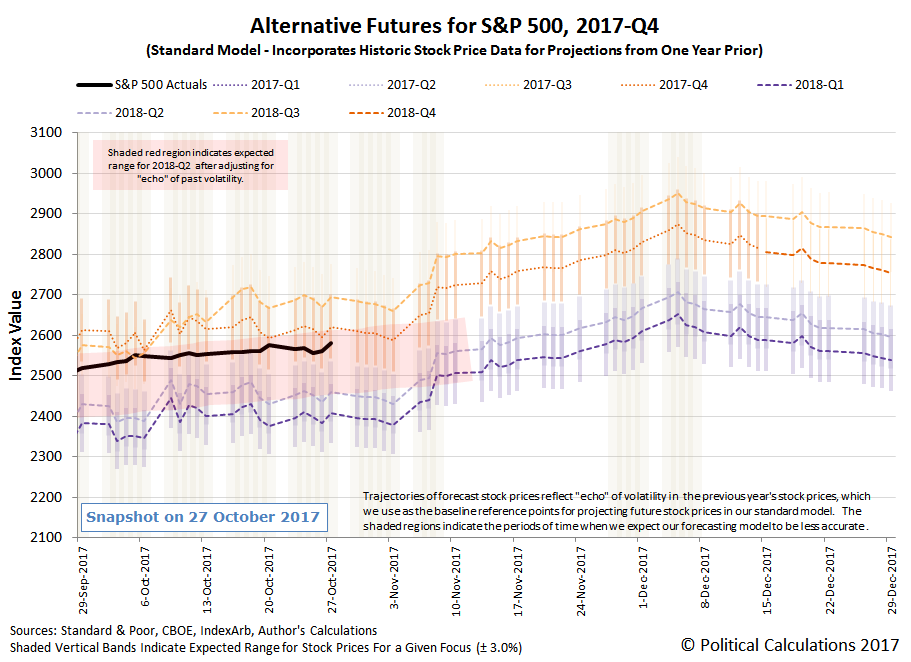 Since that time, investors have maintained that focus rather steadily, which is somewhat remarkable, since the fourth quarter is often when companies will significantly update their business outlooks as they report their most recent earnings in the first half of the quarter, where their shareholders can make changes in their investing strategies before the end of the calendar year. For our dividend futures-based model of how stock prices work, that dynamic can cause both fundamental expectations about the future to change as well as change how far forward in time investors are focusing their attention.

The lack of surprising new information being announced since the beginning of the month has allowed stock prices to follow a fairly stable trajectory, which we generated to account for the past volatility of the historic stock prices that we use in our model as the base reference points for projecting future stock prices. Our need to make that adjustment to improve the accuracy of our model's projections will end in a week and a half.

As we noted earlier, the S&P 500 is continuing tracking along near the upper end of that forecast range, which tells us that while investors are mostly focused on the expecations associated with 2018-Q2 in setting today's stock prices, they are devoting a small portion of their attention to another quarter. In this case, we believe that lesser focus is being placed upon the current calendar quarter of 2017-Q4, which we're still less than a third of the way through.

That's not an accident. Both 2017-Q4 and 2018-Q2 currently share one common feature that would prompt investors to focus upon each quarter above and beyond simply focusing on new information being announced about the future outlook for individual U.S. companies: these quarters are both expected to feature the U.S. Federal Reserve announcing changes in short term interest rates, where the Fed is currently expected to increase its Federal Funds Rate by quarter percent before the end of each quarter, where the Federal Funds Rate would rise from its current range of 100-125 basis points to 125-150 bps at the end of 2017-Q4, then rising to 150-175 basis points by the end of 2018-Q2.

You wouldn't necessarily have picked up on that latter influence upon investors from the more notable headlines in the past week.

Over at The Big Picture, Barry Ritholtz lists the week's major positives and negatives for the U.S. economy and markets.