Every October, many stock market investors celebrate their own pre-Halloween scare tradition, thanks to a calendar-based phenomenon called the "October Effect", which is "the theory that stocks tend to decline during the month of October."

As Investopedia goes on to describe it, "the October effect is considered mainly to be a psychological expectation rather than an actual phenomenon. Most statistics go against the theory." And indeed, that's true. Examining the month's track record over the years, one finds that truly scary market events like the Black Monday Crash of 1987, which celebrated its 30th anniversary this week, are often balanced against the month's coincidental timing in marking the beginning of long term rallies.

Still, we can still offer some insight into why both those phenomenons exist in the month of October. It is because the second week of the month marks the beginning of the year's fourth quarter's earnings season, which is the time that publicly-traded U.S. firms will announce if they are doing better or worse than expected for the year, where company leaders will also communicate changes in their expectations of how their businesses will perform in the next year.

ZeroHedge is reporting an example of the negative side of this dynamic play out on this Friday, 20 October 2017, with General Electric (NYSE: GE), which for GE investors, looks like a Black Friday-type event.

While it may not have slashed its dividend, yet, General Electric shares plunged 5% in the pre-market after the company cut its 2017 profit forecast while its new CEO grapples with one of the deepest slumps in the iconic US manufacturer's history. The company reported that adjusted earnings this year are expected to be only $1.05 to $1.10 per share, down over 30% from a previous range of $1.60 to $1.70 a share. This is also sharply lower than the sellside consensus of $1.54 a share. 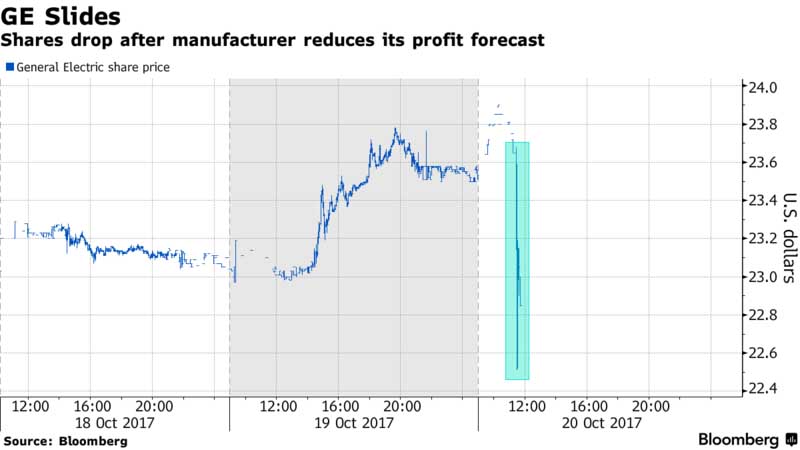 For the current quarter, the industrial conglomerate and maker of jet engines and gas turbines reported adjusted Q3 EPS of 29 cents, nearly 50% below the 50 cent consensus estimate.

As Bloomberg reports, the revision underscores the severity of the challenges facing Chief Executive Officer John Flannery, who took over Jeffrey Immelt's longtime post in August. With hurdles from poor cash flows to slumping power-generation markets, GE is by far the biggest loser on the Dow Jones Industrial Average this year and has seen a quarter of its market value evaporate.

The cut is the latest step in what is shaping up to be a dramatic repositioning of GE under its new leadership. Flannery this month welcomed a representative of activist investor Trian Fund Management to GE's board and announced several management changes. He is seeking deep cost cuts and has said he will consider all options, including portfolio changes.

In addition to GE no longer using a "shadow" private jet for its CEO, not to mention slashing its fleets of private cars and other corporate perks as the WSJ infamously reported yesterday, expect thousands more in layoffs from what was once America's most iconic company, which in turn will follow to more complaints by the Fed about America's growing "qualified labor shortage." And now we wait news on the fate of the company's dividend which wall street expects to be "massively" cut.

Now, balance that bad news against the week's example from the positive side of the future expectations adjustment ledger, where Netflix (NASDAQ: NFLX) reported much higher than expected earnings and more importantly, a higher level of subscriptions, which portends a brighter earnings future for the streaming media delivery company going into 2018.

It's that kind of stuff that makes October an exciting month for investors. Whether its a scary month or the beginning of a new market rally all hinges on how expectations for 2018 will be collectively set by all the publicly-traded companies who will announce any changes in their outlooks during this earnings season.