Philadelphia's controversial 1.5 cents-per-ounce soda tax was supposed to bring in $92.4 million per year to the city's coffers. Through its first 11 months of collections, the city has collected just $72.3 million, leaving city officials over $20 million short of their goal. 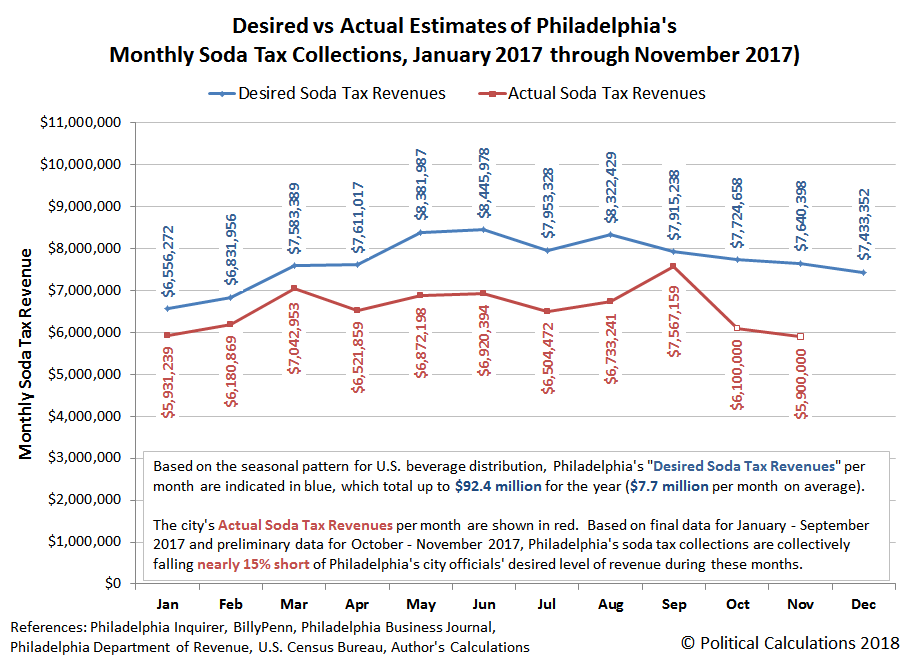 But not to worry, because Philadelphia's mayor's office sees no need to discuss scaling back either their revenue projections or their plans for spending the revenue that they desired to collect from the Philadelphia Beverage Tax (PBT).

Despite the likely shortfall, Mike Dunn, a spokesman for the Kenney Administration, said the $92 million yearly projection will remain. When asked if the dollars meant Philadelphia residents should expect a curtailing of the programs funded by the PBT, he said, "We’re not going to speculate."

Those comments echo similar ones that Dunn made back in May 2017.


"We're experiencing the growing pains of a new tax. We still expect to reach our projections in the long term," Dunn said.

Perhaps with the assistance of lots of inflation or if "in the long term" really means "after many years". Still, to be fair, what kind of growing pains could there be?

Robert Inman, Wharton's Mellon professor of finance and public policy at the University of Pennsylvania, called Dunn's assessment appropriate – especially given the lack of historical data for PBT and other similar policies.

"If they are within 85 to 90 percent of their projections," Inman said, "that's pretty good." Changes in weather, among other variables, could also influence collections since some consumers may buy more of the impacted beverages in the summer months.

Explaining there will be a lot of "uncertainty" and "randomness" with such estimations when there is little to no previous information to work from, Inman said, "They just don't have the history with this."

In our chart above, we've taken the basic seasonality that beverage makers typically see throughout a year to indicate how much revenue that Philadelphia could reasonably have expected to collect from its beverage tax each month in order to reach their annual $92.4 million projection. There have really only been two months that haven't at least somewhat followed that pattern so far - April 2017, where the gap between "desired" and "actual" collections really began to open up, and September 2017, where we suspect an unusual number of beverage distributors made late tax payments to the city.

Through its first eleven months, the city's cumulative soda tax collections of $72.3 million are falling nearly 15% below their desired revenue of $85 million that would apply over that period of time. If the bar for evaluating the success of Philadelphia's Beverage Tax is lowered to $78.54 million for the full year (85% of the city's annual $92.4 million revenue projection based on Professor Inman's generous grading curve), Philadelphia will need to collect nearly $6.3 million in December for the tax to be considered a success by those reduced standards.

Based on the seasonal pattern, where December's tax collections would reasonably be expected to come in at a lower level than those for November, that may be pretty unlikely with the preliminary estimate for November having been reported to be $5.9 million. Since Philadelphia's soda tax payments are due in the month following when they are assessed, we should find out later this month just how far short the city was from both its unchanging annual target revenue figure or even the reduced standard of 85% of that level in collecting revenue from the sweetened drink tax during its first year in effect.