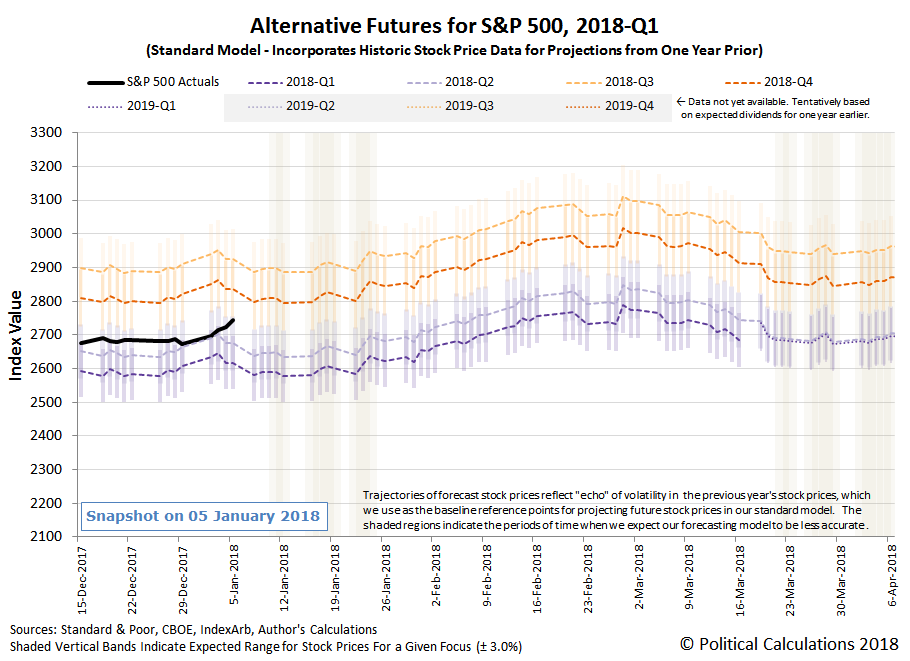 Which is to say that sort of large magnitude upward change in the S&P 500 doesn't happen very often. More often than not, stock prices tend to move by much smaller amounts over such short periods of time, where even a large, sustained 657.97 point (31.6%) rally of the kind we've seen since 8 November 2016 doesn't produce the kind of sudden upward shifts that we're seeing now.

In math, this kind movement is called a Lévy flight, which is similar to a random walk, but with one big difference. Instead of having the sizes of all the movements be relatively small and similar in size to one another, the size of some of the movements are disproportionately large compared to most of the others. More so than would be predicted by a normal distribution.

When that happens with stock market, what you're really seeing is one of the quantum-like properties of how stock prices work, where we see these kinds of outsized movements whenever investors are shifting their attention from one point of time in the future to another, where the difference in expectations for dividends associated with the different points of time is large enough to produce outsize movements, which we've previously described as a "quantum random walks" (if you only have time to follow only one link in this article, click this one!)

They're pretty cool when they happen, and as it turns out for this week, timely, because the science of economics is believed by some to be long overdue for a quantum revolution, where perhaps seeing a quantum event like this might motivate some forward movement within the field.

We're coming up on a relatively short period where the accuracy of our standard dividend futures-based forecast model for the S&P 500 would be reduced because of the echo effect from the past volatility of stock prices, which arises because the use of historic stock prices in making its projections. Although we've had some success in adapting a simple technique to get around that limitation, we're going to skip making a red-zone forecast to cover this period for the following reasons:

And of course, that's all assuming that investors don't have reason to shift their attention to some other point of time in the future, which would be driven by learning new information and changes in future expectations. Speaking of which, here are some of the more significant news headlines that we believe would have strongly influenced investor expectations of the future during Week 1 of January 2018.

Elsewhere, Barry Ritholtz took note of the positives and negatives for the U.S. economy and markets in the first week of January 2018.