Political Calculations
Unexpectedly Intriguing!
05 February 2018
A New Lévy Flight for the S&P 500 in Week 5 of January 2018

The first time kicked off as soon as the stock markets opened in 2018, which lasted to the third week of the month, as investors shifted their forward looking attention from 2018-Q2 to the more distant future of 2018-Q4 in response to the stimulus of tax cuts being implemented in 2018.

But in the final week of January 2018, and really, mostly on Friday, 2 February 2018 (since more days of the week belong to January, we consider it to be Week 5 of that month), investors appear to be finding reason to return their forward-looking attention back to the nearer term future defined by the expectations associated with 2018-Q2. The result is another comparatively large movement in stock prices over a comparatively short period of time, but this time, with stock prices moving in a downward trajectory. 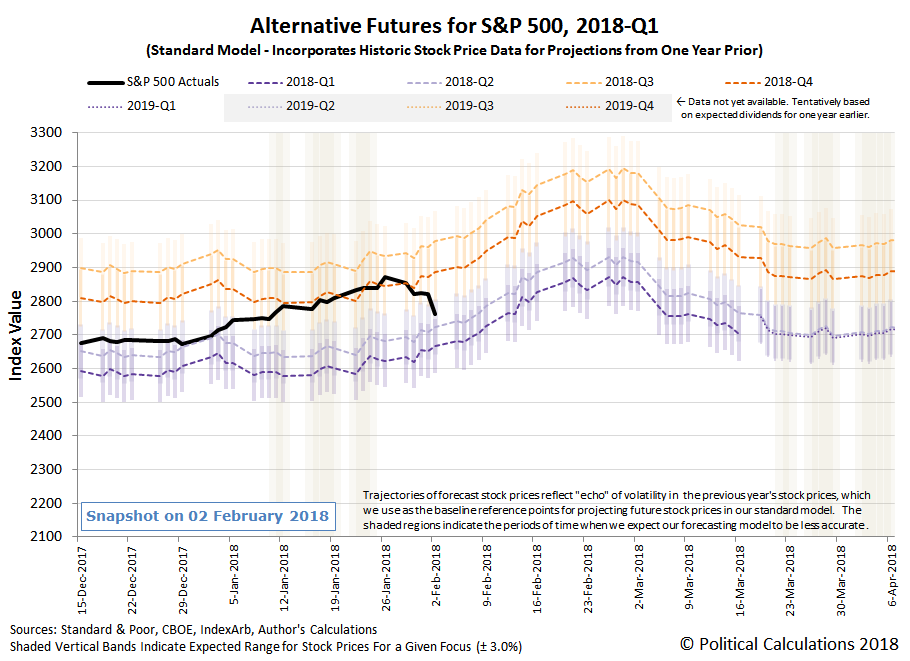 This isn't the first time that we've seen successive Lévy flights occur within a relatively short period of time. For us, the classic, almost textbook example occurred in late August 2015, where stock prices suddenly plunged by 10% in the third week of that month as investors shifted their forward-looking attention from 2015-Q3 to 2016-Q1, before rebounding by over 6% in the following week when investors shifted their focus back to 2015-Q3. In the two months after that, there was another Lévy flight crash and rally that both played out over a slightly longer period of time before volatility in the market settled down.

It's definitely not the kind of normal random walk that Louis Bachelier or Paul Samuelson theorized, although they were close to being on the right track. It's much better thought of as a quantum random walk, where the number of large, sudden changes in stock prices are greater than would be predicted by Gaussian statistics, and if it seems like the market is behaving chaotically, that is because it is.

As for what prompted the sudden shift in how far forward investors were looking in Week 5 of January 2018, here were the week's market moving headlines:

Elsewhere, Barry Ritholtz identified the positives and negatives for the U.S. economy and markets that he saw in the fifth and final week of January 2018, where he found more pluses than minuses.

Finally, because factors that influence how far forward in time investors are looking are very much tied to the prospective actions that the Fed might take with respect to its monetary policies, and particularly the pace at which it might change short term interest rates in the U.S., here are the odds that investors are giving for the Fed hiking interest rates at selected upcoming dates in 2018:

The other Fed-related factor to pay attention to in 2018 is its plans for drawing down its holdings of U.S. Treasuries and government-issued securities, which would tend to increase yields across the entire Treasury yield curve, which as we saw in Week 5 of January 2018, can have an impact on stock prices.