Political Calculations
Unexpectedly Intriguing!
February 20, 2018
A Subdued Rebound for the S&P 500 in Week 2 of February 2018 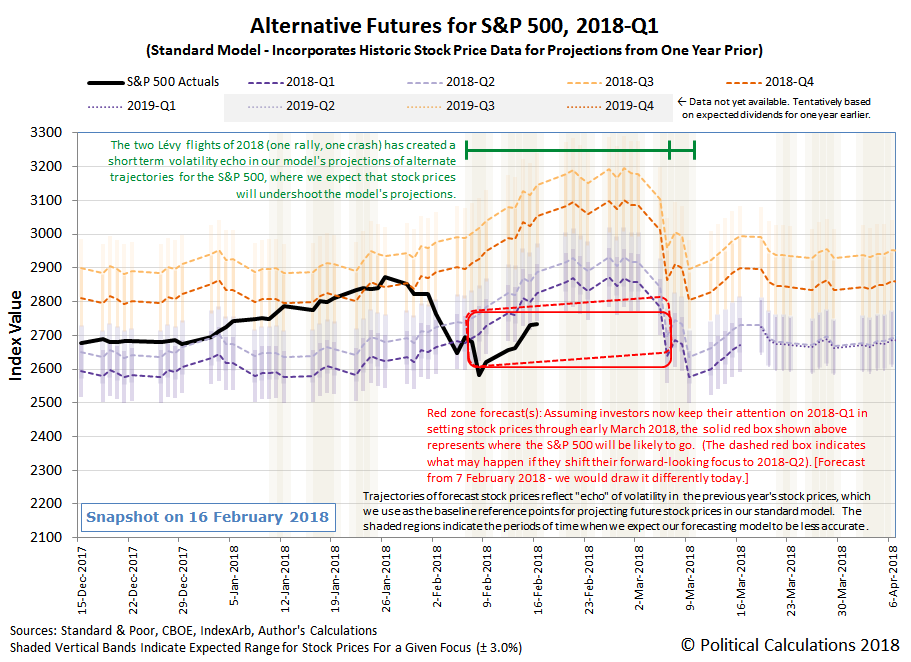 The subdued rebound for the S&P 500 was all the more remarkable because it occurred in an news environment where a resurgence in consumer inflation became more of a concern for markets, to the point where speculation began to rise that the Fed might hike short term interest rates in the U.S. four times in 2018.

Checking in with the CME Group's Fedwatch tool, we find that investors are still only betting on three rate hikes occurring during 2018, near the end of the current quarter of 2018-Q1, and the more distant future quarters of 2018-Q2 and 2018-Q4, where the probabilities reported by the tool indicate a greater-than-50% chance that the Federal Funds Rate will be increased by a quarter point (or more) at these specific points of time in the future.

The headline of the week was the drastic reduction in the kind of volatility that characterized the previous two weeks for the S&P 500. So much so that if we were to redraw our "connect-the-dots" manual forecasts of the potential trajectory of stock prices in our alternative trajectories chart above, we would choose a projected point for the alternative trajectories of 2018-Q1 and 2018-Q2 in the second week of March 2018, which would fall outside of the short term volatility echo in our model's projections, where they would extend slightly longer and instead of being flat-to-slowly rising, they would indicate slowing declining-to-flat.

Still, all the other assumptions behind our red-zone forecast appear to be holding at this time, so we're going to let the original forecast ride. We're also noticing something potentially interesting in the level of stock prices with respect to the alternate future trajectories our dividend futures-based model projects, where they would appear to be consistent with the levels that our model had projected earlier this year, before the year's volatility events really took off, adding considerable noise to its projections. We'll take a closer look at what that might mean for our red-zone forecasting approach in March, after all the data for the S&P 500 through the period of the short term volatility echo has come in.

While Week 2 of February 2018 was relatively subdued compared to the previous two weeks, there was no absence of potential market moving news during it. Here's the roundup of headlines and stories that caught our attention during the week that was.

Meanwhile, The Big Picture's Barry Ritholtz outlined the positives and negatives for the U.S. economy and markets for the second week of February 2018.