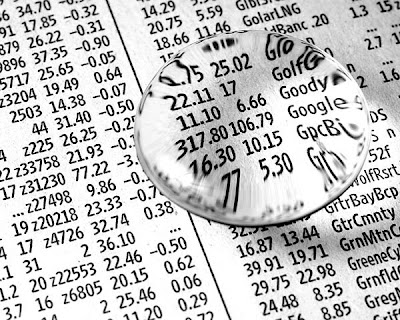 Changes in stock prices are largely driven by changes in the expected future growth rate of their corresponding trailing year dividends per share. Today, we're going to show you how that works, with math. You've been warned - if you don't want to deal with math, now's the time to bail out!

Seriously. We'll be using a lot of algebra. This is your last chance....

As we've formulated it, these accelerations represent the change in the compound annual growth rate of stock prices (Rp) and trailing year dividends per share (Rd) between two points in time (Δt):

Substituting these expressions back into our basic relationship gives the following:

Multiplying each term on both sides of the equation by the time interval (Δt), we are able to eliminate this term altogether:

For these equations, i represents the more recent data, while i-n indicates an older data point, occurring some n periods or time before i. Substituting these terms into our equation relating the compound annual growth rates of stock prices and trailing year dividends per share leads to the following equation:

We'll next simplify the equation further by letting T equal 1 period of time. This allows us to eliminate the exponents, but also requires that we set the time interval between (i) and (i-n) to span the same time interval. We get the following equation:

Our next step will be to solve for P(2), the most recent stock price. First adding P(1)/P(1-n) to both sides of the equation:

We'll finally solve for the most recent stock price by multiplying each term in the equation by P(2-n):

But wait, that's not all! Since changes in stock prices are largely driven by changes in the expected future growth rate of their corresponding trailing year dividends per share, we need to account for the fact that investors are looking ahead in time. We'll do this by indicating that the dividend data is shifted ahead some period of time, s:

Now, how would we use this equation in practice? Let's say that our stock price data consists of the average daily closing value of the S&P 500 and the index' corresponding trailing year dividends per share for each month since January 1871. If we use year-over-year data for our calculations (T equal to one year), we might calculate the average monthly stock price for any month beginning with February 1872 as follows (click the image for a larger, more readable version):

In this equation, we're left with two unknowns in being able to anticipate where stock prices will be set: our amplification factor (m), and our forward looking time shift (s), which itself varies with time. Both of which might be determined in practice by observation and trial and error. We should also point out that the variations in these two factors are specifically what makes the stock market a chaotic place.

And if you can get your hands on dividend futures data, you might reasonably predict how stock prices today will adapt to changes in how fast investors expect dividends to grow in the future.

There's a tool in here somewhere....

Update 28 April 2009: Based on some really good feedback from a really sharp reader, we've altered the images for the second, third and fourth equations (click links for originals) presented in this post, changing "dt" to "Δt", to better clarify that we're not necessarily looking at infinitesimal units of time, but rather discrete intervals of time!