Starting back in 2012, we have taken a snapshot of the Standard & Poor's forecast for future earnings in the S&P 500 every three months, approximately at the midpoint of the current quarter. Today's snapshot of the trailing year earnings per share for the S&P 500 reveals something that we have not seen in all the time that we've visualized S&P's earnings forecasts: a dramatic increase in the amount of earnings per share that the companies of the S&P 500 are forecast to record before the end of the calendar year. 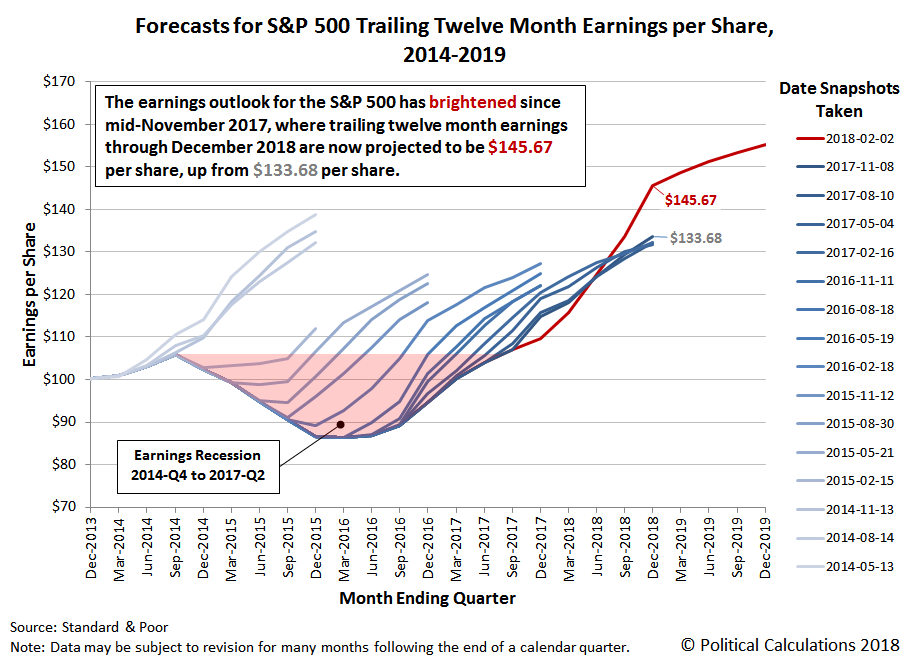 This change may be directly attributed to the passage of the Tax Cuts and Jobs Act of 2017, which was signed into law on 22 December 2017. The law provides for a permanent reduction in U.S. corporate income tax rates, the statutory rates for which had previously been ranked among the highest in the world.

Since the amount of corporate earnings is determined after a company's revenues have been subjected to taxes, a rather large portion of this change reflects the positive impact of the reduction in U.S. corporate income tax rates. At the same time, there also has been an organic improvement in corporate earnings in recent months, which has been driven by improving business conditions. This latter effect can be seen to some extent in the chart above as the smaller improvement in projected earnings per share recorded for the S&P 500 in the period from mid-August 2017 to mid-November 2018.

Those improvements buck the "usual" pattern that we've seen consistently over the past six years, where projected earnings per share start off strong, but then go on to progressively weaken over time as the actual future for earnings failed to live up to initially forecast expectations.

Update 24 February 2018: Lance Roberts adds his perspective on the change in expected future earnings at RealInvestmentAdvice, while Ed Yardeni considers how that might affect stock prices going forward at his site.