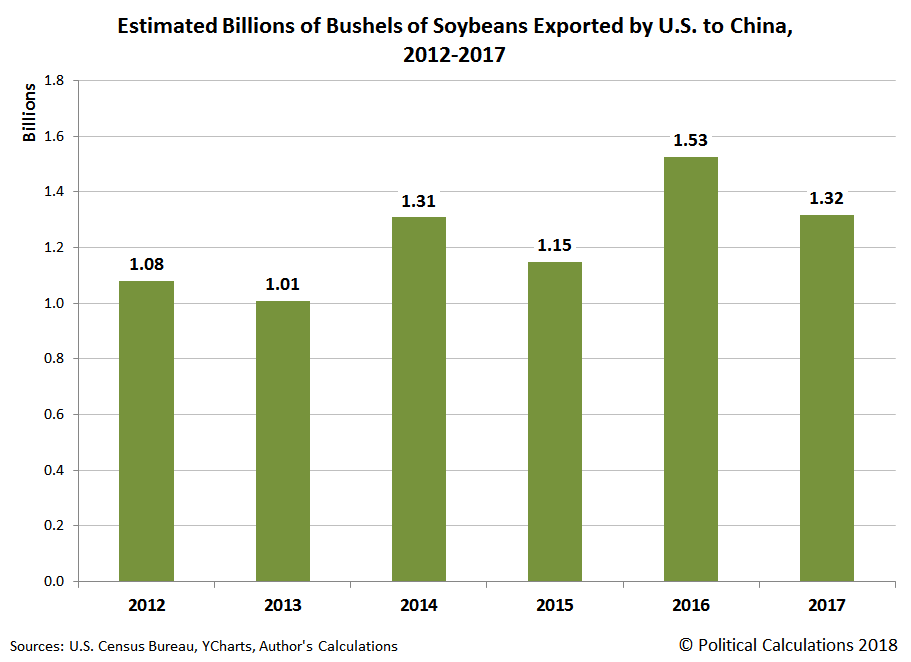 2016 would appear to be have been the most successful year to date for U.S. soybean exporters, but there's a lot more to that story.

Although the year saw optimal growing conditions for soybeans in the U.S., which resulted in a bumper crop, one of the main contributors to the success of U.S. soybean producers that year came about as a result of a severe drought in Brazil, the world's top soybean exporting nation.

Brazil's drought created a unique opportunity for U.S. soybean producers seeking to claim a larger share of the world market in 2016. Since Brazil's annual harvest peaks in the second quarter of each year, thanks to its Southern hemisphere geography that puts its growing seasons six months ahead of the U.S., the news that Brazil's 2016 soybean crop and exports would be reduced because of drought conditions provided U.S. growers with the advance warning they would need to respond to what, for them, would be an opportunity.

So they took it. U.S. soybean producers planted seed varieties that would optimize the yield for their crops, which helped contribute to 2016's bumper crop in the United States. They then aggressively harvested the crop to satisfy China's domestic demand for soybeans, where China was buying up as many bushels of soybeans from the U.S. as they could that year.

But there was a dark side to that success, which is now becoming increasing apparent. In choosing seeds that would maximize crop yields, U.S. soybean producers sacrificed the protein content of their crop, effectively reducing the quality of their product. In 2017, that meant having to compete with higher quality soybeans grown in Brazil as that nation's crops have rebounded from 2016's drought conditions.

U.S. soybean growers are losing market share in the all-important China market because the race to grow higher-yielding crops has robbed their most prized nutrient: protein.

Declining protein levels make soybeans less valuable to the $400 billion industry that produces feed for cattle, pigs, chickens and fish. And the problem is a key factor driving soybean buyers from the U.S. to Brazil, where warmer weather helps offset the impact of higher crop yields on protein levels....

Soybeans are by far the most valuable U.S. agricultural export, with $22.8 billion in shipments in 2016. Declining protein levels and market share pose another vexing problem for soy farmers already reeling from a global grains glut and years of depressed prices.

The quality problems of U.S. soybean producers go beyond that however. In their race to export as many soybeans as they could to China in 2016, they also got sloppy in their harvesting and processing practices, where an excessive amount of foreign material was being included within the industry's soybean shipments.

China's response to that problem was to impose stricter import specifications on U.S. soybean exports at the end of 2017, which is expected to negatively impact up to 50% of the nation's soybean exports in 2018. That impact will come in the form of higher costs for U.S. soybean producers, who will have to take steps to reduce the amount of non-soybean material that will be shipped to China.

Half of U.S. soybeans exported to China this year would not meet Chinese rules for routine delivery in 2018, according to shipping data reviewed by Reuters, signaling new hurdles in the $14-billion-a-year business.

More stringent quality rules, which take effect on Jan. 1, could require additional processing of the U.S. oilseeds at Chinese ports to remove impurities. This could raise costs and reduce sales to the world’s largest soybean importer, according to U.S. farmers and traders.

Half of the 473 vessel shipments in 2017 and half the total 27.5 million tonnes of U.S. soybeans exported to China this year contained more than 1 percent of foreign material, exceeding a new standard for speedy delivery, according to U.S. Department of Agriculture (USDA) data compiled by grain broker McDonald Pelz Global Commodities LLC.

In the short run, the choice to sacrifice quality to pursue additional revenue and higher profits made a lot of sense to U.S. soybean producers. In the long run, that choice could very well leave them worse off than if they hadn't taken that path. What choice would you have made in 2016 if you were playing the soybean export game?