Political Calculations
Unexpectedly Intriguing!
February 26, 2018
The S&P 500 Calms Down in Week 3 of February 2018

The third full week of February 2018 marked the quietest week for the S&P 500 (Index: INX) over the past month, although the market closed on Friday, 23 February 2018 with an unexpectedly strong rally. 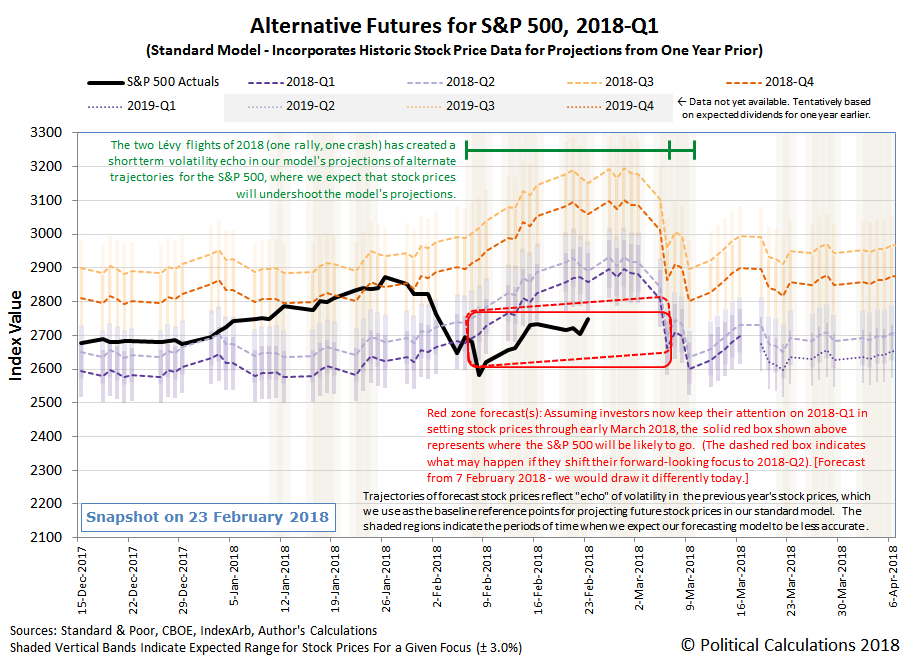 That strong response on Friday appears to have been largely motivated by the news that the Federal Reserve would be less aggressive than had been speculated in its plans to hike short term interest rates in the U.S. during 2018. The following table shows what investors expect for the future for the Federal Funds Rate in 2018, where quarter point rate hikes are expected to be announced at the Fed's Open Market Committee meetings scheduled for the end of March (2018-Q1), June (2018-Q2) and December (2018-Q4).

In the table above, we're trying something new to help better visualize what the probabilities indicated by the CME Group's FedWatch tool for the likely timing of changes in U.S. interest rates are communicating. Here, the cells that have been highlighted in yellow in each row represent when the odds that the Fed will hike the Federal Funds Rate at the selected date are greater than 50%, where the cell whose probability is shown in boldface font indicates the minimum target range to which they will likely be set. [If you're reading this article on a site that republishes our RSS news feed, you may need to click through to our site to see the color-coded formatting.]

Outside of Friday's market moving headline, the rest of the news of the week was mostly consistent with generating what we would describe as "typical" levels of noise for the S&P 500 in what was a holiday-shortened week of trading.

Elsewhere, Barry Ritholtz identified the positives and negatives for the U.S. economy and markets in Week 3 of February 2018, where good news was found in the stock market and the economy at large, and the bad news of the week could mostly be tied to the impact of rising interest rates.

Coming soon, we'll take a look at the volatility in the S&P 500 over the past month to provide some proper historical context to consider it!