In Philadelphia's City Hall, the proverbial chickens have begun to come home to roost as a direct result of the failure of the city's controversial soda tax to bring in as much revenue as city leaders were counting upon to fund the spending that they used to justify imposing the tax.

Instead, the tax has fallen nearly 15% short of its annual revenue target of $92.4 million in its first year, making it just a matter of time before the city's politicians might turn to either hiking other taxes to make up the shortfall or to impose cuts on the spending ambitions of the city's elected officials. 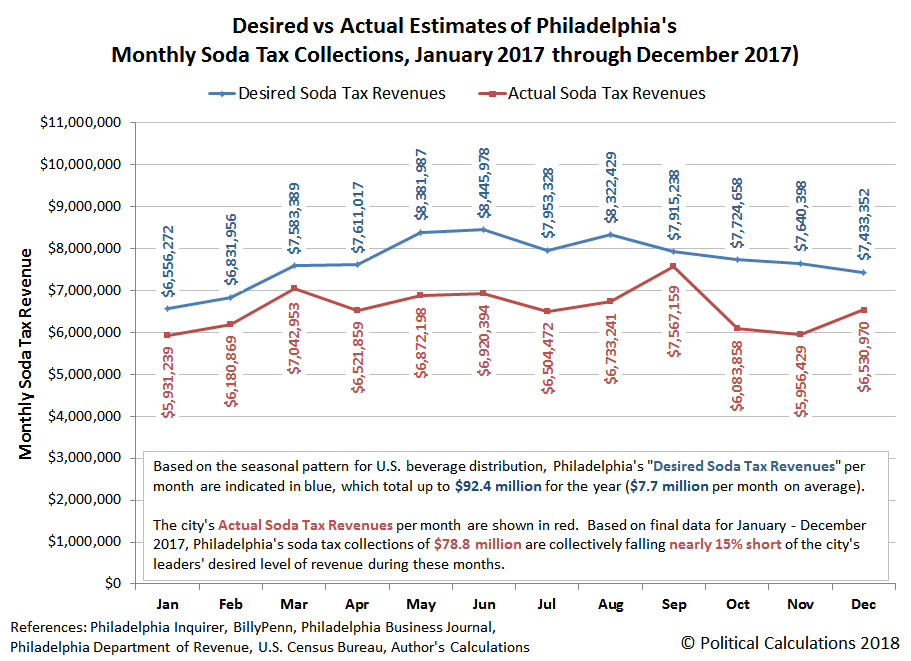 In a dramatic reversal from statements city officials made just two months ago, where they refused to contemplate any scaling back of the Philadelphia Beverage Tax' revenue projections or cuts to the programs that revenue was meant to support, the city's mayor, Jim Kenney, is finally being forced to acknowledge that the tax isn't delivering on his promises to Philadelphians.

With 12 months of beverage tax data to build on, the Kenney administration is lowering its revenue expectations for the tax in the current fiscal year and it now anticipates the soda tax will bring in a similar dollar amount across each of the next five fiscal years.

That's a change from the $92 million annual revenue originally predicted prior to PBT's implementation, a number the administration stuck by as monthly revenue figures throughout last year indicated it would be missed. With $78.8 million collected over 2017 (the calendar year is split between two fiscal years), the tax, in a sense, reached 85 percent of its collection goal. The dollars supported 12 community schools and the creation of 2,000 pre-K seats, 700 of which have already turned over to new students.

At this writing, the controversial tax on the distribution of all regular or diet, naturally or artificially-sweetened beverages for retail sale within Philadelphia's city limits still faces legal jeopardy, where the state's supreme court has agreed to hear the case. The question of whether the tax can even be legally imposed under Pennsylvania state law has restrained Philadelphia city officials from being able to spend all of the proceeds that they have collected from having imposed the tax, with $30 million of their total take currently sitting idle in the city's accounts.

Mayor Jim Kenney would also appear to be hedging his bets that the Pennsylvania Supreme Court will rule in the city's favor. The mayor is calling for new tax hikes to cover projected shortfalls in spending to support the city's schools that could easily be extended to also cover the shortfalls caused by the failure of Philadelphia's sugary drink tax to generate as much revenue as city officials desired to fund the Mayor's programs to provide "free" pre-K education and to support community schools.

The mayor’s plan, released Thursday, would send a projected $980 million to the School District of Philadelphia over the next five years. That money would ward off any potential cuts and give the district long-term financial stability it hasn’t enjoyed in years.

To make the math work, the mayor is proposing four major revenue streams:

It would therefore seem that Philadelphia's mayor will be taking the route of hiking taxes on Philadelphians across the board rather than reducing any of his promised spending.

From a fiscal policy standpoint, that city officials even supported using the proceeds from Philadelphia's beverage tax to fund pre-K and community schools was always highly questionable, where in its role as a "sin" tax, if it was in any way more successful than expected in reducing the purchases of taxable sweetened beverages in the city, it would have guaranteed that the funding for these programs supported by the tax would be at risk. 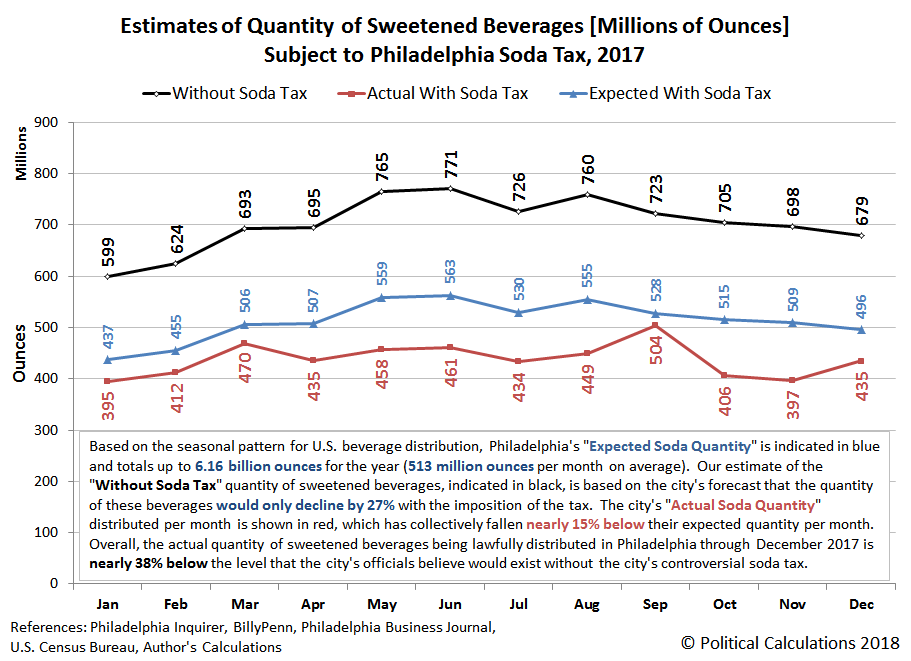 Which, more or less, is exactly what happened, where the tax prompted a much more severe than anticipated decline in the sales of beverages subject to the tax, as can be seen in the chart above. The extent to which the tax may have meaningfully reduced the consumption of the taxed beverages in the city is still an open question, where city residents have demonstrated that they are able to avoid the taxes as they might choose through a variety of lawful strategies.

[To close on a side note, the city's revenue report for January 2018, which finalizes the actual revenue collected for the Philadelphia Beverage Tax through December 2017, indicates that the city only collected $6,343,962 for beverages distributed in Philadelphia during the month of December 2017. The $6,530,970 figure indicated in our first chart for the month of December 2017 includes $187,008 of revenue for beverages that were subjected to the tax in January 2018. The relatively small difference makes no meaningful difference in our analysis.]