The risk of a national recession beginning in the United States anytime in the next year, or specifically between 16 March 2018 and 16 March 2019, is slightly over 0.5%. If that sounds very familiar, that is because we wrote an almost identical lead sentence nearly six weeks ago!

Then, as now, the occasion for our using that introductory sentence once again is the eve of a two-day meeting for the Federal Reserve's Open Market Committee (FOMC), which is expected to announce that it will boost its target range for short term interest rates in the U.S. by a quarter percent, increasing to be between 1.50% and 1.75%.

But it hasn't yet, so the probability of a national recession starting sometime in the next 12 months has remained about the same, as confirmed by the latest update to our recession probability track. 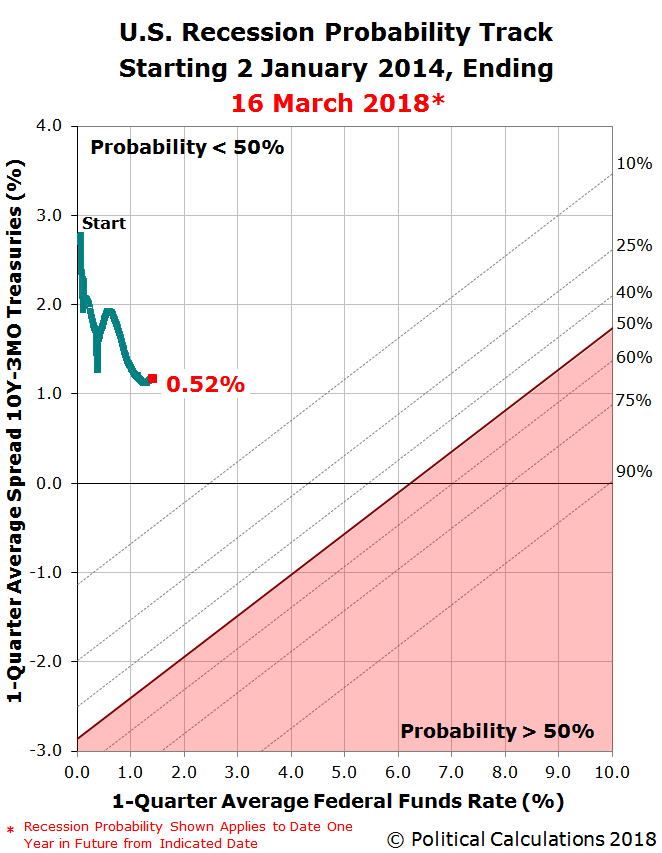 This update confirms a prediction that we made six weeks ago, where we made the following observation after finding something worth noting about the direction of U.S. Treasury yields:

For our recession probability track, that means momentum has been building for a potential reversal in the downward component of its trajectory toward increased odds of recession.

Sure enough, that's exactly what happened over the last six weeks! Unfortunately, we do not expect that positive trend to continue.

Since that is happening at the same time that the Fed is set to hike its Federal Funds Rate, the combination of all these things means that the risk of future recession starting in the U.S. economy will rise, primarily as a consequence of the Fed's action.

Our analysis above is based on Jonathan Wright's 2006 paper describing a recession forecasting method using the level of the effective Federal Funds Rate and the spread between the yields of the 10-Year and 3-Month Constant Maturity U.S. Treasuries. If you would like to play the recession forecasting game at home, or just want to run the latest numbers yourself without having to wait another six weeks for us to get around to it when the Fed is getting set to meet again, our tool for Reckoning the Odds of Recession is available to satisfy your recession forecasting needs.

If you use the latest data for the treasury yields and the Federal Funds Rate in our tool, you'll find that your results will differ from the data we've presented in the chart above. That is because the chart follows Wright's methodology in using the one-quarter average for the yields and rates data used in its calculations, where the tool's results based on the most recently available data can be taken as an indication of the direction that the recession probability track is heading when compared with the information provided by our recession probability track chart.

Give it a shot - there's no legitimate reason why economists should have all the recession forecasting fun!

Update: Lance Roberts offers some valuable insights into the difficulties of recession forecasting and considers a variety of other indicators.