The Mauna Loa Observatory has been collecting atmospheric carbon dioxide data for sixty years. Located in Hawaii, the observatory's remote location with respect to the major population centers of the world make it a relatively good place to measure the concentration of gases and other substances, which have had a lot of time to become well-diffused within the Earth's atmosphere by the time they reach the mid-Pacific Ocean.

We're going to mark the Observatory's sixtieth anniversary of collecting and reporting the concentration of carbon dioxide with a series of charts showing some of the kind of information that can be extracted from the observatory's raw data. First, the following chart shows the measured concentration of CO2 for each month from March 1958 through March 2018. 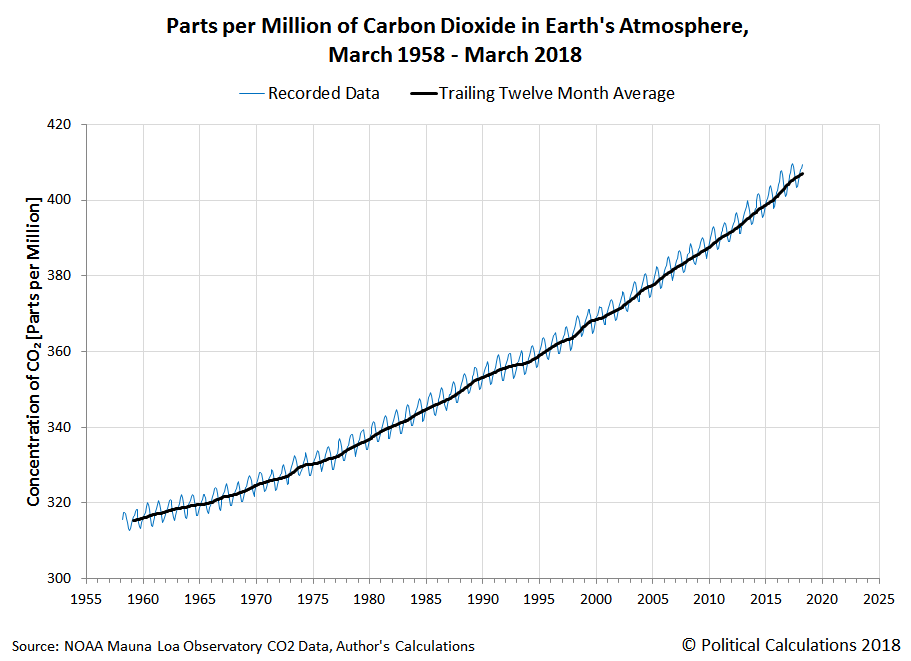 As you can see, there's a really strong seasonal pattern in the observatory's CO2 concentration measurements, which we've smoothed to show the overall trend over time by calculating the trailing twelve month average for atmospheric carbon dioxide.

Let's look a bit closer at that seasonal pattern in the next chart, where we've simply shown the amount of atmospheric CO2 recorded by month, with each line representing a single year. The effect is a bit like looking at tree rings, where you can get a sense of how much CO2 was added into the Earth's atmosphere from one year to the next as you look from the bottom to the top of the chart. The wider the gap, the more CO2 was added to the atmosphere. 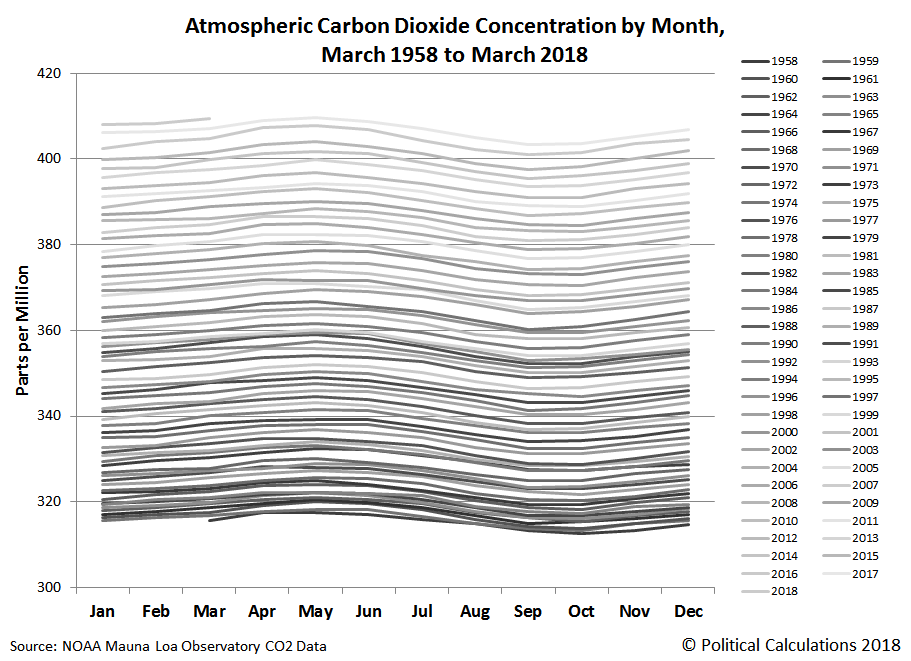 Most carbon dioxide in the Earth's atmosphere gets there through human activities, but there are also natural elements that can also greatly impact how much CO2 accumulates in the air in a given year. Perhaps the most significant of these are the El Niño and La Niña weather events that occur at irregular intervals, which have a considerable impact on the accumulative concentration of CO2 in the atmosphere.

In the next chart, we've focused again on the annual seasonal pattern for atmospheric carbon dioxide measurements, but this time, we're showing the starting month at October each year, which typically coincides with the lowest annual reading for this atmosphere characteristic. We've also indicated each subsequent month's reading as a percentage of the preceding October's data point, but more significantly, we've color coded the resulting lines to indicate whether the Earth was experiencing an El Niño or La Niña event, and if so, its relative strength via line shading, where darker indicates a stronger event. 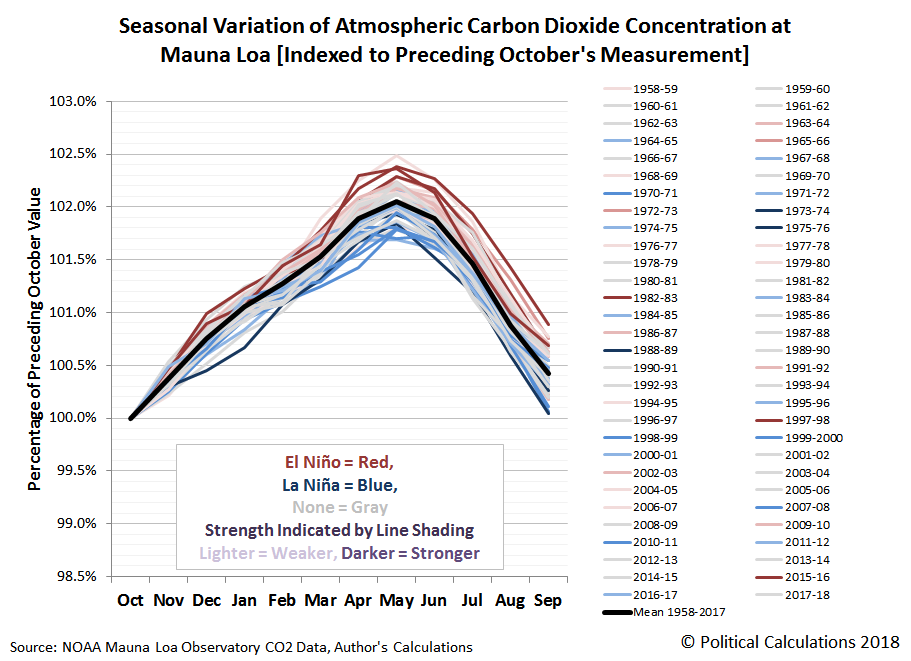 The next chart goes back to the original CO2 level data that we presented in the first chart, but now, indicates the year-over-year change in that data. We've also indicated two years within the last two decades where very strong El Niño events greatly added to the amount of carbon dioxide that was measured in the Earth's atmosphere in the years where the events occurred. 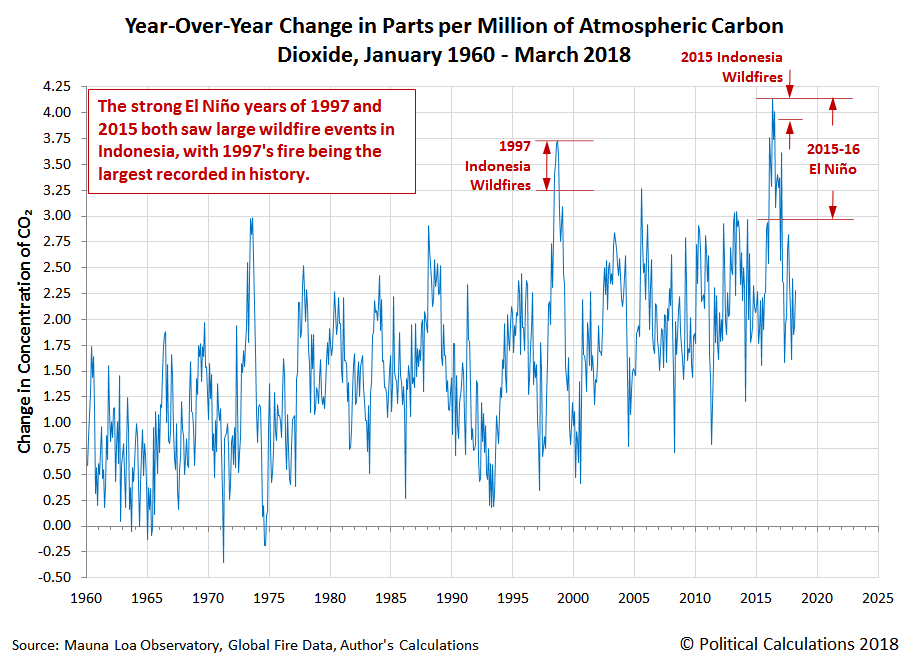 The year over year change in atmospheric CO2 data is still pretty noisy, so we've smoothed that data in the next chart by calculating its twelve month moving average. Only now, we've added additional information to indicate some of the human contribution to Earth's atmospheric carbon dioxide levels. Or more specifically, we've indicated when human activities (and carbon dioxide output) waned because of economic factors such as recessions, where perhaps the biggest negative event was the collapse of the Soviet Union in the early 1990s. 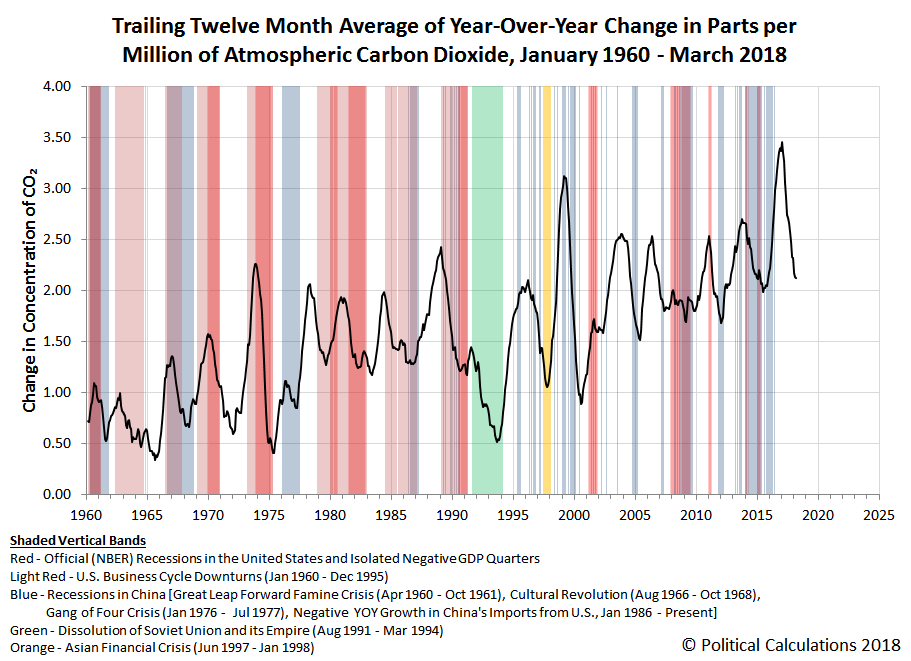 The two biggest spikes in the data however coincide with the years of 1997 and 2015, which were marked by very strong El Niño events, where that natural phenomenon added billions of tons of carbon dioxide to the Earth's atmosphere in those years.

How different would the data look if we were able to compensate to account for the effects of that natural contribution? The following chart shows our first attempt to quantify what the Earth's atmosphere might have seen if not for those very strong El Niño events. 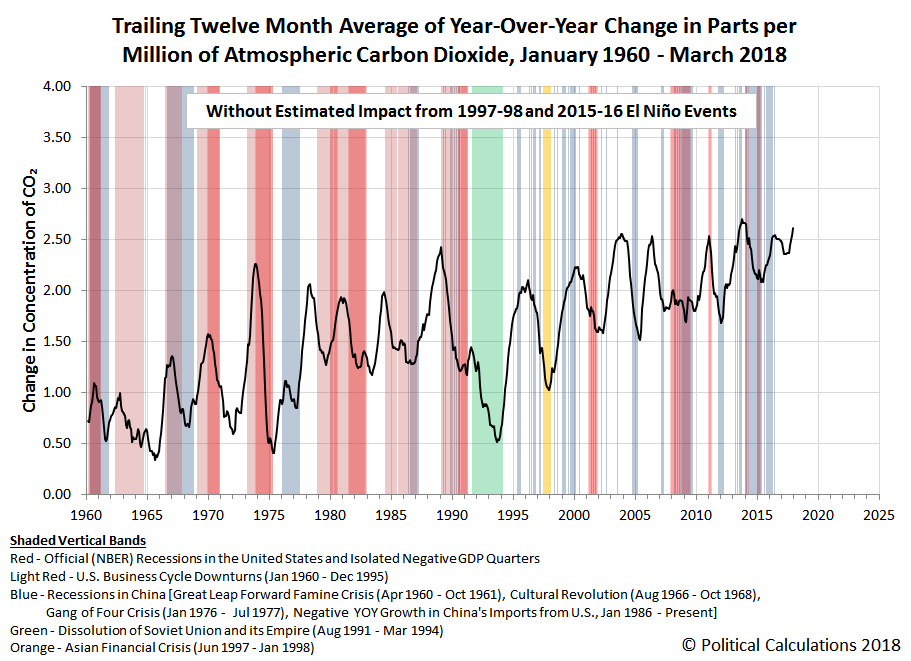 Because we've now quantified the impact of El Niño and La Niña events on the rate at which atmospheric CO2 levels change, we should be able to better isolate their impacts when they occur, which means that we're now closer to being able to measure the health of the Earth's entire economy using atmospheric carbon dioxide concentration measurements. The next time we visit this data, we'll extend the El Niño filter across the entire data series to find out what we can!