Political Calculations
Unexpectedly Intriguing!
April 26, 2018
The Convergence and New Divergence of GE and the S&P 500

Two months ago, we compared the trajectories of the S&P 500 (Index: INX) and General Electric (NYSE: GE) to the flight paths of starlings as the two were taking diverging flight paths from one another.

Two months later, and the flight paths of the S&P 500 and GE would appear to once again nearly converged. Or rather they almost had, until something happened on Wednesday, 25 April 2018 to send them diverging again! 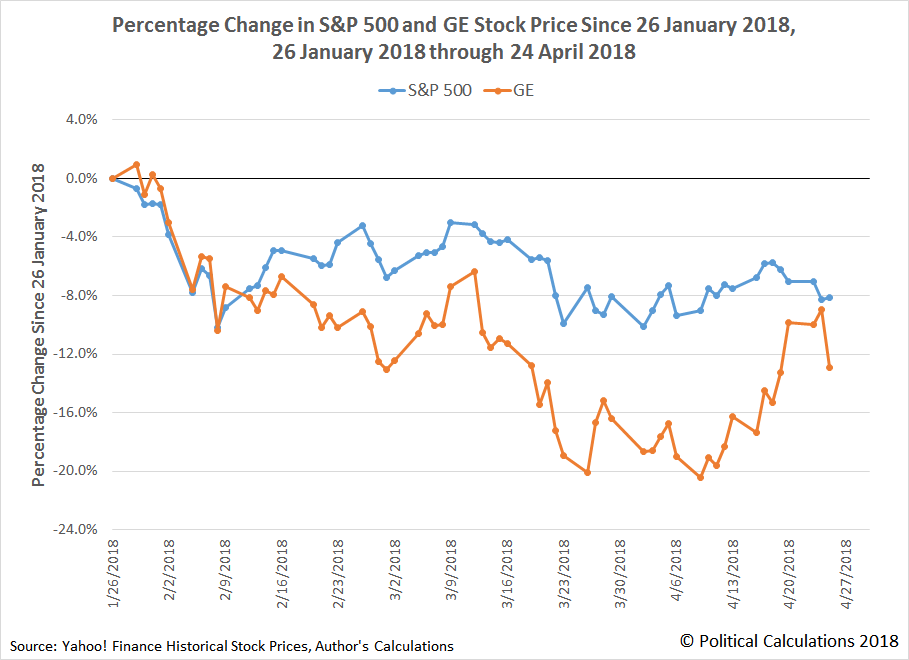 As you can see, GE continued on its course of divergence with the S&P 500 through mid-March 2018. Here are the major headlines that coincide with the continuation GE's path of divergence, where speculation set its volatile course in the market:

Alas, that last headline was little more than a speculative hope that didn't pan out, so GE's stock price dropped back down to reach its bottom within a matter of days.

And then, beginning in mid-April 2018, GE took a strong turn toward the better, where the company's stock price moved to converge with the overall S&P 500. Here are the headlines that coincide with GE's period of convergence:

But it seems that fate has other plans for GE's investors, where one action by a credit rating firm sent GE's stock price onto a new path of divergence with the S&P 500.

And that's all it takes to disturb the flight path of an individual starling, sending it onto a very different trajectory than the rest of the flock of starlings that is the U.S. stock market!