In running through dividends by the numbers for March 2018, we found that a total of 92 U.S. firms declared that they would cut their dividends, the second highest figure ever reported for monthly data that goes back to January 2004, a period that encompasses the worst of both the Great Recession and the tax hike-motivated Great Dividend Raid.

So to find out, we tapped our two near-real time sources for dividend cut declarations. The following chart reveals what we found: 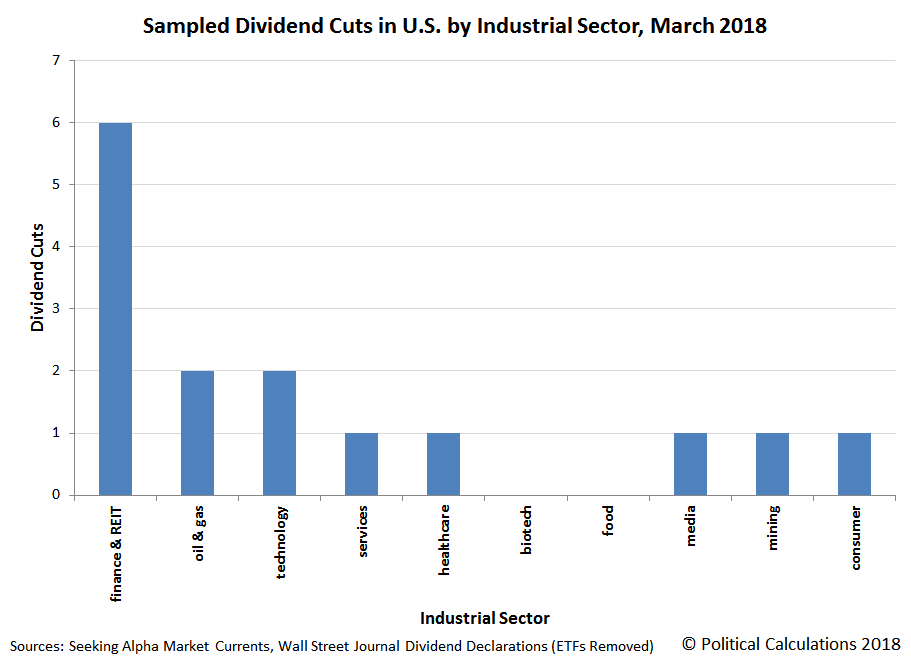 In all, we were able to identify 15 U.S. firms that announced that they would be cutting their dividends in March 2018. Of these, 6 were financial industry firms or Real Estate Investment Trusts (REITs), where the U.S. Federal Reserve's recent series of rate hikes has cut into their earnings, two were in the oil and gas industries, another two were technology-related firms, while we found one firm each in the services, health care, media, mining and consumer goods producing sectors. [In the chart above, we've also identified the biotech and the food industries, which were represented in 2018-Q1's dividend cuts, but which had zero dividend cuts reported in March 2018.]

Those figures exclude Exchange Traded Funds (ETFs), which we omit because these funds often include holdings in companies that issue stock that announce their dividend policies independently, where including them would represent double counting. They also exclude foreign firms whose stocks trade on U.S. stock exchanges, preferred stock, and closed end funds. However, we find that adding all these other types of dividend-paying entities to our sampled total increases the total reported dividend cuts from all entities by 24, for an expanded total of 39 dividend cutting firms. At a minimum then, we're still missing at least 53 U.S. dividend cutting firms.

We also confirmed via Howard Silverblatt of S&P that no S&P 500 firm cut their dividends in March 2018, where he indicated that "in the S&P 500 there were 132 increases and no decreases" for March 2018.

What that information tells us is that the missing firms that cut their dividends in March 2018 are predominantly firms with small market capitalizations, which would likely be off the radar of the majority of investors.

Since we've previously seen dividend cut announcements spike in response to the threat of increased taxes, it has occurred to us that the recent tax rule change that negatively affects many Master Limited Partnerships (MLPs) could potentially account for what we're seeing in the total dividend cut data for March 2018, where perhaps the smallest of these entities have reacted to that change.

In any case, that's the best hypothesis that we have for accounting for the missing dividend cuts. Overall, the 92 dividend cuts reported for March 2018 stands in sharp contrast to dividends for the rest of the first quarter of 2018, which were actually quite strongly positive, as indicated by S&P's summary of that activity for their major indices:

We'll close with our chart showing our sampling of dividend cuts for all of 2018-Q1 by industrial sector: 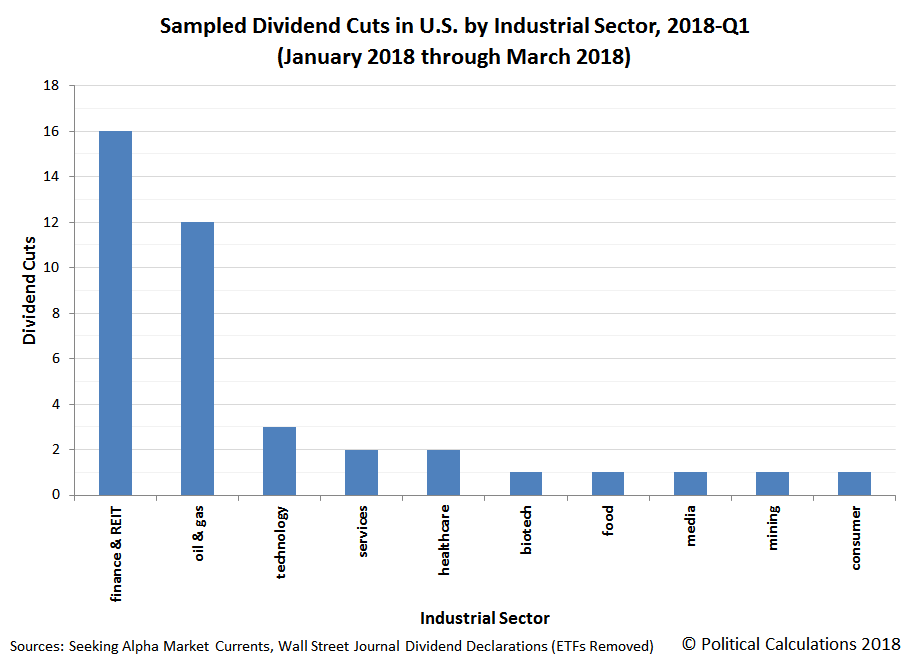 For the quarter, our sample captured 40 dividend cuts, with 16 among finance & REIT firms leading the pack, followed by 12 oil & gas sector firms, 3 technology companies, 2 service industry businesses, 2 health care outfits and one each out of the biotech, food, media, mining and consumer goods sectors.