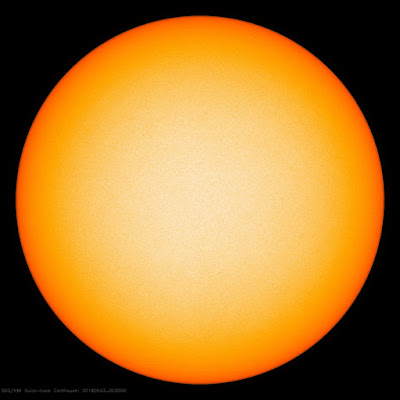 That's how Dr. Tony Phillips of Spaceweather.com introduced an article earlier this week on the approaching solar minimum, the point of the sun's average 11-year cycle when the number of sunspots visible on the surface of the star typically falls to their lowest levels when compared to other points of time during its cycle. 2018 has been somewhat unusual in that the sun's surface has been nearly entirely clear of sunspots during a large portion of the year-to-date.

So far in 2018 the sun has been blank almost 60% of the time, with whole weeks going by without sunspots. Today’s sun, shown here in an image from NASA’s Solar Dynamics Observatory, is typical of the featureless solar disk.

The fact that sunspots are vanishing comes as no surprise. Forecasters have been saying for years that this would happen as the current solar cycle (“solar cycle 24”) comes to an end. The surprise is how fast.

When the number of sunspots declines to the low levels associated with solar minimums, the sun's irradiance, or energy output, also declines and the sun dims, which might at first seems counterintuitive. How can the absence of comparatively dark spots on the sun's surface lead to a decrease in the sun's light output?

We wondered just how much less energy that would mean arriving at the Earth. So, we built a tool to find out!

The key parameters that we need to do the math is the sun's total power output (or luminosity, which is 3.828 x 1026 watts) and the average distance from the Sun to the Earth (149,587,000,000 meters). We've plugged those values as the default values into the tool below, where we've also added a percentage adjustment factor to account for changes in the sun's luminosity, which we've set at 0.0%. Let's run the numbers (if you're accessing this article on a site that republishes our RSS news feed, please click here to access a working version of the tool at our site).

For the default values, we find that the maximum amount of insolation, or solar irradiance, that can reach the Earth at its average distance from the is 1,361.4 Watts per square meter [W/m²]. That's not the same as the amount of solar energy that will actually reach a given square meter on the Earth's surface, where factors like the atmospheric conditions, the curvature of the Earth's surface, where the Earth is in its orbit, the tilt of the Earth's axis, et cetera, will directly impact that value, but this is a decent reference value for considering the amount of total solar energy that can make it out to the Earth from the Sun.

If we change the Percentage Adjustment for Solar Output to -0.1%, we find that the Earth's insolation value drops to 1,360.0 W/m². That may not seem like very much, but Phillips puts that small change into perspective:

A change of 0.1% may not sound like much, but the sun deposits a lot of energy on the Earth, approximately 1,361 watts per square meter. Summed over the globe, a 0.1% variation in this quantity exceeds all of our planet’s other energy sources (such as natural radioactivity in Earth’s core) combined. 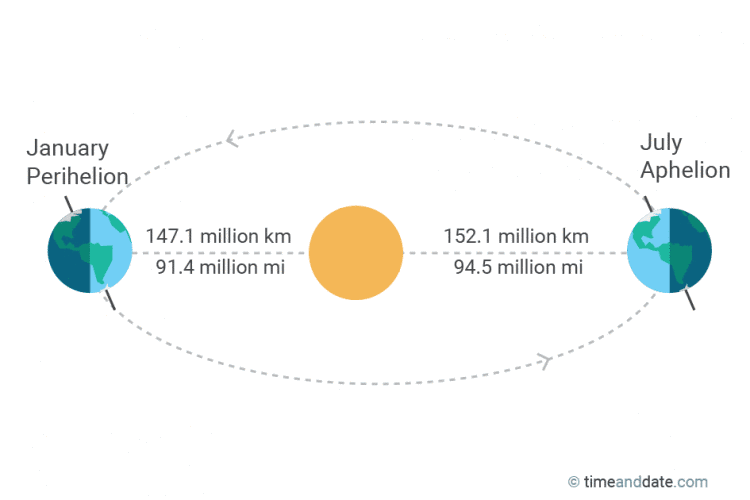 Of course, because we now have a tool to do this math, we can also do it for any planet in the solar system, where we've listed the minimum, average and maximum distances for the terrestrial planets orbiting the Sun below for your entertainment, if you choose to run those numbers!

While we stopped at Mars, that doesn't mean that you have to - here's a link to where you can get the average distances from the sun to the solar system's major points of interest all the way out to Pluto!