The Pennsylvania Supreme Court ended months of potential legal jeopardy for Philadelphia's controversial sweetened beverage tax on Wednesday, 18 July 2018, when it ruled that the tax would be considered to be lawful under Pennsylvania's state constitution.

In a 4-2 majority opinion, the court found that the city had not violated state law by taxing the distribution of beverages. Opponents of the tax had argued that the levy amounted to double taxation because it is passed down to consumers who already pay sales taxes.

The ruling provided a more secure future for the 1.5-cents-per-ounce tax that funds Pre-K, community schools and improvements to parks, libraries, and recreation centers and ended a case that had been closely watched by other cities since Philadelphia became the first big U.S. city to pass a tax on soda and sweetened beverages in 2016.

The state high court's decision largely hinged on whether the well established economics principle of tax incidence would be recognized within the state of Pennsylvania, which is evident from one of the dissenting minority opinions for the case.

The opinion affirmed a ruling issued last year by the state’s Commonwealth Court. Justices Max Baer, Debra Todd, and Christine Donohue joined Saylor in the majority. Justice David N. Wecht and Justice Sallie Updyke Mundy each wrote dissenting opinions. Justice Kevin M. Dougherty, who is from Philadelphia, did not participate in the case.

Wecht, in his dissent, called the idea that the city’s tax is levied on beverage distribution “convenient fiction,” writing instead that taxing distribution of beverages specifically intended for retail sales is an illegal duplication of the state sales tax.

“A rose by any other name smells just as sweet, and, whether styled a retail tax or a distribution tax,” he wrote, and the tax at issue ends up “burdening the proceeds from the retail sale of sugar-sweetened beverages.”

A nearly identical tax in Chicago was repeatedly blocked under Illinois' state law and federal law by that state's judges who recognized the tax incidence concept back in 2017, forcing that city's legislators to considerably revise it before being allowed to go into effect. That soda tax subsequently proved to be so unpopular that it was repealed after two months of being in effect.

Philadelphia's beverage tax has likewise been unpopular, where it has underperformed both city officials' original expectations and their subsequently lowered expectations. 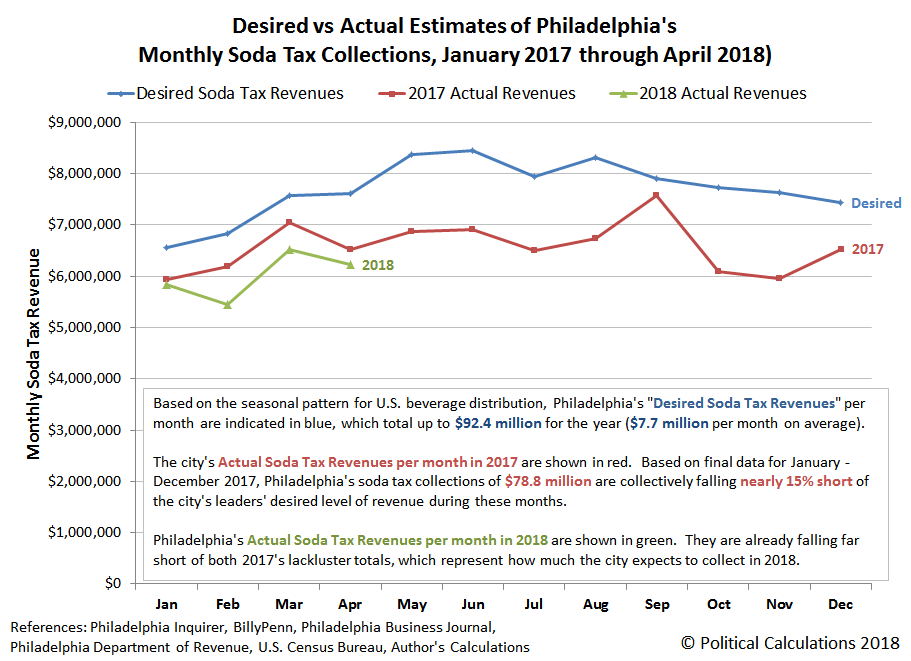 It definitely hasn't been the kind of reliable source of tax revenue for funding things like park improvements, community schools or "free" pre-Kindergarten/daycare programs that Philadelphia residents might have hoped to have. Then again, Philadelphia city officials might want to rethink their plans for instituting a city-wide pre-K program, given the surprisingly negative results for a large, randomized control trial that were just recently reported.

Not to mention the apparently massive problems that Philadelphia city officials have with responsibly handling taxpayer money, but that's a different story for another day!