Although the trading week was shortened by the Fourth of July holiday, the S&P 500 appeared to confirm something that we've been noticing for several weeks: U.S. stock market investors aren't very concerned about the developing trade war between the U.S. and China.

The latest evidence can be found from the market's reaction to the imposition of threatened sanctions on China-produced goods by the U.S. on Friday, 8 July 2018 and China's retaliatory tariffs that soon followed. All of which happened before U.S. stock markets opened. 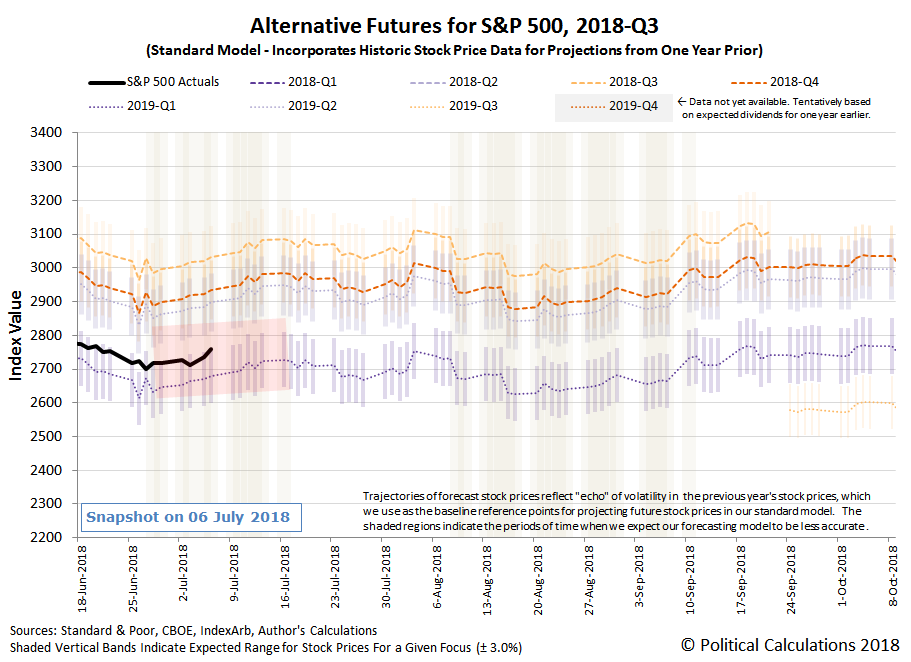 Not only did the S&P 500 close up for the day, it continued the upward trend that started the day before. For something that is already having a measurable and negative impact on the U.S. and Chinese economies, the reaction of investors to the transition of the new batch of U.S.-China tariffs from hypothetical to real is noteworthy for their lack of negative reaction during the week.

Speaking of which, through Week 1 of July 2018, we find that the S&P 500 is consistent with the redzone forecast that we projected a week ago, where we assumed that investors would be primarily focused on the expectations associated with the distant future quarter of 2019-Q1 in setting current day stock prices, which our standard dividend futures-based model would be likely to understate in the period from 28 June 2018 through 17 July 2018. That understatement is attributable to our model's use of historic stock prices as the base reference points from which we project the future values of the S&P 500, where we anticipated that the past volatility of stock prices would mildly skew our model's projections during this period.

As for the news of the week that was, outside of the newly imposed tariffs, it was about as light as would ordinarily be expected during a holiday week in the U.S.

Elsewhere, Barry Ritholtz found an equal number of positives and negatives in the economics and markets news for Week 1 of July 2018.

It's possible that the budding U.S.-China trade war will eventually serve up more than noise to affect U.S. stock prices, but so far, it's not having a meaningful impact upon the S&P 500.