Political Calculations
Unexpectedly Intriguing!
August 3, 2018
How Big Is That Fire?

Every summer, the combination of heat and dry weather often makes for prime conditions for fires to break out. When they break out, some can grow large enough to be covered on the news where, almost invariably, the size of the fires is reported in the number of acres that are or have been burning.

Can you quickly visualize how large an acre is?

Denver's KUSA's news team was recently challenged by a viewer who indicated that they would have an easier time understanding how big the fires that had recently been burning in that state if they were reported in units of square miles. Having been trained as journalists, KUSA enlisted Metro State University math professor Kellie Zolnikov to explain the math.


That's the kind of useful math that we like to make into tools here at Political Calculations, so we've put together the following one that you can access on your mobile device to do it! [If you're accessing this article on a site that republishes our RSS news feed, please click here to access a working version at our site.]

But that's not all! Our tool will do the same math for fans of the metric system. And since very big fires are often expressed with in terms of how they compare to the size of Wales, which is just under 92% of the size of New Jersey (the closest U.S. unit of area to something that size), we've gone the extra mile to do that calculation as well.

Of course, most wildfires don't burn in perfect squares. Fortunately, online application maker DaftLogic offers a free online tool that will calculate the area you define on a Google map (via Core77's Rain Noe):

Part of my duties on the farm I'm living on is to mow the pastures. The other day I completed it for the first time. I did it in chunks and it took three days. I wanted to know what the actual acreage of the pastures is, but no one I asked knew.

Then I found this handy, free online tool that calculates it for you. DaftLogic's Google Maps Area Calculator Tool lets you punch up an address, then trace a feature on the map (and multiple non-adjoining features, if you'd like), and it then spits out the area in square meters, square kilometers, acres, hectares, square feet, square miles and square nautical miles, which will come in handy if your property gets flooded.

Even though it's way more capable, we used the tool to draw a simple square covering some 218.71 square miles over the metropolitan area of Denver, Colorado. That's nearly 140,000 acres, or 2.7% of the size of Wales. Here's the screen shot of the app's output. 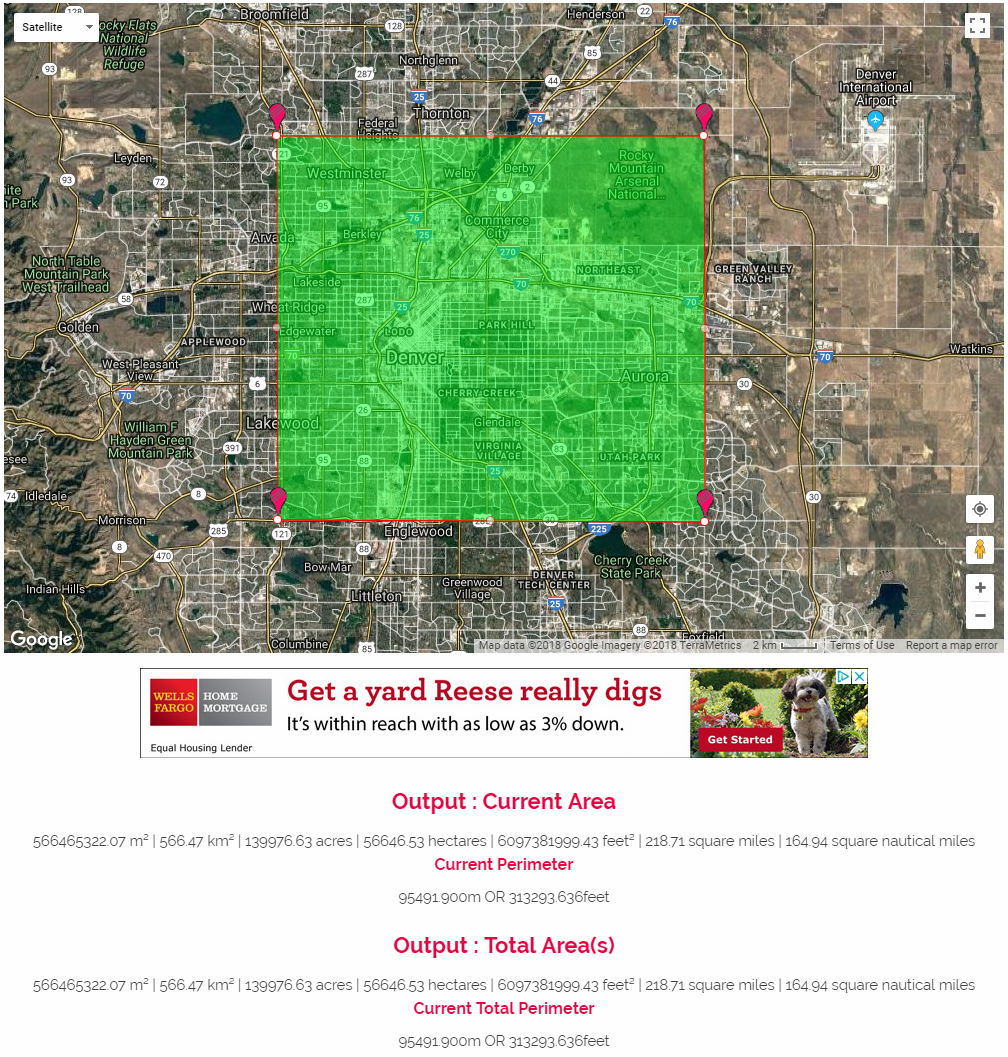 Does that help make it easier to visualize the size of all the wildfires that were burning in Colorado at the beginning of July 2018?

Update 7 August 2018: As of 6 August 2018, the Mendocino Complex fire in California has burned an estimated 283,800 acres, making it the largest single wildfire event in recorded California state history, and over double the size of all the fires that were burning in Colorado at the beginning of July 2018. That's the equivalent of a 21.1 by 21.1 mile square over Los Angeles!