So how is that possible? After all, a new record high value for the S&P 500 should mean that its total market capitalization, the combined value of all the shares of the component company stocks that make up the index, are also setting new record high values, right? So why did the S&P 500 only break one record for market value on Friday, 24 August 2018 and not two records, like it did on 27 August 2018 for both the index' value and its market cap?

To help better see where the S&P 500 ended up short on the market cap measure, even though it had broken its previous record high index value, we've put together the following chart revealing our estimates of the daily value of the S&P 500's total market cap from the end of 2017-Q4 through Monday, 27 August 2018. 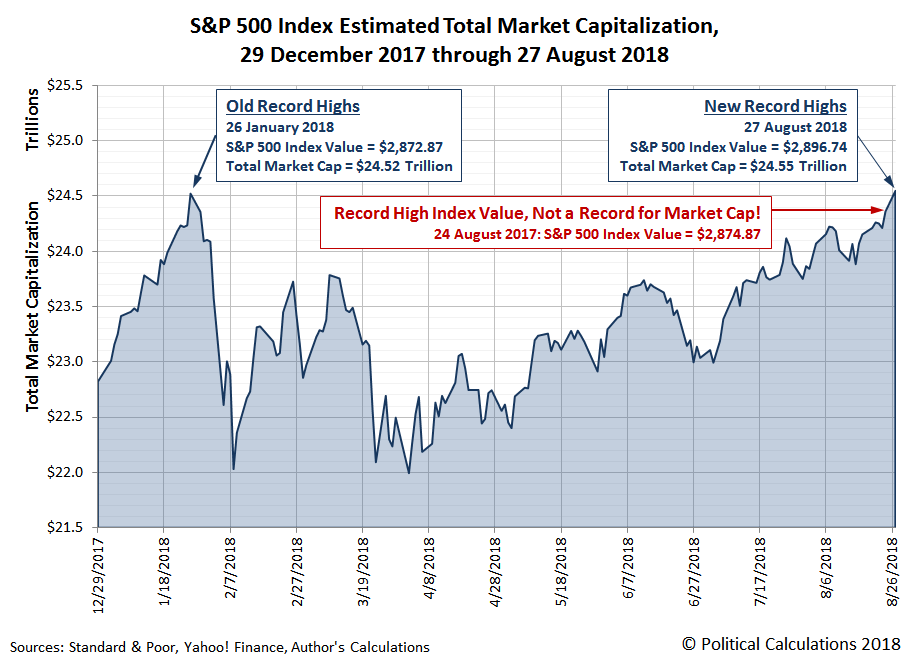 The reason for that outcome turns out to be mathematically simple. Here, because the index' total market capitalization is the product of its index value and the S&P 500 divisor, which can be thought of as being the equivalent to the number of shares that investors would collectively hold in the S&P 500 if it were a single publicly-traded corporate entity like Apple (Nasdaq: AAPL) or ExxonMobil (NYSE: XOM), the only way the S&P 500's market cap could be less on 24 August 2018 than it was on 26 January 2018, despite the value of the index now being higher, is if the value of the S&P 500 divisor had declined during the intervening months. When we check that data, we find out that's exactly what has happened.

There are multiple contributors to that outcome. When a component company of the S&P 500 does things like execute a merger, or spin off business units into new publicly-traded companies, or split their stock, or conduct a reverse-split, or buys back their shares, or issues new ones, or when an old company is removed from the index to make way for a new company being added to it, these kinds of factors will change the overall number of outstanding shares in the market. Standard and Poor has proprietary methods for keeping track of this action, but the level they come up with for the S&P 500 divisor reflects the overall net changes that they track for all the companies whose shares of stock compose the index.

In this case, we suspect that the underlying story is one that involves share buybacks, which have been occurring pretty steadily since the S&P 500 divisor last peaked on 31 December 2013. Which itself was a brief blip following a much larger downward trend that began back in 2004, when the S&P 500 divisor reached its all-time record value.