Political Calculations
Unexpectedly Intriguing!
September 17, 2018
The Fed Sets Expectations for the S&P 500 in Week 3 of September 2018

The S&P 500 closed out the third week of September 2018 on an upnote, but not by so much that it resumed setting the kind of new record highs that it was just a few weeks ago.

The following chart shows the latest update to our spaghetti forecast chart for the trajectory of the S&P 500, where we find that investors would appear to be currently splitting their forward-looking attention between the future quarters of 2018-Q4 and 2019-Q1, with a somewhat heavier focus on 2019-Q1. 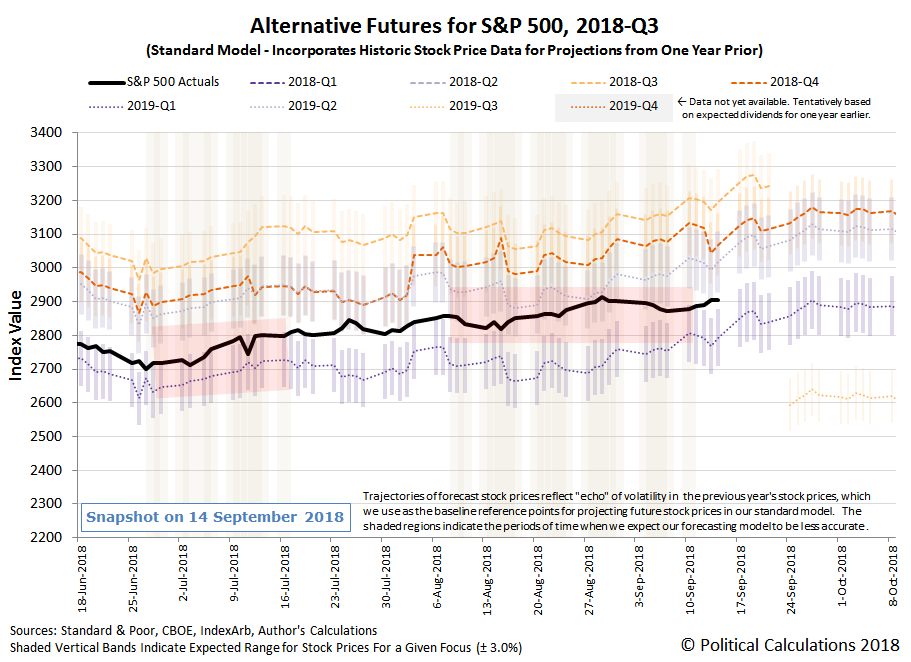 As for why investors would appear to be looking at these two future quarters in particular, we suspect that it has a lot to do with the Federal Reserve's plans for changing its Federal Funds Rate (FFR), the interest rate that banks pay for borrowing money from the Fed, which sets the floor for short term interest rates in the United States. When we last reported upon investor expectations for the future for the FFR just over a month ago, investors were anticipating that the Fed would hike that rate by a quarter point twice more in 2018, in both September and December, then take a breather until June 2019 before doing it again.

Since then, the combination of reports of continued strength in the U.S. economy with multiple statements by the Fed's minions in recent weeks is giving investors reason to anticipate that there will be no breather in the Fed's latest series of short term interest rate hikes. The following table indicates what the CME Group's FedWatch tool anticipates for the future of the Federal Funds Rate based on information from the FFR futures market. (Please click here to view a screen shot of the table if you're reading this article on a site that republishes our RSS news feed, but which doesn't properly render the table.)

The table confirms that investors are now anticipating quarter point rate hikes in September 2018 and December 2018. In addition, as of the last week, investors are now also given just over a 50% probability that the Fed will again hike interest rates by another quarter point or more in March 2019 (as can be determined by adding the probabilities in the table cells highlighted in yellow for the Fed's March 2019 meeting).

That assessment isn't just based on this data. It's also based in part from the news reports we reviewed during the third week of September 2018, where the following stories appeared noteworthy in describing the noise in the market.

For additional aspects of the week's economics and markets-related news, be sure to check out Barry Ritholtz' list of the positives and negatives he found in the week's data.