The fourth week of September 2018 was fairly uneventful for the U.S. stock market. Mainly, that's attibutable to the pre-FOMC meeting media blackout that silences Fed officials, who had been making quite a bit of noise in previous weeks.

Still, it was a big week for the S&P 500 (Index: SPX), in that it reached a new record high closing value of 2,930.75 on Thursday, 20 September 2018. And while the S&P dipped slightly on Friday, coinciding with a pullback in tech stocks, the Dow Jones Industrial Average (Index: IND) went on to set its own new record high to close the week. 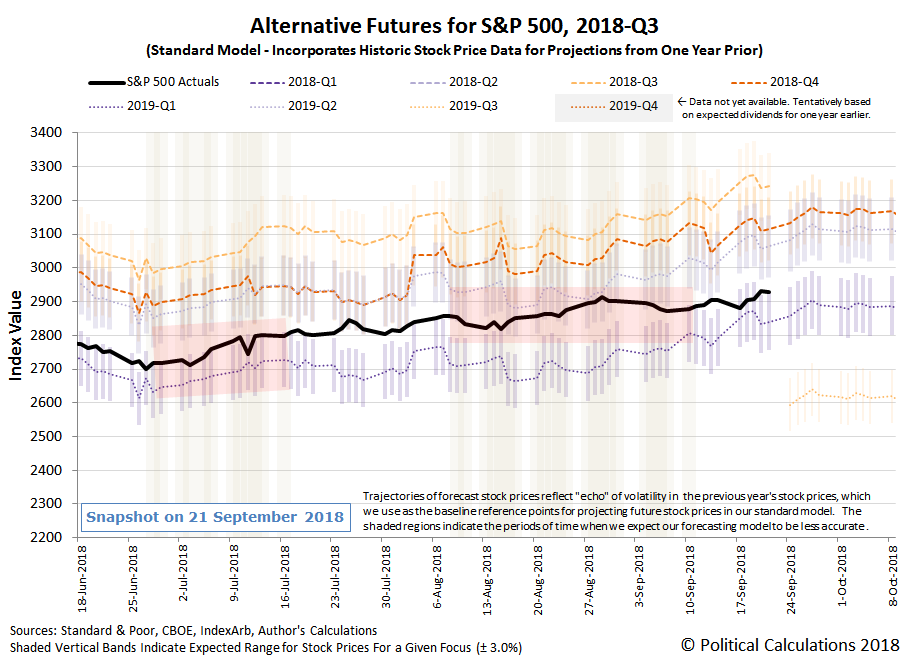 What makes the week that was really stand out from preceding weeks is how little news there was to drive stock prices during it, where investors appear to be focusing more strongly on the distant future quarter of 2019-Q1 in setting the level of the S&P 500, as suggested by our spaghetti forecast chart. The likely reason why is because investors are now giving a little over a 50% chance that the Fed will hike short term interest rates in the U.S. shortly before the end of that quarter, where investors will be looking toward the FOMC meeting this week for indications of what the Fed will do at that time.

Until that happens, we're afraid that we're all in for an extended and unsatisfyingly bad episode of "Will They Or Won't They?" in market-related news coverage this week. And then the calm before storm will end on Wednesday afternoon, after which, investors will switch to "Watch What Happens Next". Which should not ever be confused with a market-edition of Watch What Happens L!ve, although that might be more entertaining.

Speaking of calm before the storm, here's what an uneventful week looks like in terms of market-moving news headlines when the Fed's minions have been muffled....

Elsewhere, Barry Ritholtz listed the positives and negatives he identified from the week's news of the economy and markets.