The S&P 500 (Index: SPX) ended the third week of October 2018 much the same way as it ended the previous week, with investors appearing to split their forward-looking focus between the future quarters of 2019-Q1 and 2019-Q3. 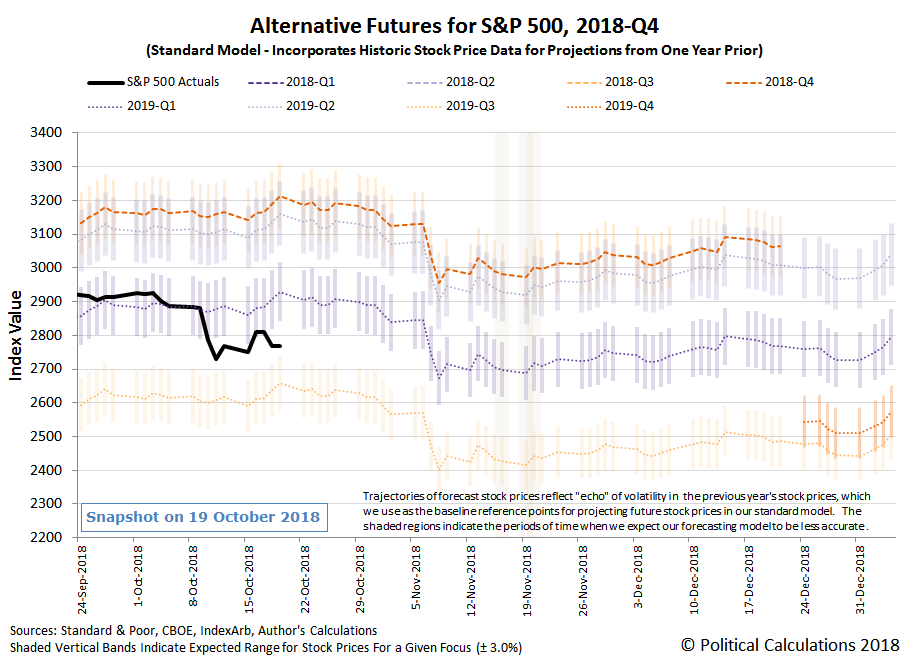 In between, the U.S. stock market continued to show signs of heightened volatility, with fourth quarter earnings pulling investors attention in one direction (upward), and concerns over the frequency and timing of future interest rate hikes by the Fed pulling it in the other (downward).

By the end of the week, investors appeared to be putting a stronger weight on the what U.S. interest rates will be a year from now (60%) than they were upon earnings to come in the nearer term (40%), as visualized by the relative spacing between the actual trajectory of the S&P 500 against the potential trajectories assocated with either 2019-Q1 or 2019-Q3 indicated in our spaghetti forecast chart.

At least, that's what we were able to glean from the market moving news headlines from the week, which provide the context of what influenced investors to go along with what our dividend futures-based model projected during Week 3 of October 2018.

Meanwhile, Barry Ritholtz outlined the week's markets and economics news' positives and negatives. There are seven of each, with an disconcerting new entry at the top of the negative column....