Ken Roberts analyzes import-export data over at Forbes, and when the U.S. trade data for August 2018 came out, he quickly found that there were some serious shenanigans going on with U.S. soybean exports, starting with a major year over year decline for shipments to China.

In U.S. Census Bureau data released Friday, China's percentage of U.S. soybean exports fell to less than 2% for the month of August. In and of itself that is a stunning and precipitous decline, even with 25% tariffs in place. What that means is that U.S. exports to China for the month are down 94.75% from the same month a year ago. China, which ranked No. 1 a year ago, now ranks No. 18 as a buyer of U.S. soybeans.

Historically, very low levels of U.S. soybean exports to China in the month of August is not unprecedented. The following chart shows our estimate of the monthly quantity of soybeans exported from the U.S. to China from January 2012 through August 2018, where we find that soybean shipments in 2013, 2014 and 2015 were also very low. 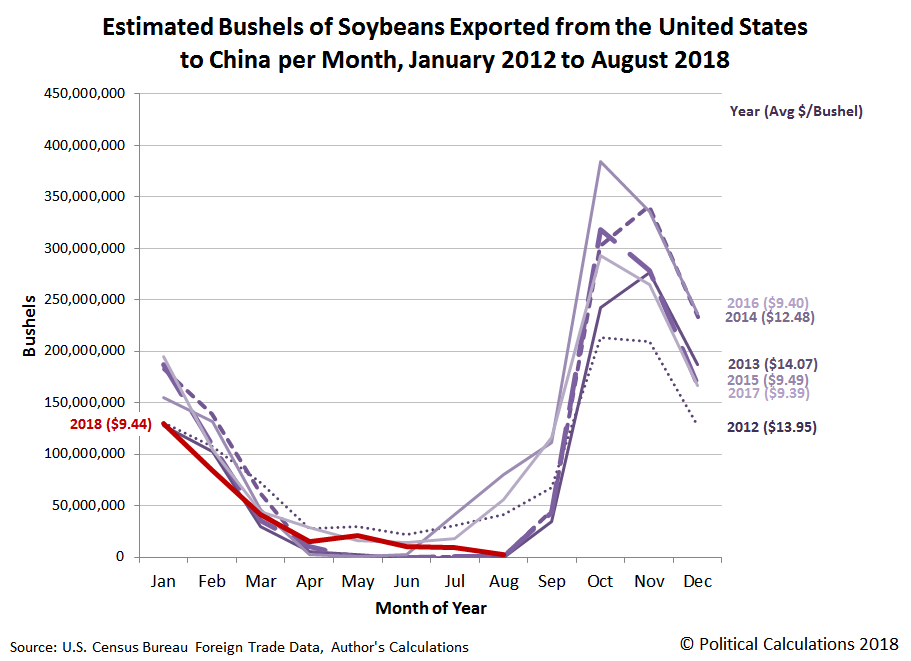 But the evidence of soybean shenanigans is to be found in the volume of shipments from the U.S. to the rest of the world.

But wait. Here's what makes me wonder what is going on: U.S. soybean exports are increasing this year, not decreasing, as you might expect. Not only in value but in tonnage as well. (So it's not a pricing fluctuation issue.)

Since we have the data, let's show how U.S. monthly soybean shipments to the rest of the world has evolved over the same period of time as our first chart. 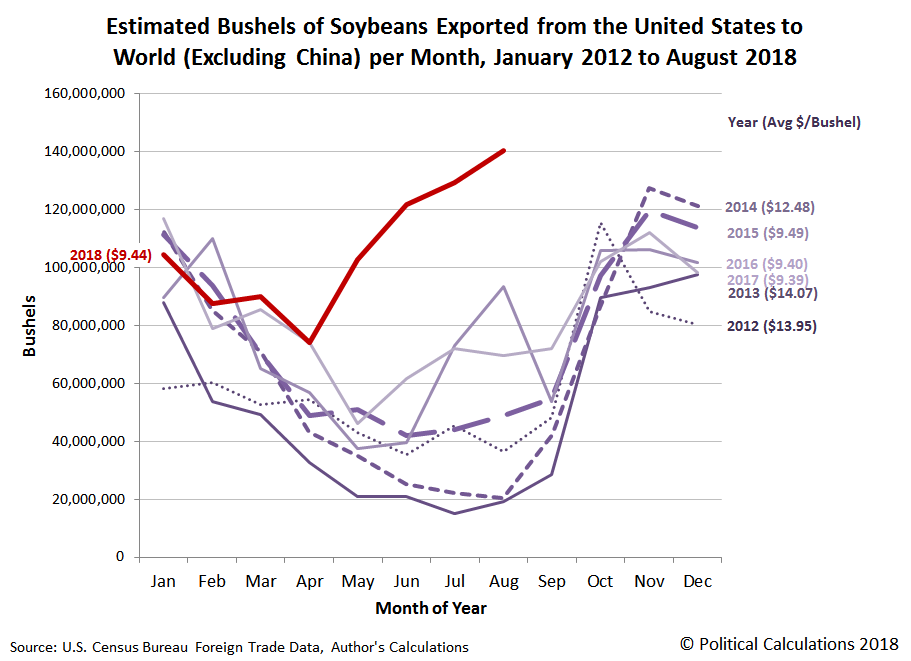 2018 is seeing a dramatic shift in the destination of U.S.-produced soybeans, where an unprecedented increase in exports to the rest of the world has been taking place since the end of April 2018.

But where else in the world are those soybeans going?

Previously, when we dug into the U.S. trade data, we found destinations that included places like Egypt, Mexico, Pakistan, and the Netherlands were the international leaders, so when we looked at the data for August 2018, we were expecting to see these same countries ranking near the top of the list.


They were there, but there was another country ranking up near the top of the list that shocked us: Iran. In August 2018, over $140 million worth of soybeans ended up in Iran, a country just recently targeted for new economic sanctions by the U.S. in May 2018.

Fortunately, Bloomberg answered that question at the beginning of July 2018.

Chinese companies are expected to cancel most of the remaining soybeans they have committed to buy from the U.S. in the year ending Aug. 31 once the extra tariff on U.S. imports takes effect from Friday.

China is the world’s top soybean buyer and has yet to take delivery of about 1.14 million metric tons of U.S. soybeans booked for the current marketing year, according to U.S. Department of Agriculture data. The USDA reported last week that China had resold some 123,000 tons of committed deliveries to Bangladesh and Iran.

That's some serious shenanigans for U.S. soybeans, where it would seem that actions taken by the Chinese are behind a big portion of the observed shift in the global supply chain for U.S. soybeans.

The next questions that the U.S. data on its soybean exports will help answer is how well China is able to execute its trade war strategy of avoiding U.S. soybeans as we ramp up to what is historically the seasonal peak months for these shipments, from September through December, and also the how well U.S. soybean producers are able to reshape their global supply chain to handle the output of the nation's 2018 harvest.