Before we get started about what happened in the U.S. stock market during the fourth week of October 2018, let's consider some wisdom from JC at AllStarCharts:

When the stock market is not going up, the blame game gets played. It’s a combination of shareholders losing money and media types needing something to say. It’s always someone or something’s fault and rarely described as a normal occurrence. The truth, however, is that yes, stocks falling in price is part of the regular cycles that we’ve always seen.

We've had a month with a lot of interesting days, where we define "interesting" as happening whenever the S&P 500 changes by more than 2% from its previous day's closing value. In the past month, most of the days that have been interesting have involved stock prices moving in the downward direction. And we'll tell you right now that JC is right. There was nothing abnormal about what happened during the past month.

In fact, once the S&P 500 began its latest Lévy flight event [1], where stock prices would go when the event was complete was completely predictable. The good news is that it's now mostly over, with investors appearing to have completed shifting their forward-looking attention from the near term future of 2019-Q1 toward the more distant future quarter of 2019-Q3, where today's stock prices are now in line with the trajectory that our dividend futures-based model projected would be the case if investors were to do that. 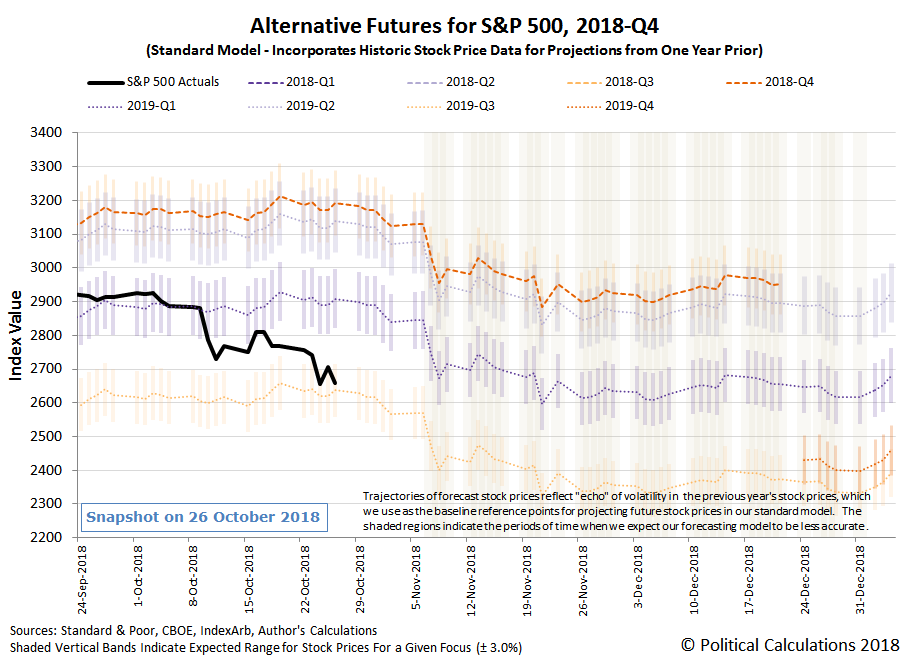 How long they keep their attention focused on that particular point on the future horizon is another matter. We don't know how long that might be. All we can tell you is that given the nature of how stock prices work, they're now likely within just a few percent of setting a bottom, if they haven't already, absent some fundamental deterioration in the expectations for dividends in the future or some noise event that prompts an irrational reaction among investors.

If the latter, then you'll have quite an investing opportunity and if the former, buckle up - you'll know which scenario applies from the news. Speaking of which, here are the headlines we noted for their market-moving potential during the fourth week of October 2018.

Elsewhere, Barry Ritholtz succinctly summarized the week's markets and economics news. We'll be back next week to cover the fifth and final week of October 2018, which will also cover the first two days of November 2018!

[1] Lévy flight events are what give changes in stock prices their fat-tailed distribution characteristic, which distinguishes how they behave from what would happen if they followed a true random walk as described by a normal Gaussian distribution. We observe these events whenever investors shift their forward-looking focus from one point of time in the future to another, where the difference in the expected change in the rate of growth of dividends per share between the two periods determines how much stock prices might change when they occur.