Political Calculations
Unexpectedly Intriguing!
October 15, 2018
The View of the S&P 500 From the Futures

The second week of October 2018 was one of the most interesting for the S&P 500 (Index: SPX) in quite some time. 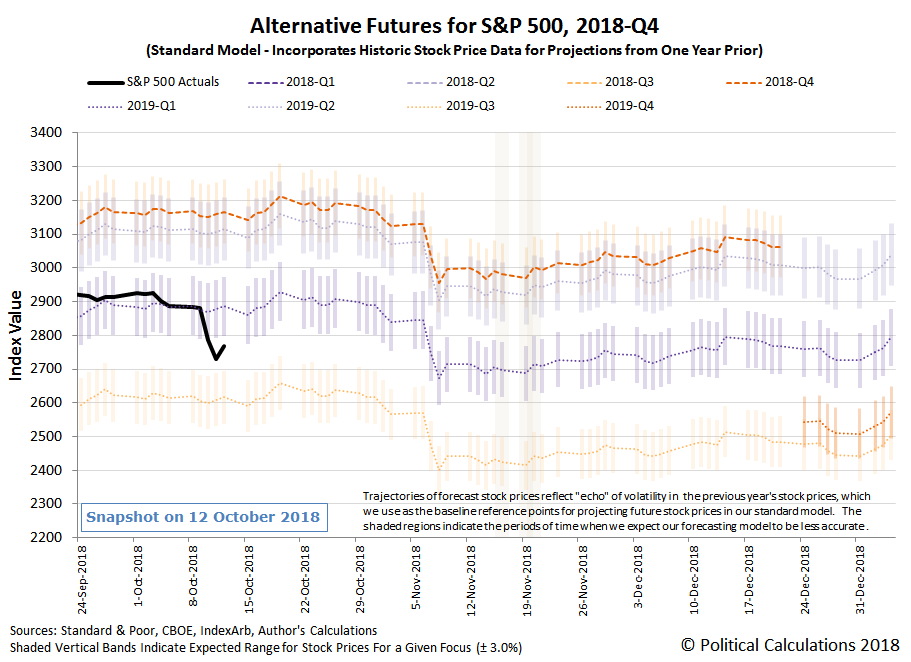 In doing so, investors moved the market by shifting their forward-looking focus from 2019-Q1 toward the more distant future of 2019-Q3. Through the end of the week on Friday, 12 October 2018, the level of the S&P 500 in our dividend futures-based model indicates that investors are splitting their attention between these two quarters, putting a slightly heavier weighting on the nearer term future of described by the expectations associated with 2019-Q1 than they are for 2019-Q3.

Why focus on 2019-Q3 at all? Starting with basic fundamentals, the dividend futures for the S&P 500 associated with this upcoming quarter have been flat at $14.00 per share since 12 July 2018, where they represent a deceleration in the year-over-year rate of growth of trailing year dividends per share for the index. As such, the expectation that the rate of growth of S&P 500 dividends, and by extension, U.S. economic growth, will slow during this future quarter has been baked into investor considerations for quite some time.

Since there has been no change in these fundamental expectations, we can rule out any growing fear of a stalling stock market and economy at this time as a causal factor behind the S&P 500's latest Lévy flight event. Ditto for any news items related to the ongoing low-level trade war between the U.S. and China, which for all the noise in the news it has generated since it began earlier this year, has not produced a noticeable impact on dividend futures to date.

What has changed very recently however is investor expectations of a Fed rate hike in 2019-Q3, which would explain why investors would focus on this particular point of time in the future at this point of time in the present. With the U.S. economy continuing to grow strongly, and with the lowest official unemployment rate since the late 1960s, the probability that the Fed will continue its series of interest rate hikes in this quarter has very recently surged above 50% according to interest rate futures. This change in investor expectations has also coincided with a period of heightened volatility in intraday stock price values, which peaked with the U.S. stock market's Lévy flight event on 10 October 2018. The following chart shows the probabilities indicated by the CME Group's FedWatch tool for upcoming rate hikes as of the close of trading on 12 October 2018.

Since the week's Lévy flight event prompted us to feature a special mid-week edition of our weekly S&P 500 Chaos series, we only have two additional days of news headlines to catch up on. Here's the rest of the week's market-moving news....

Looking for a bigger picture of the week's major economics and markets news? Barry Ritholtz' has outlined the week's positives and negatives. As a special bonus, he also wrote one of the better analytical pieces of the week: The Stock-Market Meltdown That Everyone Saw Coming! Absolutely essential reading, and the only other piece we know of that even mentioned properly mentioned random walks in describing what happened with stock prices in the aftermath of the week's Lévy flight event.