It wasn't just U.S. soybean exports that encountered some serious shenanigans in August 2018 as part of China's trade war strategy with the United States. International U.S. trade data indicates that U.S. crude oil exports to China also collapsed during the month. In this case, all the way to zero. 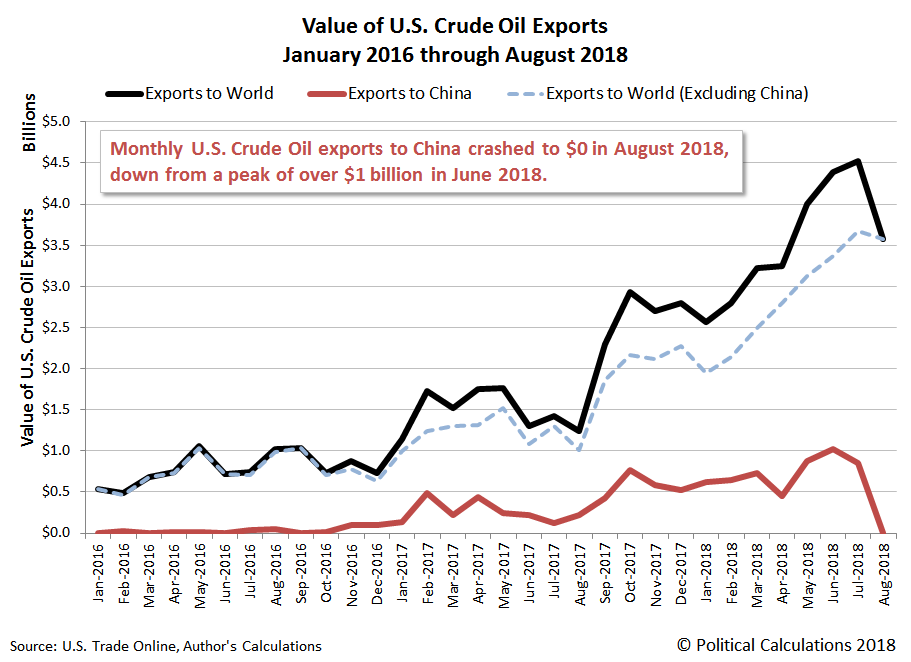 BIMCO, the world's largest international shipping association, explains what appears to have happened and its impact on the shipping industry.

In August, no US seaborne exports of crude oil to China were recorded. A massive change to the export pattern seen since early 2017. Chinese buyers, led by the world’s top tanker charterer Unipec, were rumoured to have stayed away – and new data proves it. Now rumours have it, that Chinese buyers returned in early October, data will eventually show if this is right and to what extent at a later stage.

Despite being left out of the ‘official’ trade war at the last minute, crude oil was removed from the Chinese USD 16 billion list before it came into force on 23 August 2018, crude oil exports are now taking centre stage. BIMCO’s Chief Shipping Analyst Peter Sand comments: “The tanker shipping industry is hurt when distant US crude oil export destinations like China, are swapped for much shorter hauls into the Caribbean and South, North and Central America.

Meanwhile, that it is primarily a Chinese-influenced phenomenon is verified by the near record-level of crude oil exports from the U.S. to the rest of the world, which dipped slightly in August from their record high of $3.67 billion in July 2018.

For the U.S. oil industry, China's trade war strategy may provide it with a silver lining. The industry was straining its capacity to export crude oil to meet China's demand, where the reduction in China's purchases may provide it with the breathing space it needs to complete a number of pipeline and export infrastructure projects that will ultimately allow it to export much higher volumes in 2019.

At the same time, many U.S. shale oil producers have been missing out on the recent increase in global oil prices to over $70 per barrel in mid-September 2018, where they had locked in their selling price at $55-$58 per barrel in futures contracts. After those contracts expire, should the U.S. and China resolve their trade differences, they stand to benefit from a significant windfall if prices remain elevated while the U.S.' export capacity increases.

It's a lot of ifs. Especially for trade negotiations that appear to be moving on the slow track.