Seven trading days into our redzone forecast for the S&P 500, and so far, it's holding, with the closing value of the S&P 500 (Index: SPX) falling within our target range on six of seven of those days. 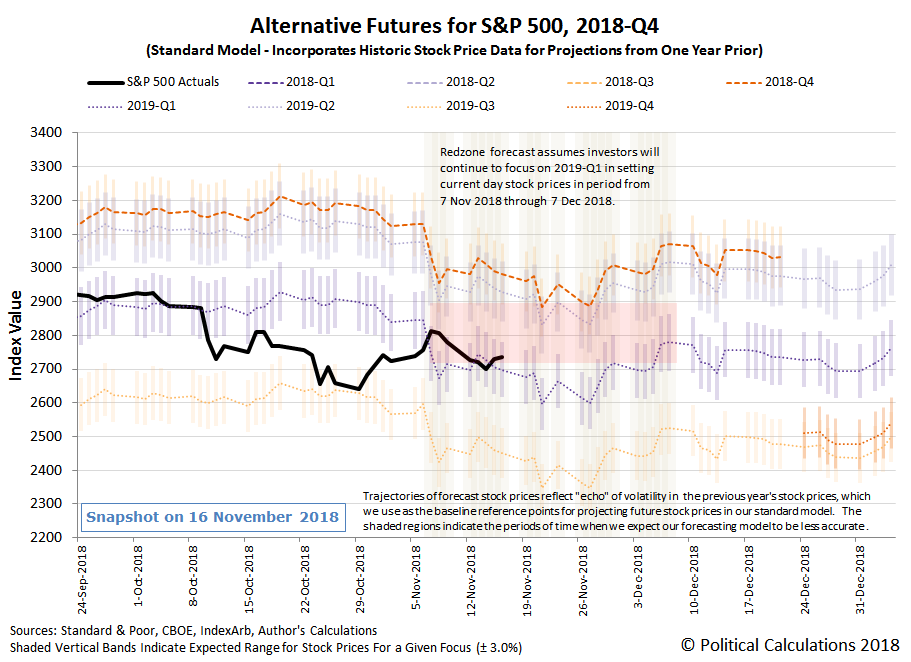 The trajectory of the S&P 500 has also been consistent with our unadjusted standard model's projection associated with the expectations that investors have for 2019-Q1 in setting today's stock prices during this period. Since that trajectory reflects the echo of the volatility that stock prices experienced in October 2018, which arises from our model's use of historic stock prices as the base reference points from which it projects potential future stock prices, we had developed the redzone forecast to compensate for its effect. Our redzone forecast assumes that investors will largely keep their forward looking attention on 2019-Q1.

Just because we've assumed that will happen does not mean that it will. It is possible that investors may shift their attention toward other points of time in the future.

Speaking of which, the large decline in oil prices and growing signs of economic slowdowns elsewhere in the world have greatly influenced investor expectations during the last two weeks, particularly where the future for interest rate hikes by the Fed are concerned.

Back then, investors were confident in their expectations that the Fed would hike its Federal Funds Rate by a quarter point in December 2018, in March 2018 and were giving just over a 50% chance they would again in September 2018.

But now, they appear to be backing off those expectations, where they would appear to now anticipate quarter point rate hikes in December 2018 and just one more in 2019, in June, according to the CME Group's FedWatch tool.

Meanwhile, the news headlines of the past week suggest that some influential Fed officials are backing off plans to steadily hike U.S. short term interest rates into 2019, which accounts in part for those changing expectations....

For a broader picture of what happened in the week that was, Barry Ritholtz found five positives and five negatives among the week's major economy and market-related events.

That's it for this edition of our S&P 500 chaos series. We'll see you again after Thanksgiving!