The city of Philadelphia is continuing to experience shortfalls in the monthly revenues it collects from its controversial soda tax. As a result of those ongoing shortfalls, Philadelphia Mayor Jim Kenney's Rebuild initiative is being significantly scaled back from the levels that city officials have promised city residents.

The following chart shows the amount of revenue that the city has collected through the Philadelphia Beverage Tax assessed in the months of January 2017 through August 2018. In the chart, the blue "Desired" line shows the amount of tax collections that city officials originally expected to collect throughout 2017, while the red "2017" line shows how much the city actually collected from its soda tax in each month of that year. The red 2017 line subsequently became the city's expected revenue for its soda tax in 2018, whose actual level of revenues are indicated by the green "2018" line. 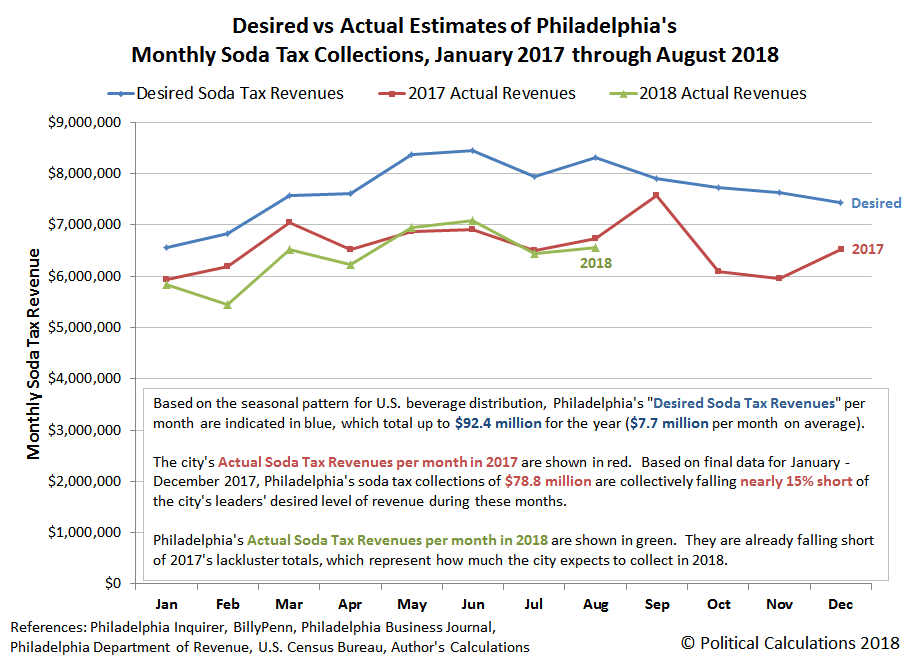 Through August 2018, Philadelphia is running about $1.6 million short of its expected revenue levels for the calendar year, and about $10.5 million below its original revenue expectation for the first eight months of collections for its soda tax.

City officials passed Philadelphia's soda tax into law by promising to use 100% of the money it would collect to fund "free" pre-Kindergarten programs in the city, community schools, and the mayor's Rebuild initiative, which would fund repairs and improvements to city parks, libraries, recreation centers and playgrounds.

With the city's soda tax collections persistently falling short of expected levels, one or more of these spending programs would have to pay the price by being scaled back, where the city's Rebuild initiative appears to have become the designated loser.

That much became evident last month when Mayor Kenney began walking back promises to fund $500 million worth of improvements to the city's public infrastructure.

The glowing "First 1,000 Days" report [pdf] released Oct. 1 by Mayor Jim Kenney contained 15 mentions of Rebuild, the most expensive and highest profile initiative of Kenney's first term. But unlike past mentions of the heralded program, these didn't include the $500 million price tag that the administration has used consistently since it introduced the program in 2016.

"Through the Administration’s signature infrastructure initiative Rebuild, we're investing hundreds of millions of dollars in our neighborhoods by renovating our aging recreation centers, playgrounds, parks, and libraries," the report reads.

The subtle adjustment to “hundreds of millions” may seem innocuous yet it portends an intentional shift that could result in fewer dollars reaching neighborhoods hungry for functional, decent places to play and learn.

Philadelphia is reliant upon the taxes it collects through its soda tax to support the borrowing it needs to fund the Rebuild initiative. With those revenues falling over 17% short of the city's original expectations, the mayor has scaled back the city's planned commitment for the Rebuild initiative from $500 million to $348 million, a 30% reduction. The difference between the percentage for the city's soda tax revenues and its funding commitment confirms that the Rebuild program is bearing a disproportionately larger share of Philadelphia's failure to collect its desired level of revenue through its soda tax.

That outcome could have been avoided if only Philadelphia's residents were more willing to pay the city's soda tax instead of engaging in tax avoidance behaviors. It's as if they don't care enough about what city officials want....