Political Calculations
Unexpectedly Intriguing!
November 5, 2018
The S&P 500, the Fed and a Smoking Gun in October 2018

Expectations about future of interest rate hikes by the U.S. Federal Reserve played an outsized role in setting stock prices during the month of October 2018.

If you recall, back at the beginning of the month, investors were largely focused on 2019-Q1 in setting stock prices, where they began the month near their all-time record levels. That seemingly stable set of affairs began to change dramatically after 3 October 2018. On 4 October 2018, the S&P 500 began to slide, slowly at first, but then significantly, as stock prices entered into a new Lévy flight a week later, as investors were shifting their attention toward 2019-Q3.

That continued until the end of the market's Lévy flight event was reached on 29 October 2018. After which, investors appear to begin shifting their forward-looking attention back toward the nearer term future described by the expectations associated with 2019-Q1. At least they did through Thursday, 1 November 2018, where on Friday, 2 November 2018, they appeared to shift their attention once again toward 2019-Q3. 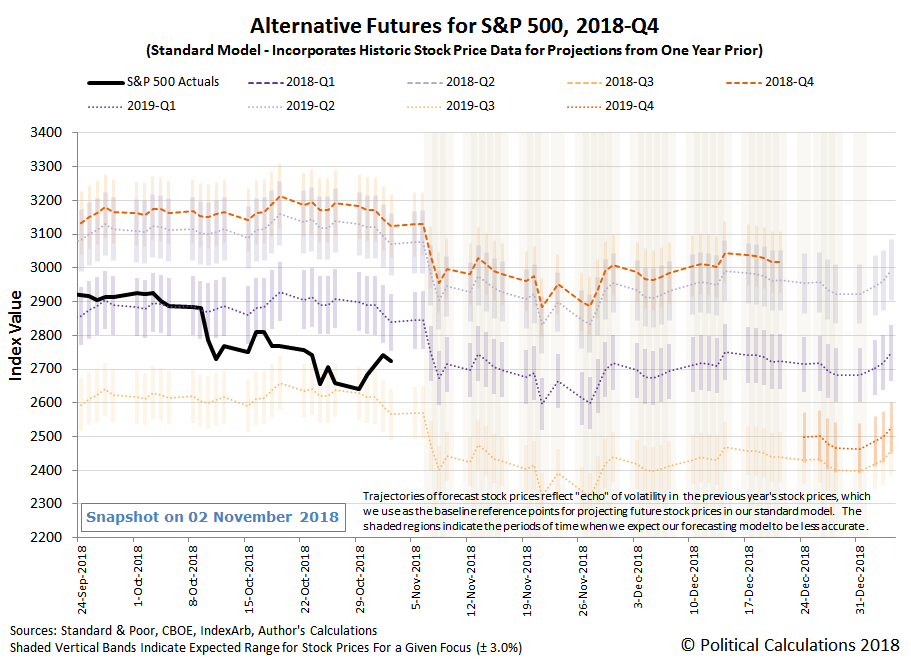 How does the Fed and expectations about its plans for future interest rates play into all this action, especially in the period since 3 October 2018? Ed Yardeni provided the key observation that explains why the market began to turn south at that time.

I am convinced that last month’s stock market rout started on October 3, when Fed Chairman Jerome Powell said in an interview with Judy Woodruff of PBS: “The really extremely accommodative low interest rates that we needed when the economy was quite weak, we don’t need those anymore. They’re not appropriate anymore.” CNBC also reported that Powell said: “Interest rates are still accommodative, but we’re gradually moving to a place where they will be neutral. We may go past neutral, but we’re a long way from neutral at this point, probably.” The CNBC article was alarmingly headlined as follows: “Powell says we’re ‘a long way’ from neutral on interest rates, indicating more hikes are coming.”

That interview was aired during the evening of 3 October 2018, where its impact would begin to be felt on the very next trading day.

We had independently observed that investors were shifting their forward-looking attention toward the more distant future of 2019-Q3, where we had identified the reason for the shift in focus to that particular future quarter as being tied to the timing of when the probability that the Fed would hike short term interest rates in the U.S. up to a target range of 2.75%-3.00% had risen above 50%, which had just happened on 3 October 2018 and which spiked upward on 4 October 2018, following the Powell interview. We believe it is the smoking gun where the start of the S&P 500's correction is concerned.

The following chart shows how that probability has evolved from the end of the first week of trading in 2018 through the trading week ending on Friday, 2 November 2018. 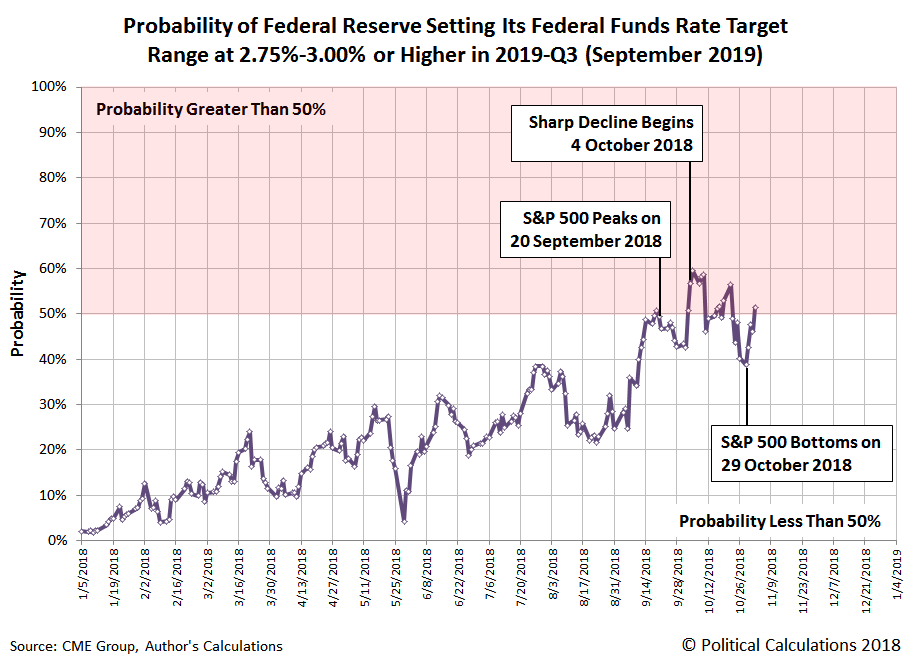 The trend in the chart also provides an explanation for why investors would appear to have turned some of their forward-looking attention back toward 2019-Q1, which prompted a rally in stock prices during the past week: the probability of a future rate hike by the Fed in 2019-Q3 having dropped back below the 50% mark during the last week of October 2018. On Friday, 2 November 2018, that probability spiked back up above 50% and stock prices dipped as investors returned some of their focus back to 2019-Q3, thanks in part to the strong jobs report that came out earlier that day.

Speaking of news reports, here are the main headlines that we noted for their market-moving potential during the fifth and final week of October 2018. Note the lack of statements from the Fed's minions - they're in a blackout period for public comments ahead of the FOMC's next two day meeting on Wednesday and Thursday this week.


Barry Ritholtz listed seven positives and negatives he found in the week's markets and economics news, where he described one of the negatives as "not a bad thing". What does that mean? You'll want to click through to find out!...