As long time observers of stock prices, we don't start getting excited about any single day change in their level unless they go up or down by more than two percent. But when they change by more than three percent within a single day, we get excited because that means that it is very likely that stock prices may very likely have entered into a Lévy flight.

What's a Lévy flight, you ask? Where stock prices are concerned, it is similar to a random walk, but with one big difference. Instead of having the sizes of all the movements be relatively small and similar in size to one another, as we find in a statistical random walk, the size of some of the movements are disproportionately large compared to most of the others. More so than would be predicted by a normal distribution.

But, stock prices do not behave normally over time, where the number of occurrences of these large single day movements is greater than would be predicted if a normal Gaussian distribution applied. The variation in stock prices instead appears to be better described by a Lévy distribution, which is similar to a Gaussian distribution, but has fatter tails, corresponding to a higher rate of occurrences for sudden large movements.

And that brings us to today, because we're seeing the third Lévy flight event of 2018, following the first in January and the second in February. Here's what October 2018's event looks like on our spaghetti forecast chart for the S&P 500. 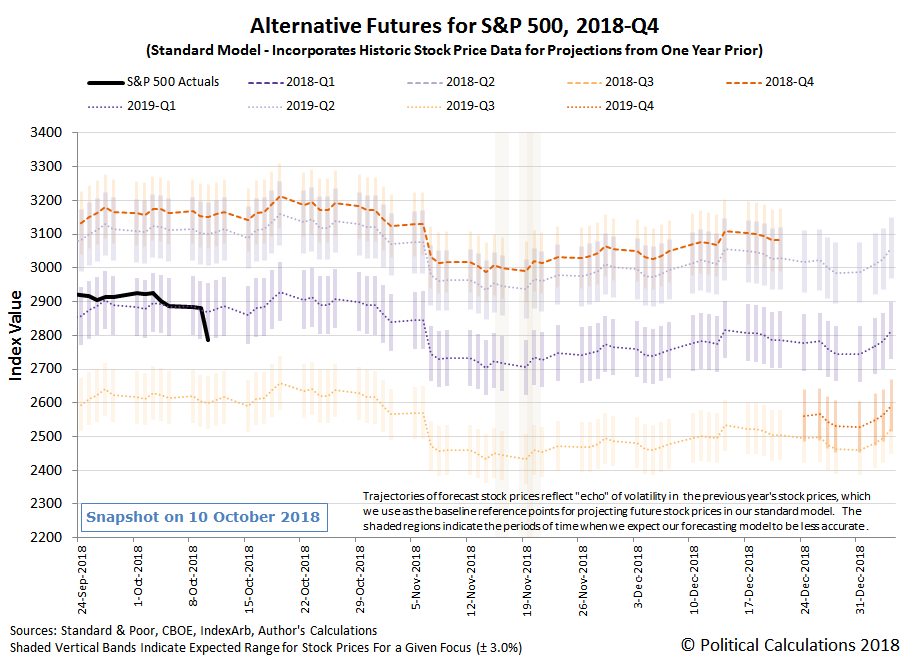 For our dividend futures-based model of how stock prices work, we typically see the stock market enter into Lévy flight whenever investors suddenly shift their forward-looking attention from one point of time in the future to another. The size and direction of the change that occurs is then influenced by the change in the growth rates of dividends that are expected to be paid at the two points of time in the future.

That gives the change in stock prices during Lévy flight events their quantum random walk-like characteristics. While the onset of these events is almost always random, what stock prices do after they begin has been predictable, where we have nearly 10 years of observations to back our discovery of the phenomenon.

Here's what that means for the stock market today. Going into the second week of October 2018, investors had been closely focused on the future quarter of 2019-Q1 in setting stock prices, which can be seen in how closely the actual trajectory of the S&P 500 was tracking along with our model's forecast trajectory associated with 2019-Q1.

Until 10 October 2018, when investors suddenly shifted their attention toward a different point of time in the future, which our spaghetti forecast chart suggests is 2019-Q3, which corresponds with a deceleration in the expected growth rate of dividends.

What we don't have as yet is a clear reason why they would suddenly shift their attention to this more distant future quarter. To find out if there is a clear suspect, we checked the dividend futures data to see if there had been any meaningful change in the expectations for future dividend payments. There wasn't, so we ruled out a fundamental change in expectations as a potential causal factor.

The expectation that the Fed might hike the target range for its Federal Funds Rate up to 2.75-3.00% by the end of 2019-Q3 is something that appears to have just developed a greater than 50% probability of happening during the past week, and particularly in the past few days. Coincidentally, on 10 October 2018, one of the Fed's minions indicated that they expected that the Federal Funds Rate would rise up to this range, while the report that included this new information also indicated that most other Fed officials believed they would need to increase the rate higher still.

So that's our leading candidate for explaining why investors would trigger a new Lévy flight for stock prices by shifting their attention from 2019-Q1 toward the more distant future quarter of 2019-Q3. But it may not be the only contributing factor, where the major market-moving news headlines of the week-to-date may indicate more possible suspects.

The good news, if you can call it that, is that if investors have shifted their attention toward 2019-Q3 as they set current day stock prices, it puts the short term floor for what's happening to the S&P 500 around 2,600, plus or minus three percent, and in the absence of any significant deterioration in the level of dividends expected to be paid out between now and then.

The bad news, at least for us, is that the new Lévy flight event is creating an echo in our model's projections of future stock prices, for which we'll need to develop a new redzone forecast to compensate.