November 2018 marked a generally solid and otherwise unremarkable month for the U.S. stock market's dividend payers. And with that being the case, we took advantage of the opportunity to do some minor rework to the main charts we present in our "Dividends by the Numbers" series.

Starting with our chart showing the monthly number of dividend increases and reductions!... 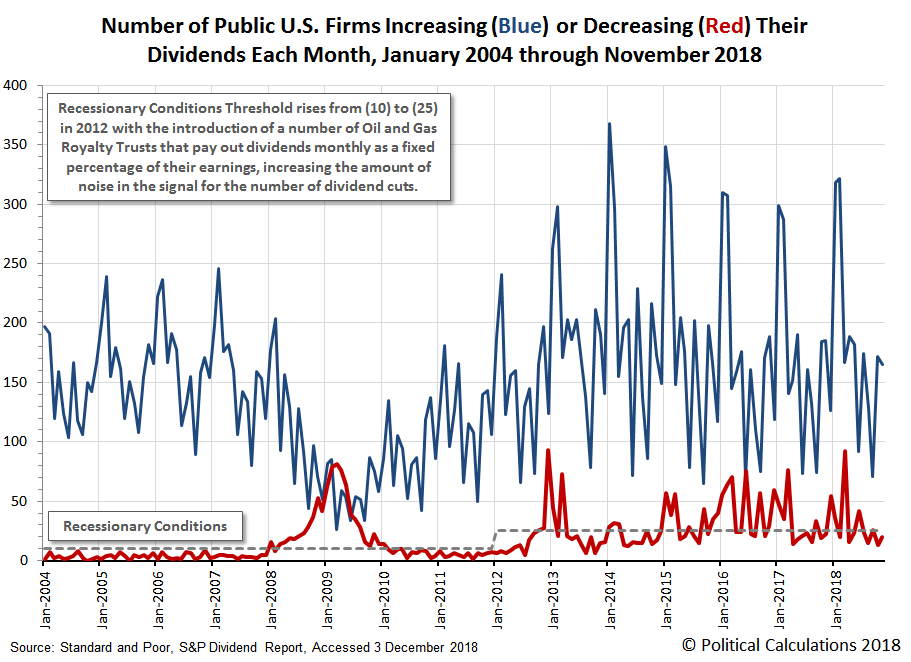 The main change here is that we're revising the threshold for the number of dividend reductions that corresponds to recessionary conditions being present in the U.S. economy. This change reflects the addition of a number of oil and gas royalty trusts (mainly related to new oil shale drilling firms) whose stocks began publicly trading circa 2011-2012, and whose dividends are paid out monthly as a fixed percentage of their earnings rather than being set independently.

To compensate for the much increased level of noise in the number of dividend cuts announced each month since January 2012, we've raised the threshold indicating recessionary conditions being present in the private sector of the U.S. economy from 10 to 25. Our next chart zooms in on just the lower portion of the first chart to focus only on the reported number of dividend cuts. 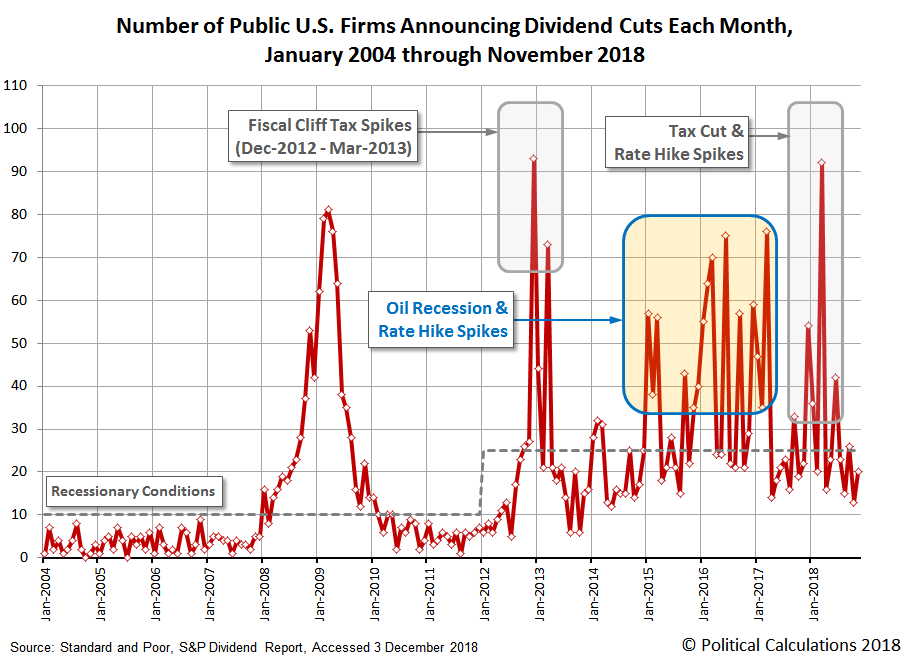 Following the so-called "Great" Recession, an elevated number of dividend cuts has been associated with two main phenomena: economic distress or changes in tax policies. Economic distress is self-explanatory, where when the business environment for companies dims to the point where they struggle to earn profits or to sustain the cash flow needed to pay out dividends to their shareholders, dividends get cut, which is what makes this measure a very simple indicator of the health of the economy.

Meanwhile, because influential shareholders have the ability to control the timing and amount of dividends they might receive, changes in tax policy can also have a visible effect on the number of dividend cuts announced each month, where this impact typically occurs in the final quarter of a calendar tax year and the first quarter of the next tax year.

That's enough discussion on the changes we've made to the presentation of our charts. Let's get to the numbers behind November 2018's dividend metadata!...

The changes to the charts aren't the only change we're introducing this month. We've also added a level of artificial intelligence to automate the reporting of these monthly figures. Because Ironman is slowly becoming A.I. (but is already self-aware!)

We'll drill down to do more analysis of the firms that announced dividend cuts in November 2018 later in the month.