If that's not a term you're readily familiar with, here's what that means. A Lévy flight is similar to a random walk for stock prices, but instead of the relatively small changes in stock prices that characterize a true random walk, it is characterized by the sudden emergence of comparatively large changes - more so than would be predicted by a normal distribution.

From our perspective, Lévy flight events can occur whenever investors shift how far forward in time they are looking into the future as they go about setting current day stock prices, where the differences in expectatations for the sustainable portion of future earnings associated with these different points of time drive these outsized changes in stock prices. For the first Lévy flight event of 2019, that shift appears to be from the distant future quarter of 2019-Q4 back to the current quarter of 2019-Q1. 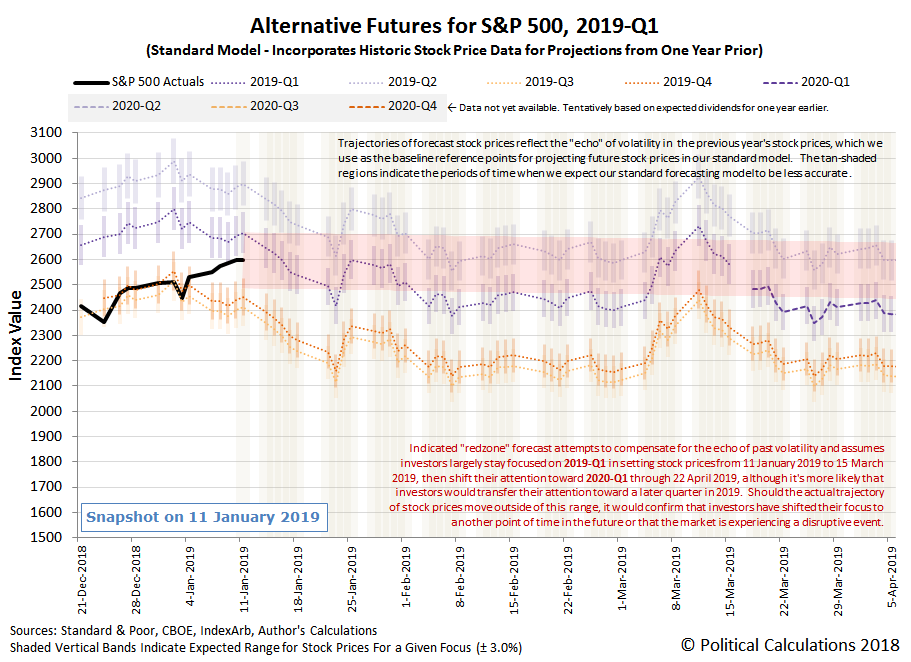 It was even sort of predictable, where we described what would happen if investors acted to shift their forward-looking attention just as they appear to have, well before the market even opened last week.

Meanwhile, because we've now entered the period of time where it will be relevant, we've redrawn our redzone forecast to correspond with this selection, anchoring its starting point with where the S&P 500 closed on Friday, 11 January 2019. If you want to know more about our assumptions in generating the forecast, we've incorporated them in the annotations on the chart.

With the Fed's future actions now fading into the background noise after dominating much of the market-related news headlines last week, we can perhaps look forward to investors sustaining their focus on 2019-Q1 as earnings season gets under way in the week ahead. That should mean the end of the first Lévy flight event of 2019, with smaller stock price movements from day to day, but this is also when a number of companies will change investor expectations for the future, which can change stock prices as investors rapidly absorb all new information.

Speaking of new information, here are the major market-moving headlines from the past week....


Barry Ritholtz listed the week's positives and negatives in his weekly succinct summary of the major economics and market-related news, and deployed the word "stalement"! What does that mean? It's defined in the Urban Dictionary!...