Plants appear to have their own secret language.

That controversial observation has been the focus of biologist Richard Karban's work for a number of years, which we'll introduce with the following four-and-a-half minute TEDEd animation that was produced several years ago, after Karban resuscitated what had been a debunked concept in the field with his findings from new, more rigorous research.

If plants communicate with each other, knowing how and why they are communicating could have a very large impact on many fields. In 2013, Karban reflected on the potential for future applications:

Plant communication may still be a tiny field, but the people who study it are no longer seen as a lunatic fringe. “It used to be that people wouldn’t even talk to you: ‘Why are you wasting my time with something we’ve already debunked?’” said Karban. “That’s now better for sure.” The debate is no longer whether plants can sense one another’s biochemical messages — they can — but about why and how they do it. Most studies have taken place under controlled lab conditions, so one of the major open questions is to what extent plants use these signals in the wild. The answer could have big implications: Farmers might be able to adapt this chatter, tweaking food plants or agricultural practices so that crops defend themselves better against herbivores. More broadly, the possibility that plants share information raises intriguing questions about what counts as behavior and communication — and why organisms that compete with one another might also see fit to network their knowledge.

Plants however also appear to communicate within themselves as they respond to the complex stimuli in their environment, which is something that previous models of plant growth have not incorporated. While not the kind of inter-plant communication being actively researched by Kaplan and other biologists, this internal dialogue, or intra-plant communication, would appear to have considerable influence over how plants grow.

That's the insight that four researchers at the Gran Sasso Science Institute (GSSI) and the Istituto Italiano di Technologia (IIT) in Italy, Fabio Tedone, Emanuela Del Dottore, Barbara Mazzolai, and Pierangelo Marcati, have developed in applying math to model how individual plants behave in response to the complex stimuli they receive in their environment. Here's a brief summary of what they set out to achieve in the press release announcing the preprint of their paper at bioXriv:

... the researchers set out to develop a mathematical model that describes the dynamics of intra-plant communication and analyses the possible cues that activate adaptive growth responses in a single plant. This model is based on formulations about biological evidence collected in laboratory experiments using state-of-the-art techniques.

Compared to existing models, their model covers a wider range of elements, including photosynthesis, starch degradation, multiple nutrients uptake and management, biomass allocation, and maintenance. These elements are analyzed in depth, considering their interactions and their effects on a plant's growth.

To validate their model and test its robustness, the researchers compared experimental observations of plant behavior with results obtained when applying their model in simulations, where they reproduced conditions of growth similar to those naturally occurring in plants. Their model attained high accuracy and minor errors, suggesting that it can effectively summarize the complex dynamics of intra-plant communication.

In doing that, they were able to effectively model the plant growth described in the biological research they surveyed with 11 nonlinear equations: 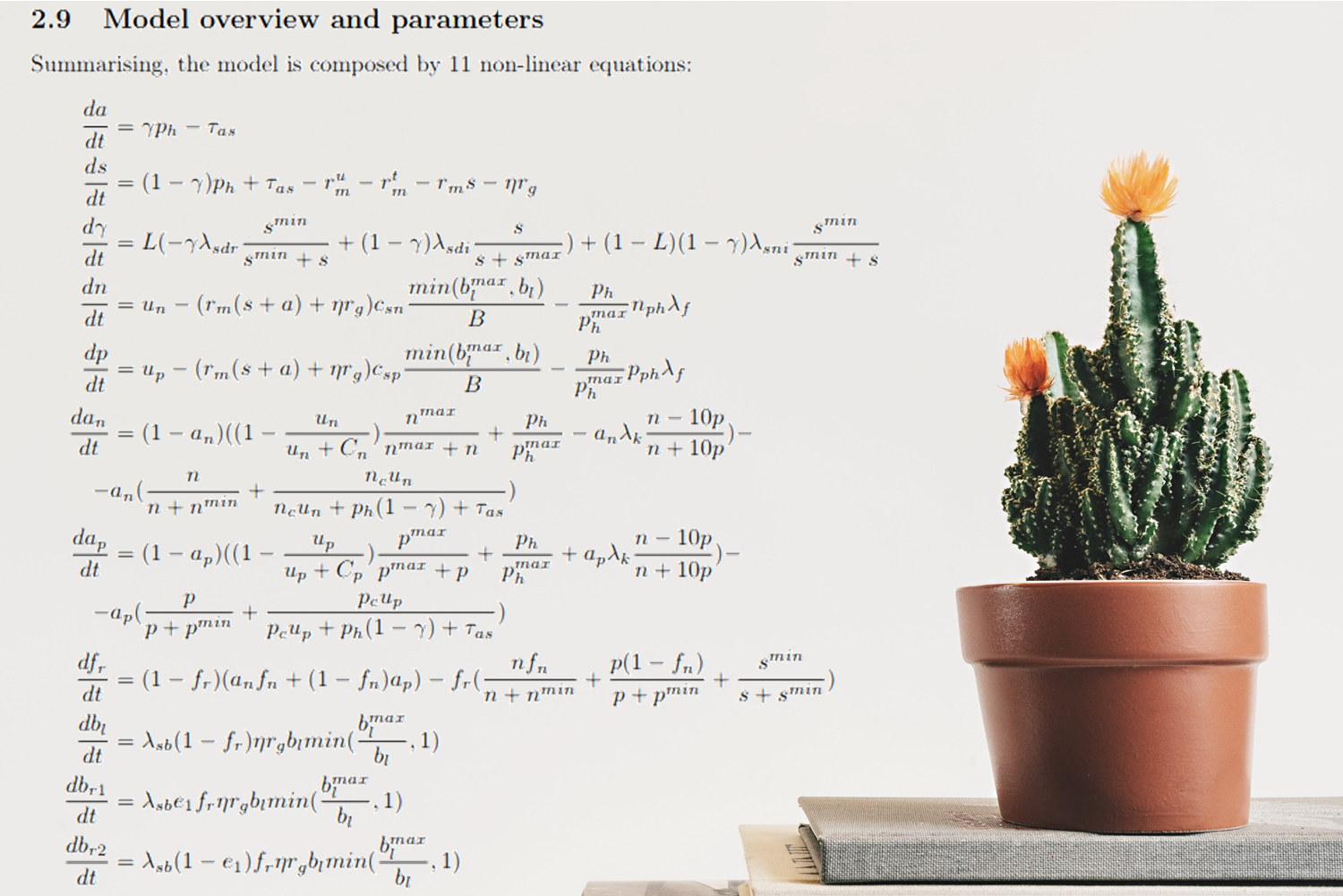 For our money, here was the most interesting finding in the paper's conclusion, which would come into play whenever Liebig's Law of the Minimum might apply:

Interestingly, in stress conditions, e.g. when the saturating thresholds were reached, the dynamics showed a fast adaptation of the plant with a self-optimisation of internal resources and feedback stimuli, without the need of a a-priori optimisation assumption. The same self-adaptive behaviour was evident when branching vs elongation was analysed. This optimising behaviour is realistic but difficult to be biologically demonstrated. However, differently to some models [4, 19] that directly start by assuming the existence of an internal optimisation function which drives plant dynamics, in here we demonstrated it to be a consequently behaviour emerging from the dynamics of internal processes. Therefore, our model enforces the idea of an emerging behaviour in plants making use of an internal communication network for optimising the use of the internal resources, the exploration of the soil and the adaptation of internal processes, and results in an efficient growth strategy.

Plants aren't just efficient, they're economical in the I, Pencil sense!