When it first went into effect in January 2017, Philadelphia's city officials had high hopes for its new tax on the distribution of naturally and artificially sweetened beverages for retail sale within the city. Counting on getting $92.4 million a year in new revenue from the new tax, Philadelphia politicians had already decided how they would spend the money, dividing it between a new universal pre-K school/day care program, community schools and initiatives to improve or repair public parks, recreation centers, and libraries. Meanwhile, at least one politically connected union official had darker ambitions for the new tax, hoping it would cost at least 100 jobs for members of a rival labor union.

By the end of its first year, it was evident that Philadelphia's soda tax collections were falling flat, as the city only raised $78.8 million. Now, through the end of is second full year of being in effect, the city has collected even less revenue from the tax, with $76.5 million going into the city's coffers. 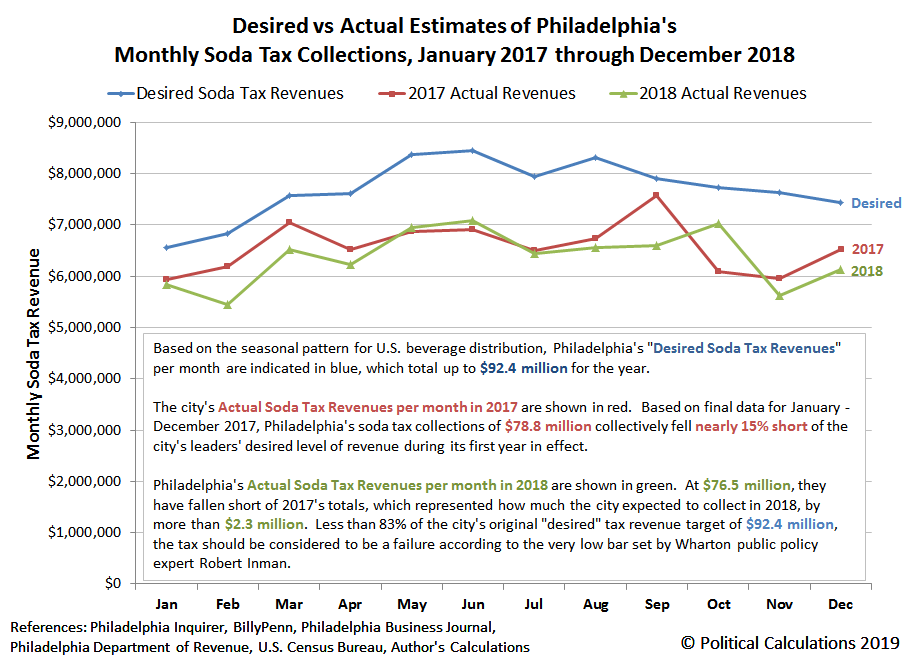 Consequently, Philadelphia's mayor and city council have scaled back their spending ambitions for the funds they receive from the city's controversial soda tax, limiting the growth of its "free" pre-K program to 5,500 seats rather than the originally planned 6,500, leaving a thousand children of the city's lowest income-earning parents out in the cold. The city has also reduced its plans to add community schools in the city from 25 to 20, but the biggest cuts have weighed upon the city's Rebuild initiative for improving civic infrastructure, which was slashed by 30%.

The only thing from Philadelphia's soda tax that happened as hoped was the 100 job losses targeted at local union jobs, although here, job losses traceable to the Philadelphia Beverage tax extend to many other jobs as well, particularly for soft drink retailers.

After two years, Philadelphia's city council may have had enough of unreliable revenue collections from the tax, where Maria Quiñones-Sánchez introduced a bill to phase out the unpopular tax on 14 March 2019. The city council subsequently voted to fund an independent study of the tax and its impact.

Meanwhile, a new poll of 600 Philadelphia residents finds that 60% want the tax repealed.

Ernest Owens, writer at large for Philadelphia magazine, editorializes on the moral case for why he believes Philadelphia's soda tax should be repealed:

No matter how anyone tries to reframe it, the soda tax is a regressive levy that disproportionately impacts Black and brown communities in the poorest major city in America.

The premise of the soda tax is illogical: For money to be raised to fund pre-K, community schools, and recreation centers, people have to buy soda and other sugary beverages — meaning we have to consume items that are killing us in order for the city to afford our children the opportunity and access to thrive. Which means that if you are someone concerned with public health and inequity but make it a point yourself to avoid beverages that contain sugar, you have essentially declined to support these programs.

Can anyone not see how counterproductive all this is? The soda tax requires that we make our present worse to ensure a better future — without considering how the former affects the latter.

Among soda taxes that have been implemented in various jurisdictions around the world, the Philadelphia Beverage Tax is especially perverse in its outcomes.