Historically, that has been an omen for the onset of recessions in the U.S. economy, and may be again, though at this point, it mainly reflects the spread of what has been a significant deterioration in the global economy, particularly in China and, where new developments were concerned on Friday, 22 March 2019, in the Eurozone. Given that timing, the recent decline of the U.S. 10-Year Treasury could perhaps be interpreted as a flight-to-quality, where U.S. treasuries look to be a relative safe haven for international bond investors.

Regardless, that global development represents a negative headwind for the U.S. economy, which sent stock prices notably lower for the week. After having ridden along the upper edge of our redzone forecast range, we find that the level of the S&P 500 has now dropped well back within it. 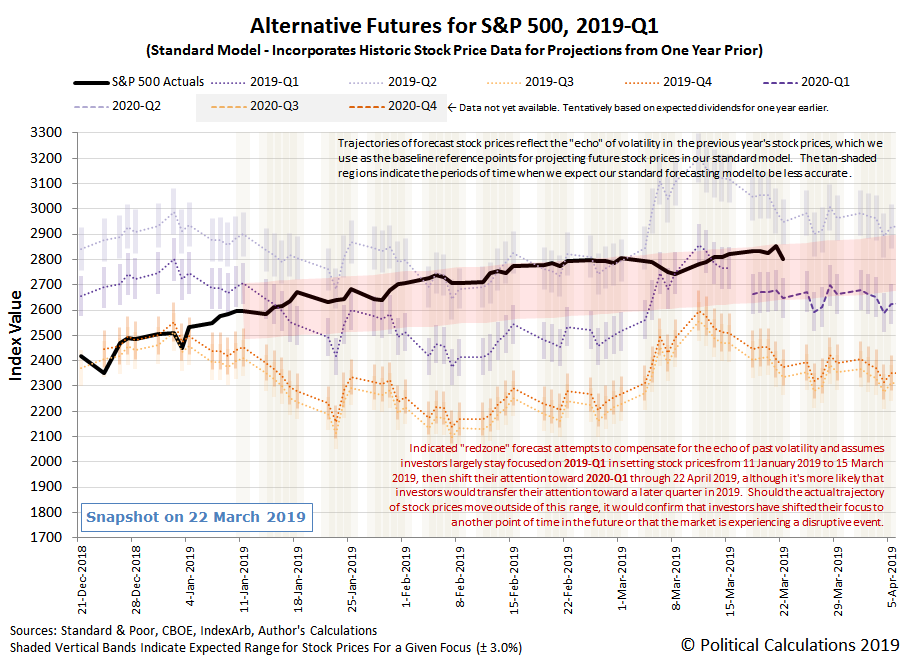 We're looking more at the deterioration in the global economy than we are at the U.S. economy as a leading explantion for Friday's market decline because investors had the opportunity earlier in the week to react to news that the outlook for the U.S. economy would likely be worse than previously expected when the Fed sigificantly lowered its economic forecasts and surprised investors that it would end its quantitative tightening policies by September 2019. Stock market investors had more than ample time to react negatively to that news, and yet, did not change stock prices meaningfully when that news came out on Wednesday, 20 March 2019.

In a world where we've routinely documented major stock price movements beginning within a two-to-four minute window of when investors responded to news they weren't expecting, it was an eternity before Friday's negative reaction to other news came about - in this case, several hours before the market opened, sending stock prices lower from the outset.

That's why we pay attention to the market-moving news headlines, which you'll notice have nothing to do with a man named Mueller!

The Big Picture's Barry Ritholtz picks out six positives and negatives from the week's other markets and economy news, where the man named Mueller shows up in both categories. We're at the end of one era and the beginning of another for the kind of useless political noise we'll need to filter out.