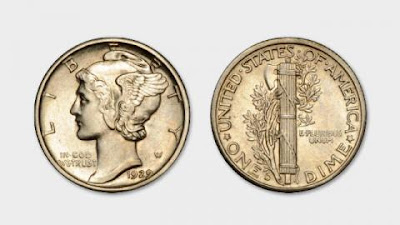 Have you ever found a U.S. dime minted before 1965 in your change?

We ask, because 1964 was the last year in which U.S. coins with a face value of 10 cents or more were produced by the U.S. Mint were mostly made out of silver [1]. During the next 10 years, the price of silver rose, then skyrocketed in the mid-to-late 1970s, giving Americans a strong incentive to pluck any these silver coins out of circulation [2] because they became worth more than their face values.

By the 1980s, it was extraordinarily rare to find any pre-1965 silver coin in your change. Today, it has become exceedingly rare.

But next week, it may become a just a bit more commonplace.

As part of National Coin Week, which runs from 21 April 2019 through 28 April 2019, coin dealers across the U.S. plan to return up to one million vintage or collectible coins back into circulation, where they may very well turn up in your change. What they hope will be The Great American Coin Hunt will be on!

Not all the coins they put back into circulation in this Willy Wonka-fashion will be silver. The dealers will release a variety of coins dating back as far as the 1800s into the wild, so to speak, where anyone paying cash and getting change back may be in for a neat surprise.

If that's you, happy hunting!

[2] For an anecdotal history of the disappearance of silver-based coinage in the U.S., check out this discussion thread at the Metal Detecting Forum.